Is there a future in Vancouver for Jake Virtanen?

Nothing sets up a rebuild quite like a top draft pick, right? Usually. But by the time you whittle your way down to the sixth overall pick, you’re in borderline crapshoot territory.
Apr 17, 2017 2:25 PM By: Will Graham 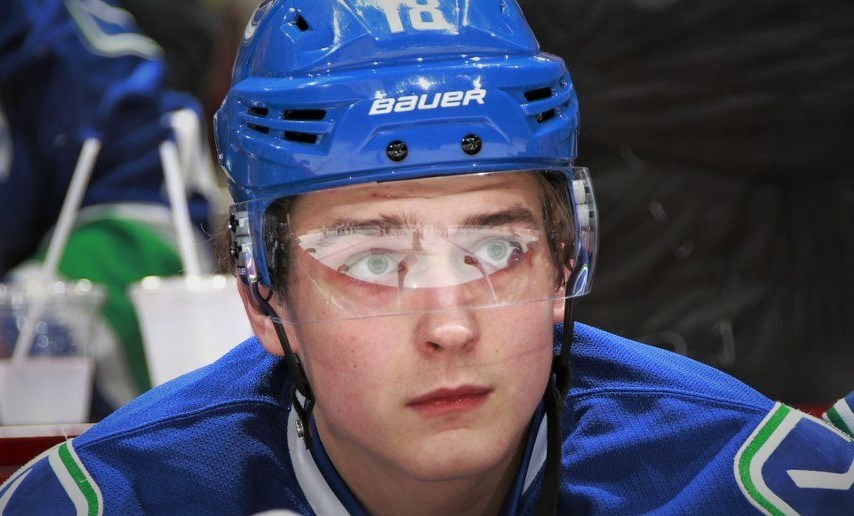 Nothing sets up a rebuild quite like a top draft pick, right?

Usually. But by the time you whittle your way down to the sixth overall pick, you’re in borderline crapshoot territory. You could land a tasty fish like an Oliver Ekman-Larsson or a Sean Monahan, or you could reel in a slimy, inedible Brett Connolly or Nikita Filatov.

But it’s hard to argue that Vancouver’s 2014 catch could look any less appetizing.

The Utica Comets’ AHL season just ended. With them, Jake Virtanen put up a miserable 19 points in 65 games.

For anyone counting, that places him 12th in team scoring, right behind scoring behemoths Chad Billins and Carter Bancks.

As an uncomfortable underscore to his underwhelming play, see exhibit NikolAy.

Nikolay Goldobin, transferred to the Comets after Vancouver’s season ended, put up four goals in three games. All of those markers looked utterly effortless, particularly this one. And these ones. Goal-dobin indeed.

Nikolay was drafted the same year as (but 21 spots after) Virtanen. He is a proven AHL scorer with all the confidence in the world at that level. It’s clear he doesn’t belong down there anymore.

Meanwhile, Jake has done little to inspire any confidence. (If one more person utters the words “flashes of brilliance” regarding Virtanen, I’ll smother them with my Zack Kassian jersey.)

It’s clear to all of us that Virtanen was a reach at sixth, right? (I’m going to assume you’re all nodding obediently.) If not, please remember that the three players I had ahead of him (Nick Ritchie, Nikolaj Ehlers and William Nylander) are all bonafide NHL players right now. Two are stars.

As they limp away from a season to be forgotten, watching other young, fast NHL teams enjoying the bright lights of the playoffs, it’s never been clearer that Vancouver needs to build on youth.

So then, what should the Canucks do with young Mr. Virtanen? Is there any chance he has a future in Vancouver?

Of course! Take that Betteridge! Here are your optimistic talking points:

But honestly, there is one red flag that outweighs all of these finer points: I don’t believe he thinks the game at an NHL pace yet. And I find that troubling.

Hockey intelligence is a much-vaunted and rare quality that’s almost essential to be a top-six player in today’s NHL. In a nutshell, you need to anticipate where the play is going and thereby play your part most effectively.

Contrary to popular belief, you don’t need to be a scorer to have it. Daniel and Henrik Sedin are paragons of this quality, but top level hockey IQ is found in varying degrees up and down any NHL lineup.

For all the checks he lays and speed he flashes, if Jake cannot reliably keep up with the play night in and night out, he won’t be given the nod by any coach.

I hope Virtanen puts his game together next season. Another year of percolation in the minors is a must, and I pray that he defies expectations and dominates the 2017-18 season as he did in junior. Without a major progression like this, the odds get awfully long.

That’s not to say he won’t get there. Anthony Mantha had a disappointing first year in the AHL, but rebounded and is now putting up good numbers in Detroit. Dustin Brown (who plays a similar game) had a rough first year in Los Angeles, but a season with the Manchester Monarchs coalesced his scoring and confidence. Raffi Torres was picked fifth and had a rocky start to his career, but rounded into a solid middle-six NHLer.

If Virtanen can play smart and focus on his strengths—his skating speed, physical game, and shot—there’s an NHL career to be carved out.

Management shouldn’t bother trading him, his value is at an all-time low. But they also shouldn’t rush him back into the NHL next year either.

Unless he takes a quantum leap over the summer, Virtanen belongs in Utica for another year. This fish ain’t cooked.