The Toronto Raptors’ incredible playoff run has captured viewers across Canada.
May 30, 2019 9:25 AM By: Daniel Wagner 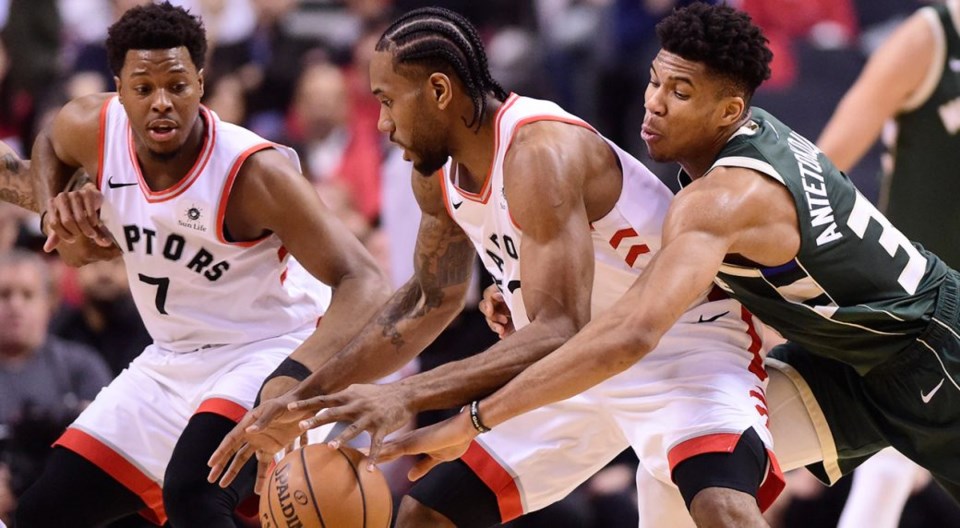 The Stanley Cup Final matchup between the Boston Bruins and St. Louis Blues is drawing in viewers in the United States, with around 5.15 million viewers taking in Game 1. In Canada, however, more and more sports fans are tuning out on the NHL and tuning into the NBA.

With their extraordinary playoff run, the Toronto Raptors keep breaking ratings records in Canada. 3.8 million people were tuned in when Kawhi Leonard hit his incredible, seemingly physics-defying buzzer beater in Game 7 against the Philadelphia 76ers in the Eastern Conference semifinal, making it the most watched NBA game of all time in Canada. An average of 2.2 million people watched the entire game.

The Raptors broke that record not long after. Their series-clinching Game 6 victory over the Milwaukee Bucks in the Eastern Conference Final drew an average viewership of 3.1 million, with a peak of 5.3 million viewers in the final minute of the closely-contested 100-94 game.

Those are the two highest-rated NBA games in Canadian history and it’s easy to imagine the upcoming Finals between the Raptors and the dynastic Golden State Warriors eclipsing those numbers yet again.

Meanwhile, the Stanley Cup playoffs ratings in Canada have lagged behind the Raptors in the later rounds of the playoffs, which is unprecedented. More Canadians are watching basketball in May than hockey.

Really, we shouldn’t be surprised.

It certainly doesn’t help that all of the Canadian teams were knocked out of the Stanley Cup Playoffs in the first round. That immediately took a large chunk of the viewing audience out of the picture, with the ratings hitting their nadir in the second-round series between the Dallas Stars and St. Louis Blues. An afternoon game in that series had an estimated audience of 331,000 in Canada.

Last year’s Stanley Cup Final drew an average of 2.7 million viewers in Canada, and that series had the compelling storyline of Alex Ovechkin competing to win his first Cup and the underdog tale of the expansion Vegas Golden Knights making the Final in their very first season. This year’s Final lacks those storylines and star power and will struggle to reach those same numbers.

The Boston Bruins are an Original Six team, which usually has some cachet, but they could be the most disliked team in Canada. Besides, Boston teams have won quite enough championships in recent years. No one wants to tune in to watch them win one more.

The St. Louis Blues are a talented team, but they were also the least-compelling team in the playoffs. They play a boring style of hockey and the only interesting narrative surrounding their team is that they were in last place in the NHL earlier in the season. Oh, and they have a team dog named Barclay. He’s fun; the Blues are not.

What other storyline is there? It’s a rematch of the 1970 Stanley Cup Final, which featured the most overrated goal in NHL history: Bobby Orr’s “flying” goal. It’s hard to get excited about a rematch of a series from 49 years ago.

The Raptors, in comparison, are extremely compelling. They’re in the NBA Finals for the first time in their history. They have the incredible Kawhi Leonard making a bid for being named the best all-around player in basketball, who has delivered a series of iconic moments. They’re an underdog against the Warriors, who are looking to three-peat as champions, but that just makes them all the more compelling.

Some sports fans, particularly in BC, resent the Raptors because they’ve been “shoved down our throats” by the media, but when it comes to the NBA, on which teams should Canadian media be focussed? Where else should the coverage begin except for the only team that actually plays in Canada? Now a Canadian team is poised to win the NBA championship for the first time ever. How can you not tune in to see that?

6.8 - The Raptors hit a peak of 5.3 million viewers for their Game 6 win over the Bucks, but according to Sportsnet, 6.8 million Canadians watched at least part of the game. That doesn’t include viewers that may have streamed the game online.

5,700 - Wyatt Arndt has started a GoFundMe to dedicate a bench to the memory of Jason Botchford. In less than 24 hours, the fundraiser reached its goal of $5,700, with additional funds going to the Botchford family GoFundMe.

A tap of the stick to Richmond’s own Troy Stecher, who brought home a silver medal from Slovakia. He had three points in nine games with Team Canada, who fell to Finland in the gold medal game.

I’m dropping the gloves with the Aquilinis. Temporary foreign workers involved in an unpaid wages case against an Aquilini-owned blueberry farm have reported that they were harassed, intimidated, and threatened with deportation.