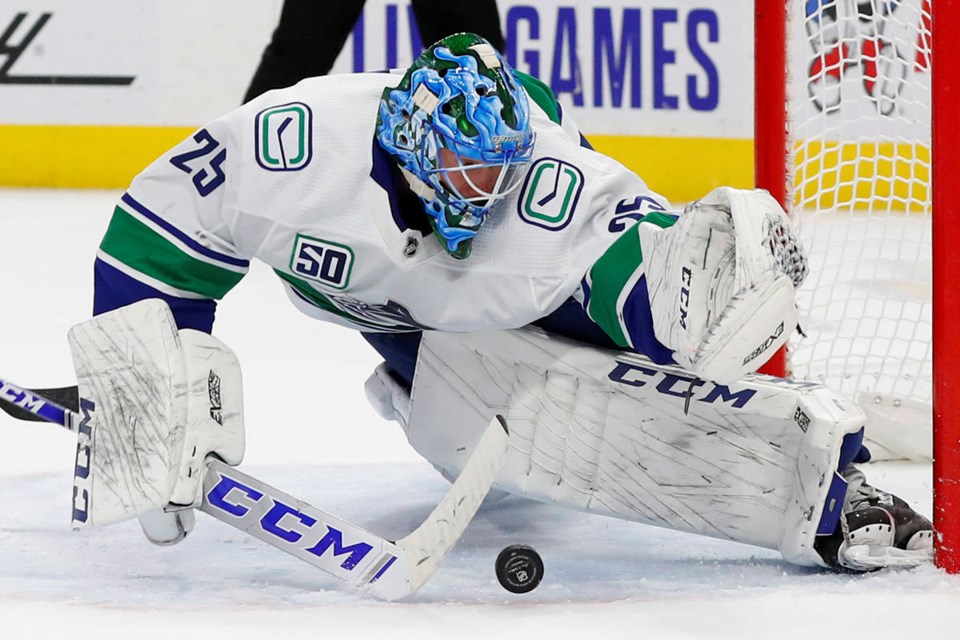 A lot has to go right for the Canucks to make the 2020 playoffs. Elias Pettersson has to be even better in his sophomore season than he was as a rookie. The team’s overhauled defence has to quickly gel together in their all-new pairings. High-priced trade acquisition J.T. Miller has to perform in a top-six role.

Early in the season, most of those things have gone right. Pettersson has struggled to get his goalscoring going, but is still a better-than point-per-game player, the defence looks much-improved from last season, and Miller has quickly exceeded expectations, tied for the team lead in points.

As of result, the Canucks have won six of their last seven games and are sitting fourth in the Western Conference, with a plus-11 goal differential that ranks third in the NHL. They wouldn’t be anywhere near that spot in the standings, however, without the goaltending of Jacob Markstrom and Thatcher Demko.

The combined save percentages of the Canucks’ two goaltenders is .933, good for third in the NHL, behind only the goaltending of the Arizona Coyotes and Boston Bruins. Markstrom got things off to a strong start as the team’s number one before taking a personal leave for a week, while Demko was even better in his absence, posting a .943 save percentage in three starts.

The Canucks have needed that goaltending in several games, notably their shootout wins over the Philadelphia Flyers and defending Stanley Cup Champion St. Louis Blues. Against the Blues, Demko had to be perfect in the shootout, stopping all five shooters he faced after making 34 saves in regulation and overtime.

Both Markstrom and Demko have been exceptional, keeping the Canucks in every single game. They’ve been particularly good on the penalty kill, which has only allowed four goals in 34 opportunities. The Canucks have an 88.2% penalty kill percentage, fourth in the NHL.

Part of that could be attributed to the skaters on the penalty kill, but the Canucks have actually allowed a higher than average number of shots and chances while shorthanded, including the seventh highest rate of high-danger chances, according to analytics site Natural Stat Trick. The biggest reason the penalty kill has been successful has been the goaltending.

At 5-on-4, the most common penalty kill state, the Canucks have gotten a combined .960 save percentage so far this season, which is otherworldly. Markstrom has a .974 save percentage in that situation, while Demko is at a still respectable .909. Add in 5-on-3 situations and Demko jumps up to a .941 save percentage.

The downside is that’s unlikely to continue: it’s just not possible for a goaltender to maintain a save percentage that high on the penalty kill over a full season. The highest save percentage on a 5-on-4 penalty kill last season came from the Arizona Coyotes’ Darcy Kuemper at .914, so the Canucks will need to patch up their penalty kill to keep from crashing too hard when the inevitable regression comes.

We can look at another statistic to get a more holistic view of how good the goaltending has been for the Canucks. Goals Saved Above Average (GSAA) from analytics site Evolving-Hockey includes all situations — even-strength, penalty kill, and power play — and also includes a measure of the shot quality that goaltenders have faced. Essentially, it compares how a goaltender has performed compared to how a league-average goaltender would perform facing the same quality of shots.

Markstrom and Demko were ranked 8th and 9th among the 49 NHL goaltenders that had faced at least 100 shot attempts this season as of Tuesday, which is when I put together the chart below. Markstrom has since bumped up to 6th, while Demko is now at 10th.

The goaltenders on the chart are just the ones whose GSAA is above zero. Approximately half of NHL goaltenders have a GSAA below zero, which is typically how averages work: half above-average, half below-average. It’s not just that Markstrom and Demko are well above average, it’s that they both are: the exceptional performance of both goaltenders means there’s little-to-no dropoff from the starter to the backup. The Canucks can depend on both goaltenders to give them a chance to win.

I’m dropping the gloves with the Canucks for sitting Adam Gaudette in the press box. The young centre earned his spot on the roster with his preseason performance, but has only been in the lineup for three of the Canucks’ nine games. If he’s not going to play, he should be in the AHL playing big minutes. EDIT: Immediately after publication, the Canucks sent Gaudette down to Utica. So a tap of the stick to the Canucks for doing the right thing.

A tap of the stick to the Utica Comets. The Canucks’ AHL affiliate has rattled off five straight wins to start the season, outscoring their opponents 29-11. It helps to have bonafide NHLers like Sven Baertschi and Nikolay Goldobin on the roster, but prospects like Kole Lind and Zack MacEwen have played a big role in the hot start as well.

2.25 - Nikolay Goldobin currently leads the AHL in points per game at 2.25 after putting up 9 points in his first 4 games of the season. Teammates Sven Baertschi and Reid Boucher are close behind at 2.00 points per game.

13 - Canucks prospect Carson Focht is off to a blazing hot start to his WHL season, with 7 goals and 13 points in just 8 games. The centre was drafted in his second year of eligibility in the fifth round at the 2019 draft in Vancouver.