New Vancouver councillor argues rents for all 231 units should be at pension and welfare rates
Nov 8, 2018 12:23 PM By: Naoibh O'connor 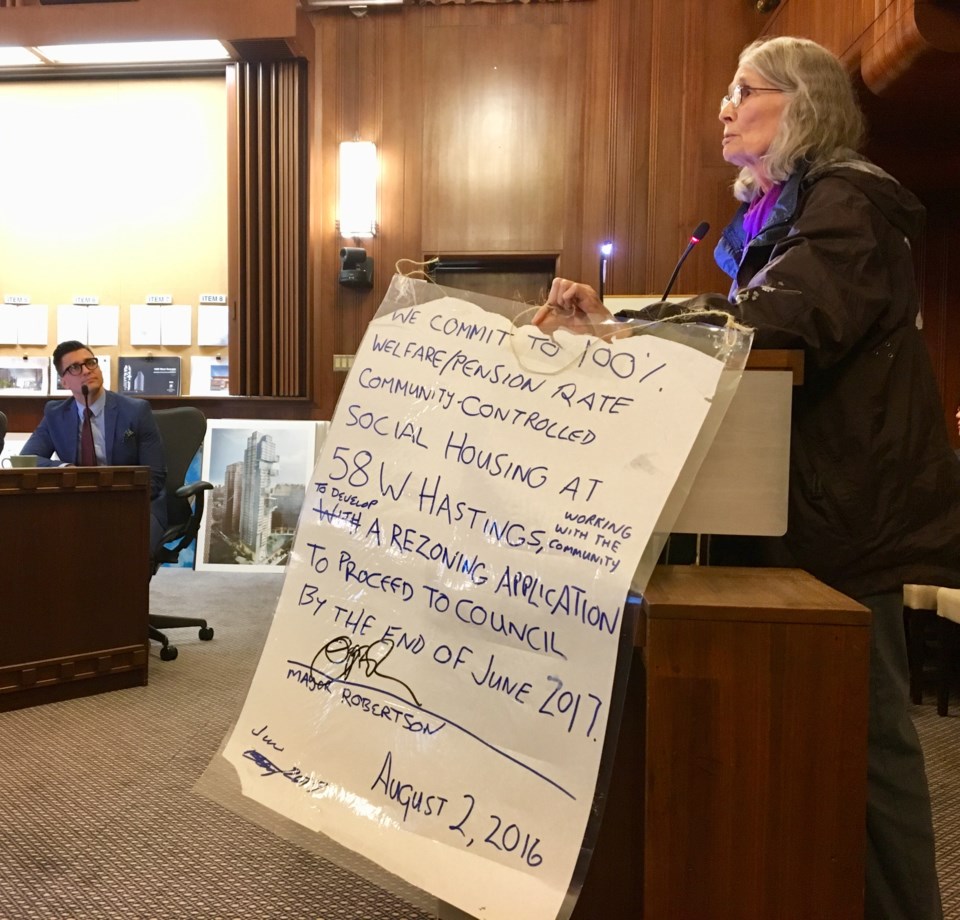 Jean Swanson, before she was a councillor, holds a poster-sized pledge that former Mayor Gregor Robertson signed on Aug. 2, 2016, to have the 231-unit building at 58 West Hastings rent at pension and welfare rates. She produced it at the public hearing where the project was approved. Photo Mike Howell

COPE Coun. Jean Swanson is taking a years-long effort aimed at ensuring that housing built at 58 West Hastings rents entirely at pension and welfare rates to next week's council meeting.

Swanson has a motion on notice for the Nov. 13 meeting calling on the new council to “recommit” to those rates. She also wants council to direct staff to report back within a month on what funding is required to achieve the 100 per cent welfare/pension rate, with at least three options for sources of revenue.

Former Mayor Gregor Robertson signed a poster-sized pledge on Aug. 2, 2016, which Swanson laminated for posterity, to have the 231-unit building rent at pension and welfare rates.

Swanson, through her motion, also wants council to direct staff to consult with the Our Homes Can’t Wait coalition and the Vancouver Foundation in order to propose how Robertson’s commitment to “community controlled housing” in the building can be achieved.

She told the Courier that community controlled housing is important because a lot of people in the Downtown Eastside don’t like how the existing supportive housing model works.

Rezoning for 58 West Hastings was approved in January of 2018 and the project is now scheduled to go before the Development Permit Board at its Nov. 13 meeting, which starts just hours after the council meeting begins.

The City of Vancouver owns the property, the Vancouver Chinatown Foundation will be the leaseholder and Vancouver Coastal Health will be the healthcare provider for the project.

The plan for the site, which sits between Abbott and Carrall streets, is to construct a 10-storey building with seven floors of housing featuring 231 social housing units, as well as retail and health care office uses on floors one to three.

When rezoning was approved in early 2018, the previous council included a commitment that city staff and the Vancouver Chinatown Foundation would “continue to work to raise additional funds to deepen the affordability of this development with the goal of achieving 100 per cent shelter of pension rents.”

But Swanson wants something more concrete than a commitment to try and further “deepen affordability.” She wants certainty.

Last May, housing activists from Our Homes Can’t Wait coalition blocked entrances to city hall and disrupted work at another city building over concerns about rents at 58 West Hastings.