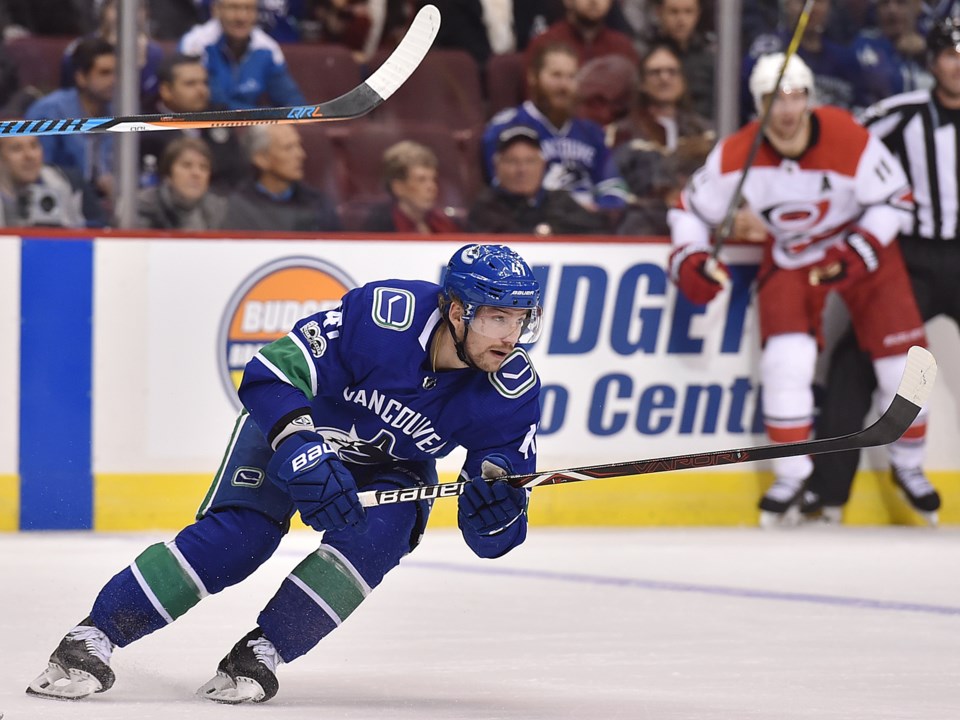 Sven Baertschi was one of Jim Benning’s biggest success stories. Of all the moves Benning made in his first year as general manager of the Canucks, the Baertschi trade paid off the most.

After struggling to stick in the NHL with the Calgary Flames, Baertschi found his stride in Vancouver, developing into a legitimate second-line winger and power play threat. For a team that has struggled to score over the last few seasons, Baertschi has consistently scored at a 20-goal, 40-point pace for the Canucks, with just one caveat: he hasn’t been able to stay healthy over the course of a full season.

Still, not many teams in the league can afford to throw away that type of production, let alone a team that was 25th in the NHL in goalscoring last season. That’s why it was so stunning to see the Canucks put Baertschi on waivers on Monday.

"It was hard," said Benning. "We traded for him, we developed him, we worked with him. He's been one of our skilled players the last four years around here and he had a good chemistry with Bo [Horvat] and they played well together."

Canucks head coach Travis Green made it clear that it wasn’t an easy decision to cut the Swiss winger, pointing out that he’s known Baertschi since he was 17 years old and playing under Green with the Portland Winterhawks in the WHL. He also suggested this wasn’t the end of Baertschi’s time with the Canucks.

“Baertsch is still part of the Canuck family,” said Green, “but he's gotta go through waivers and we'll see where he ends up.”

Green used Alex Biega last season as an example. Biega was put on waivers at the beginning of the season, but played just three games for the Utica Comets before getting called back up to the NHL, where he spent the rest of the season with the Canucks.

“The one thing I've learned about the NHL is it changes fast,” he said. “This team could look different next week.”

For now, however, Baertschi is not on the Canucks roster. He won’t be in the lineup on Wednesday in Edmonton for opening night, unless he gets claimed by the Oilers, who, incidentally, could use a top-six winger or four.

The reason why Baertschi won’t be in the lineup for the Canucks has less to do with Baertschi’s talent and ability to play in the NHL and a lot more with “fit,” according to Benning. The Canucks’ GM suggested that Baertschi getting waived was a natural consequence of the Canucks getting better and pushing to make the playoffs.

“It's the evolution of us as a team,” said Benning. “My job is to try to improve the team, sign better players, trade for better players over the summer, so we got better players in camp. So, we were going to have to make tough decisions.”

The additions of Micheal Ferland and J.T. Miller certainly improved the Canucks’ top six. In theory, this would push other wingers down the lineup, improving not just the top two lines, but the team as a whole. Instead, it pushed Baertschi right off the roster.

You could argue that the Canucks haven’t evolved enough: the team is still clinging to a lower stage of evolution with a top-six/bottom-six dichotomy that doesn’t allow room for a skilled player if they’re not on the first two lines. For all the talk of three scoring lines or top-nine forwards, the Canucks are constructed similarly to last season: two scoring lines, a checking line, and a grinding fourth line.

Asked outright if the Canucks had enough skill among their forwards, Benning was quick to say yes, but do they have enough depth to dig their way out of 25th in the league in scoring?

“I think we've seen some good chemistry on on some of the lines,” said Benning. “I think if Josh Leivo's on that third line with [Brandon Sutter] and with Jake [Virtanen]...or Loui [Eriksson]'s on that line, Jake gives that line speed, Leivo, we're hoping he’s going to be a 15-20 goalscorer for us this year, and Sutts has scored in the past.”

Green echoed those thoughts, suggesting that trio is capable of providing the depth scoring the Canucks have frequently lacked. Some might question who will distribute the puck on that line, as one missing ingredient from that line is playmaking. Benning also suggested that the Canucks could get more offence from an unlikely source.

"That fourth line, they played through the pre season, had good chemistry together, the [Tim] Schaller, [Jay] Beagle, [Tyler] Motte line,” said Benning, “and they've spent a lot of time in the other team's offensive zone with a good forecheck and cycling the puck. We're hoping that leads to scoring chances and they can score their share of goals too.”

That might seem overly optimistic. That trio combined for 15 goals last season, most of them from Motte. Even with a bounceback performance from Schaller, who struggled in his new environs in Vancouver last season, is unlikely to provide much in the way of depth scoring from the fourth line, which was badly outscored last season.

Special teams also played a big role in waiving Baertschi. The team has placed a priority on using their depth players to kill penalties, itself a notion that is becoming outdated around the league, and somehow couldn’t find a spot for Baertschi, one of the team’s most efficient power play point producers, on either of the Canucks’ two power play units.

“It's about trying to figure out the best fit with the group of different types of players,” said Benning. “Sven's a skilled player and we just felt like the skill set on our team is addressed with some other players and, Travis wants a different look, maybe faster players or players that forecheck harder or penalty killers versus keeping Sven.”

“If Sven wasn't going to be on our top two units, power play wise, he doesn't kill penalties for us,” he said. “Those other guys give us more flexibility to be third or fourth line players and penalty killers. So I think that was kind of the conversation that we had, based on Sven versus Loui or Tim Schaller.”

That raises the question of why Baertschi wasn’t on either of the two power play units. Based on practice units, Tanner Pearson and Josh Leivo will join Bo Horvat and two defencemen on the second power play unit, but neither Pearson nor Leivo are anywhere near proven on the power play.

Baertschi has scored goals at twice the rate of Pearson and Leivo on the power play over the last three seasons and averaged significantly more points per hour than either of them as well.

Overall, putting Baertschi on waivers would be a lot easier to swallow if the Canucks hadn’t struggled to score goals so much over the last few seasons. Potentially losing a player that can put up points and provide playmaking to a lineup that sometimes lacks that quality is tough to take.

“It's no secret we haven't been a great team for the last few years,” said Green. “When I came in here two years ago, we talked about making improvements, and the way you make improvements is you get younger players in that help your team, you sign different players or other guys get better on your team that are here already. I think we've had a combination of all three things happening probably every year that I've been here, and we want to slowly keep getting better.

“That's the expectation and along the way...you're gonna lose bodies.”

It just seems odd that none of the bodies the Canucks are losing come from the bottom of the lineup.