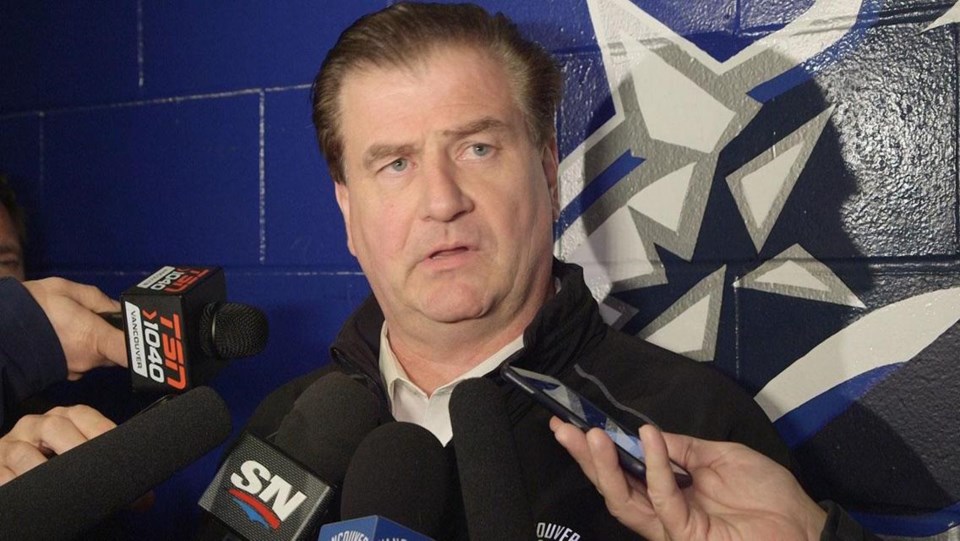 The 2018 NHL trade deadline is just one week away. It’s Jim Benning’s first big test since signing his contract extension with the Canucks and fans are waiting to see what lessons he’s learned over the past three-and-a-half years.

On Saturday night, Jim Benning appeared on Hockey Night In Canada during the first intermission to discuss his contract extension and the state of the Canucks heading into the trade deadline. After some technical difficulties, Benning answered some questions from David Amber, Nick Kypreos, Kelly Hrudey, and Elliotte Friedman.

It could have been an innocuous TV appearance and it starts off that way, as Benning talks about how excited he is to be able to see the prospects he drafted graduate to the NHL in the coming years. But like Everlast, he came to drop bombs.

“If we’re looking for a need here at the trade deadline,” Benning said, “we’d like to add a big player, maybe a forward with some physicality that has the skill to make plays.”

That doesn’t sound like the general manager of a team that is committed to selling at the trade deadline. The Canucks, who are twice as close to last place in the NHL as they are to the playoffs, need to be sellers, adding prospects and picks to build for the future. Any talk of adding a player raises some serious red flags.

I didn’t want to make too much of this comment at the time, both because I’ve been criticized for parsing Benning’s words too closely and because it came in response to a specific question from Hrudey: “In what area do you think you can improve your team the quickest?”

Perhaps it was just an answer to that question. Adding a physical forward is pretty quick and easy. They just added Darren Archibald, for instance, on a league-minimum contract without using any assets like draft picks or prospects. Surely he didn’t mean that the Canucks would actually look to trade for a player at a trade deadline where they couldn’t more clearly be sellers.

But then Benning talked to Ben Kuzma on Sunday and, to a certain extent, doubled down on his comments.

“I should have clarified myself,” said Benning. “We want to do hockey trades. We have some UFAs to see if there’s interest in them and the point I was trying to make is there a hockey trade to be made for somebody with size and strength, who can play in our top nine?”

“I don’t know if Pettersson can come in and make our team and we’ve got Gaudette, Dahlen and Lind, so we have skill coming. If I can find a player to kind of supplement that, then I’ll look to do something like that.”

That mitigates things a little, as he’s suggesting a player-for-player deal that could potentially mean bringing in a younger, NHL-ready prospect, rather than moving a draft pick or prospect to make a “buyer” type of move. He kept going, however.

“With the conversations I’m having, teams want to do hockey trades to just change the look,” he said. “There might be [getting] a young player who plays a certain style of game or moving a skilled player for one who might be harder to play against. Those are the deals I’m interested in.”

It should be eminently clear that the Canucks don’t have enough skill. While the team may have the occasional outburst of scoring such as we saw against the Boston Bruins or Dallas Stars, but the Canucks have still been the lowest-scoring team in the NHL over the last three seasons. One thing they absolutely do not have enough of is skill and certainly not a surplus from which they can make trades.

Even considering the prospects who could graduate to the NHL in the coming years, the Canucks still don’t have enough skill. Elias Pettersson, Adam Gaudette, Jonathan Dahlen, and Kole Lind are all great prospects, but they’re not guaranteed to make it. For Benning to list them and say, “we have skill coming,” then turn around and say he might move a skilled player in a trade is very concerning.

Consider this: the Canucks have blamed injuries and a lack of depth for their inability to make the playoffs over the past three seasons. Skilled depth is a must in the NHL if you’re going to be a playoff contender, as no team can rely on staying healthy all season. Trading skilled players guts your depth.

The best way to build depth is through the draft, and you do that by acquiring as many draft picks as you can when you find yourself a seller at the trade deadline. That Benning and the Canucks don’t seem to think acquiring draft picks is a priority should make Canucks fans very nervous.