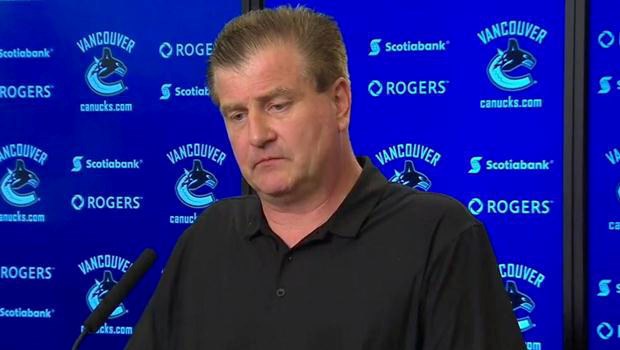 Not long ago, the Canucks went on a bit of a tear, picking up points in 12 of 14 games with a 9-2-3 record. That run brought the team to the lofty heights of the second wildcard spot, which they clung onto by the tips of their fingers like a rock climber with no rope. (Sidenote: The picture in that link makes my hands sweat involuntarily.)

Unfortunately, the Canucks weren’t able to cling to the edge and and have started plummeting down the standings like Lady Gaga from the top of NRG Stadium: slowly and safely.

The Canucks are now 5 points out of the last wild card spot and, with a tough schedule ahead of them, will find it tough to make up ground. Unless Ryan Miller plays out of his mind, the Canucks’ dreams of making the playoffs could be over in a hurry.

March 1st is just three weeks away and as the Canucks fall further and further out of the playoff picture, there’s less and less chance that Jim Benning will gamble the future on making the postseason. But will they make any trades at all or will this just be a repeat of last year, when Benning failed to make the most of pending free agents Radim Vrbata and Dan Hamhuis?

The Canucks have a few players that could fetch value in a trade. Alex Burrows and Jannik Hansen top that list, but they’re not alone: Ryan Miller is a pending UFA and the Canucks have defencemen that could be moved as well, from Luca Sbisa and Erik Gudbranson to Chris Tanev and Alex Edler.

The biggest problem is that Burrows, Hansen, Miller, and Edler all have no-trade clauses in their contracts. For Hansen and Miller, they’re modified clauses that allow them to list teams they would be willing to go to. Earlier this season, Jim Benning made it clear that he wouldn’t ask veteran players to waive those NTCs, a switch from his stance when he first came in as General Manager.

“There are a couple reasons why I wanted to put that out there about not trading the guys with no trade contracts,” he said on TSN 1040. “The first reason, I think, is I wanted to be honest with our players and our fans...the other reason is I want to try to eliminate the unnecessary distractions so our players can focus on getting better and winning games.”

Whether you agree with this call or not, at least it was clear. It left an opening for players without no-trade clauses to be moved, like Tanev, Sbisa, or Gudbranson, but at least guys like Burrows and Hansen could play out the season without worry.

Here’s what Benning had to say this week on the subject of asking Burrows and Hansen to waive their no-trade clauses or, in Hansen’s case, of providing a list of teams.

“We’re going to see where we’re at,” said Canucks general manager Jim Benning, who’s on a European scouting trip. “I’ll have individual conversations with those players and their agents, but we’re hoping we can stay in the (playoff) fight. But it’s a tough trip.”

Benning went from clear and distinct — he won’t trade players with NTCs — to more waffley than Eleven’s diet. Instead of a blanket statement that covers everyone with a NTC, it’s now about “individual conversations.” And so much for being honest with our players and eliminating distractions.

So, will Benning aim to add more draft picks and prospects by doing what he said he definitely wouldn’t do? Honestly, going back on his word is probably the best move for the franchise as a whole. I love Burrows and Hansen, but if you can get a high draft pick and/or a great prospect back in a trade, you have to do what’s best for the future.

Still, it adds a dose of uncertainty to the next few weeks for several Canucks.