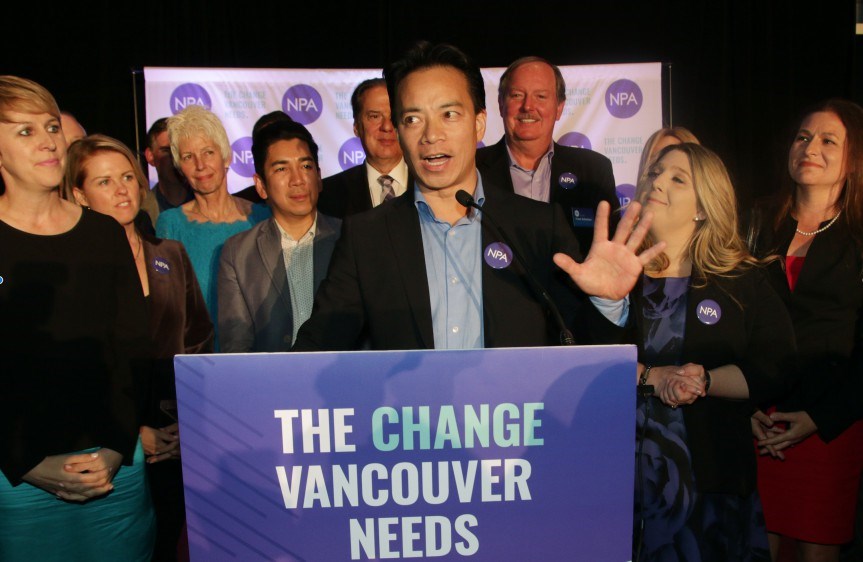 Ken Sim thanks supporters at the end of a very long election night. Photo Rob Kruyt

A seemingly fractured left that busied itself with infighting for much of October was not enough for political rookie and NPA upstart Ken Sim to sift through and pick from the leftovers.

But my oh my was it close.

Sim finished 984 votes behind mayor-elect Kennedy Stewart in an absolute nail biter that saw momentum swing for the better part of three hours.

Independent Shauna Sylvester was a non-factor for most of the evening, finishing a distant third with 35,537.

Sim didn’t ask for a recount, but he also kind of did.

“There are still ballots to be counted,” Sim said.

The neck-and-neck dual between Sim and Stewart had the makings of a 12-round prize fight early on, with each gaining traction through the 10 o’clock hour. It was shortly after 10 that Sim took a minute lead in the polls, to the cheers of at least 200 supporters gathered in Coal Harbour.

Stewart then opened a 1,000-vote lead, then 2,000 before 11. The mood in the hotel subdued significantly by 10:45, with large pockets of supporters leaving altogether.

Late polls pulled Sim back within 300 votes shortly after 11 and the room was absolutely re-energized.

A paltry 750 votes separated Sim from Stewart until the final numbers came in at 12:40 a.m.

The NPA did, however, elect five councillors, representing the party’s best standing since 2005 when Sam Sullivan took the mayor’s chair alongside five centre-right colleagues.

“People are used to hearing housing affordability is the number one issue and I try to point out that it’s not just housing affordability, it’s affordability period” Hardwick said. “Whether it’s parking meters, dog licenses, or property taxes, people are straining to be able to afford to live in this city. The key point that was put out by Ken Sim and which I echo is the need for a forensic audit and core review of the city’s finances to get us better in balance.”

“People had a wide range of issues, but at the end of the day I think they’re looking for something new at city hall,” Bligh said. “For the most part, they could see that the NPA is that opportunity.”

Like Sim, Kirby-Yung was up and down all night long, duelling for the final spot with the Green Party’s David HT Wong and fellow NPAer David Grewal. Kirby-Yung ultimately opened up a 2,000-vote lead over Grewal towards the evening’s end to hold on.

“We heard that people are ready for change,” Kirby-Yung said. “We got a lot of positive feedback on the doorsteps that people would be voting for the NPA as a team, which was great to hear.”

Eight of the 11 people around the council table are women, with no representation from visible minorities.

Until Saturday night, Vancouver voters slowly moved away from the centre-right NPA since the turn the turn of the century. The last two elections of the 1990s (1999 and 1996) were veritable clean sweeps for the NPA.

By 2002, only two NPA councillors won the confidence of voters as the city’s electorate swung decidedly left. Five NPA councillors were elected in 2005, alongside former mayor Sam Sullivan.

It’s been downhill since. Suzanne Anton was the lone NPA presence on council from 2008 to 2011. George Affleck, Melissa De Genova and Elizabeth Ball have been the NPA flag bearers on council since.

Stewart is now tasked with chairing a hodge-podge of political backgrounds around the council table, as no clear party majority was able to break through. The NPA’s five councillors represents the highest number, though the centre-left holds the remaining six votes.

Sim’s platform was largely framed around housing and fast-tracking permits at city hall. He wants more affordable housing on city-owned land and homeowners to have two basements suites, not just one. Claiming he’d be the “the most business friendly mayor in the history of Vancouver,” Sim pushed for city-wide planning instead of spot rezonings and individual community plans.

Sim seemed to radiate a genuine “Golly gee, shucks” type of response back in June when he won the mayoral bid and flew under the radar in the weeks leading up to election night. Sim didn’t entangle himself in partisan Twitter battles, and he rarely took aim at any other candidates, parties or platforms.

Where Sylvester and Stewart ratcheted up the rhetoric in the last month, Sim stayed tight lipped.

What Sim lacked in political experience, he made up for in considerable business acumen. He’s a chartered accountant, Sauder School graduate and founder of two businesses: Nurse Next Door, which has franchises across Canada, and Rosemary Rocksalt Bagels.

The NPA released its list of campaign donors in early October, raising about $840,000 from 4,400 donors.

In all, more than 360 of those donations totalled the maximum allowable contribution of $1,200, although some contributors also gave $1,200 to the separate school board campaign, which is allowed under new campaign finance rules.

Robert Macdonald of Macdonald Development Corporation, Ian Gillespie of Westbank Corp., Future Shop founder Hassan Khosrowshahi and several members of the Gaglardi family all donated a maximum of $1,200 each to the NPA’s campaign; Tom Gaglardi owns the NHL's Dallas Stars.

It’s safe to assume that number had shot past the $1 million threshold by election night, as the NPA’s war chest was also supported by the likes of Lululemon founder Chip Wilson and Peter Armstrong, owner of the luxury train business Rocky Mountaineer.