Boeser’s agent didn’t just secure a three-year deal, but a guaranteed raise for his next contract.
Sep 19, 2019 9:50 AM By: Daniel Wagner 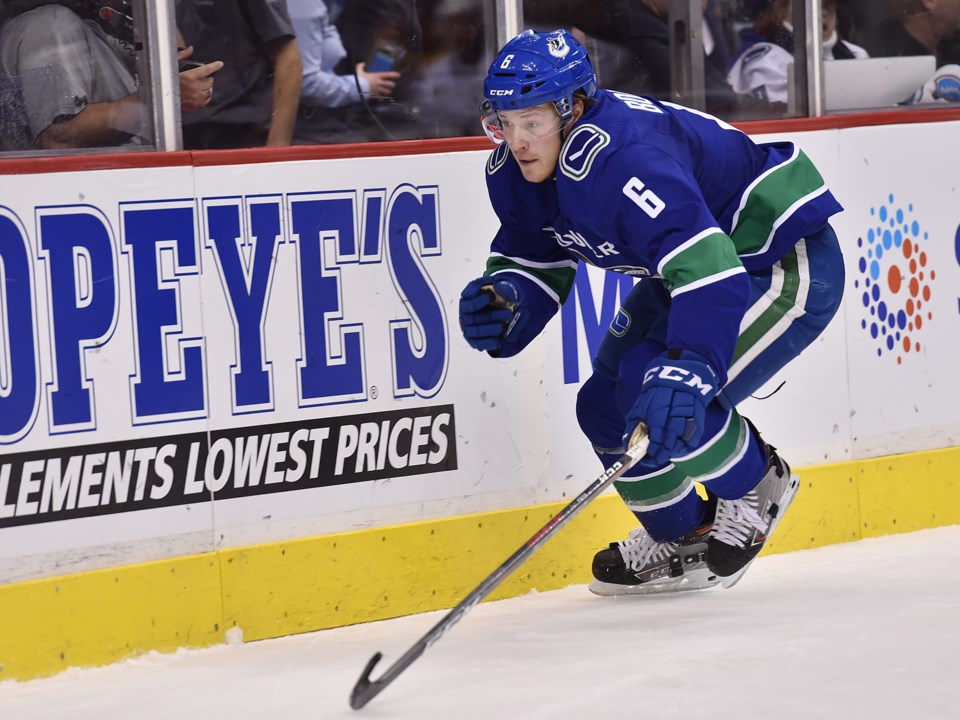 For most of the summer, the Canucks and Brock Boeser weren’t even close to a new contract. Even one week ago, there was a question of whether a deal would get done, as talks between Canucks general manager Jim Benning and Boeser’s agent, Ben Hankinson had reached a stalemate.

“After I talked to [Benning] on Monday night, we didn’t talk for another week almost,” said Hankinson on an appearance on TSN 1040. “I wouldn’t have done this deal a week ago, and neither would he.”

Fortunately for Canucks fans, the two sides hammered out a deal just before the start of the preseason. Boeser re-signed on a three-year contract with an average annual value of $5.875 million per year, a bridge contract that will see Boeser remain a restricted free agent when it expires.

It’s a contract that seems to be right at market value for the sniper. Contract projections from hockey analytics site Evolving Hockey, which use past contracts around the NHL to predicted future deals, predicted a $5.78 million cap hit if Boeser signed a three-year deal.

That raises the question: why did this deal take so long to get signed? And why were the two sides so far apart? At one point, Hankinson described their talks as “heated” and said they were “swearing at each other.” Perhaps that isn’t surprising given the importance of this contract, but it still seems odd that the two sides couldn’t get closer over the summer.

Contract negotiations have a lot of moving parts beyond the obvious — money and term — but those are the starting point. According to Hankinson, both Boeser and the Canucks wanted a long-term deal at the start of negotiations.

“There’s no question Brock, originally, we were talking long term and I think the Canucks wanted to sign him long term too,” he said, “but our expectations weren’t the same on a long-term deal.”

That indicates there was a clear disconnect on the other half of the obvious: money. If the two sides couldn’t get close on the money side of things, there was no point in even trying to sort out the other details. Eventually, talks had to switch from a long-term deal to a short-term deal, particularly after the Canucks were active in acquiring other players via trades and free agency, Roberto Luongo retired, hitting the Canucks with a cap-recapture penalty, and the salary cap didn’t go up as high as expected for the coming season. Perhaps it was less that the Canucks weren’t willing to meet the demands on a long-term contract, but that doing so would have required making too many other moves to clear the cap space.

“Jim and I kinda focussed in on three years, the last few weeks or a month. We were still pretty far apart,” said Hankinson. “We both were hitting our heads against each other, saying this is a fair deal, we think we’re being fair, and we never got there.”

So, how did the two sides finally come together? One of the keys is in the structure of the deal, one of those moving parts beyond the obvious. While the average annual value, and cap hit, of Boeser’s deal is $5.875 million, that’s not what he’s getting paid each year.


That’s important, because the base salary of the final year of a contract directly affects the qualifying offer that a team has to give an RFA. If the Canucks don’t re-sign Boeser before his contract expires, they’ll have to sign him to a Qualifying Offer worth $7.5 million.

That means Boeser didn’t just sign a solid three-year contract, but ensured a hefty raise at the end of that contract, even if he doesn’t perform up to expectations. Of course, Boeser has the drive and talent to exceed expectations and eventually cash in on a long-term deal, possibly worth more than $7.5 million per year, but the structure of his three-year contract provides a nice bit of security: his next contract, even if it's just for one year, will be worth at least $7.5 million per year.

1.39 - Over the last three seasons, Brock Boeser has averaged 1.39 goals per hour, which is 17th among NHL forwards in that time.

9.71 - One key to bumping Boeser up the ranks in goal-scoring will be getting more shots. Boeser has averaged 9.71 shots per hour over the last three seasons, 38th among NHL forwards. With his elite shot, getting the puck on his stick for more shots should be a priority.

A tap of the stick to Jake Virtanen, who responded to questions about his conditioning at the start of training camp with a two-goal effort in the first game of the pre-season. Playing with a chip on his shoulder seems to work for Virtanen.

Elias Pettersson gets a stick-tap for one of the best lines of training camp. Regarding Boeser’s contract negotiations, he said, “He’ll sort it out, otherwise I’ll drive to Minnesota to pick him up myself.” Fortunately, he didn't have to, because it's a 27-hour drive to Minnesota.