While the old lumber mills formerly located at the south end of Boundary Road are long gone, signs of the still thriving industry are everywhere along that stretch of the Fraser River.
Mar 29, 2013 12:24 PM By: Sandra Thomas 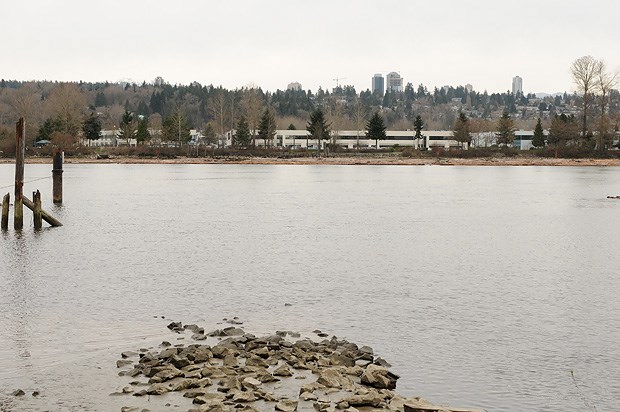 The site of the former Dominion Mill as seen from the Richmond side of the Fraser River. Photograph by: Dan Toulgoet

While the old lumber mills formerly located at the south end of Boundary Road are long gone, signs of the still thriving industry are everywhere along that stretch of the Fraser River.


On any given day, small boats can be seen maneuvering huge log booms into place along the shores of the Fraser. And less often, men hoisting long gaffs can also be seen wrangling logs into position as they balance on a boom moving with the waves.


Killarney resident Manfred Hagen spent 25 years working at the old Macmillan Bloedel mill during its prime. He describes his work as a gang saw and planer operator as tough but rewarding.


Seattle industrialist Julius Bloedel built the original Dominion Mill, which opened at the south end of Boundary Road in 1910. That was more than 100 years after Scottish explorer Simon Fraser first travelled the river in 1808. The mill was the first in Canada to produce pressure-treated wood for use as railway ties. In 1935, lumber baron H.R. MacMillan purchased the Dominion for $75,000 and expanded with the Canadian White Pine Mill next door. Those mills eventually employed thousands of workers. The Canadian White Pine Mill burned to the ground two years later and was rebuilt in 1939. By that time, the Dominion Mill had been processing more than 200,000 feet (almost 38 miles) of timber each day. In 1944, a third mill, simply called “C Mill” was built.


Two years after that the International Woodworkers Association organized the workers and established a 40-hour work week after a strike that also brought a 15-cent wage raise.


When Hagen started at the mill in 1973, his pay was $4.50 an hour. By the time he left in 1998, he was making $22.44 per hour. Thanks to the IWA, Hagen made time-and-a-half ($33.66) for one hour each day during shift change when the 22 saws he operated and oversaw were changed for ones with sharper blades. By 1950, the Canadian White Pine Mill was so busy it introduced swing shifts and employees began working through the night. But then, in 1952, the old Dominion Mill closed. In 1982, Canadian White Pine Mill also closed, laying off 700 workers. When it reopened the next year, only 500 jobs remained.


It was in 1999 when the mill was taken over by Weyerhaeuser USA, which closed it for good the next year and sold the property for development, changing the face of the river forever.


Hagen calls the closure a sad moment in Vancouver’s history.


“Now the whole mill is gone,” said Hagen, who turns 80 in November. “Maybe I’m too sensitive because there’s nothing I can do. But like I said, I never had it so good.”