Yoga students stretched and contorted their bodies in indoor space with a view of the Fraser River in southeast Vancouver last week.
Mar 29, 2013 12:13 PM By: Naoibh O'connor 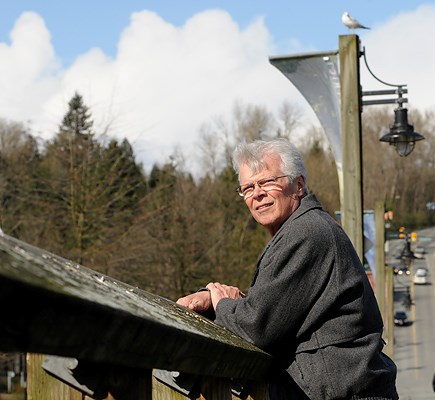 Co-chair of the East Fraserlands Committee Milt Bowling keeps an eye on the River District at Kerr and Kent Avenue. Photo: Dan Toulgoet.

Yoga students stretched and contorted their bodies in indoor space with a view of the Fraser River in southeast Vancouver last week. But the class wasn’t taking place in a yoga studio, it was at River District Centre steps away from an interactive scale model illustrating the vision for a swath of land once known as East Fraserlands but branded as “River District” in 2011.


The building serves as both a presentation centre for the sprawling development and a community centre of sorts, offering free or low-cost activities, such as Tuesday evening yoga, put on by community organizations.
If development plans unfold as expected over the next two decades, River District, encompassing 130 acres between Kerr Street and Boundary Road south of Marine Way, will teem with people and activity.


ParkLane Homes owns the majority of the land, which it bought from Weyerhauser in 2004, while the city approved the East Fraserlands Official Development Plan in December 2006.


While ParkLane Homes is the master land developer, responsible for infrastructure, public spaces and roadways, it’s also partnering with other builders for some of the residential developments.


“The first three sites were sold to Polygon,” explained Ben Taddei, chief operating officer for ParkLane Homes. “And we’re also going to be building on select parcels ourselves. Town centre will be the first one for us.”


On the west side of River District, Polygon has built townhouses and apartment complexes. Shoreline apartments are next on its agenda, which will go to market this spring with construction likely starting in the fall. But it will be years before the overall development is completed.


“The drivers are going to be things like the market, but we anticipate it’s more or less a 15- to 20-year project. It could be longer,” Taddei said.


The market already affected plans — phase one of the development was supposed to be the town centre, but the 2007 financial crisis put that on hold and development shifted to the residential parcels. Taddei said plans for the town centre, which will include a food store, a bank, likely a drug store, potentially a liquor store, and various other commercial and retail units, are moving forward. “We’ve started design work and we hope to be at market in the next 18 to 24 months,” he said.


Taddei noted a master plan was needed due to the size and scope of the project. “This part of Vancouver was envisioned as the new heart of the southeast corner of Vancouver and it’s really a destination community,” he said. “So the fact it’s a destination community that’s going to serve the region and the fact it’s 130 acres necessitated an official development plan — a master plan.”


Land is earmarked for schools and a community centre, but the city and park board and the school board and provincial government will determine when they’re built. Twenty per cent of residential units are required to be a variety of different types of affordable housing, according to Taddei, some on standalone sites and some integrated within buildings.


Milt Bowling is determined to see affordable housing built. Bowling is co-chair of the East Fraserlands committee, a group that’s monitored and provided input on the project on behalf of residents and neighbourhood groups for years.


“One of the areas that’s very important to us — crucial — is affordable housing,” he told the Courier. “We want to keep at it and ensure it does come to fruition as originally conceptualized by all of us. The only concern I have right now is the affordable housing. That needs to be done otherwise it’s a lot of wasted effort on a lot of people’s part. [But] we’ve got a good level of trust with the city, and with ParkLane, based on some serious head-butting over 10 years.”The East Fraserlands committee next meets with the city in mid-April about affordable housing.
Meanwhile, Bowling is pleased with the progress. “We wanted it to be a walkable, cyclable community, so everybody living there can age in place, can get to the grocery store and whatever else they need rather than going up that giant hill to get something — we want to keep them out of their cars,” he said.