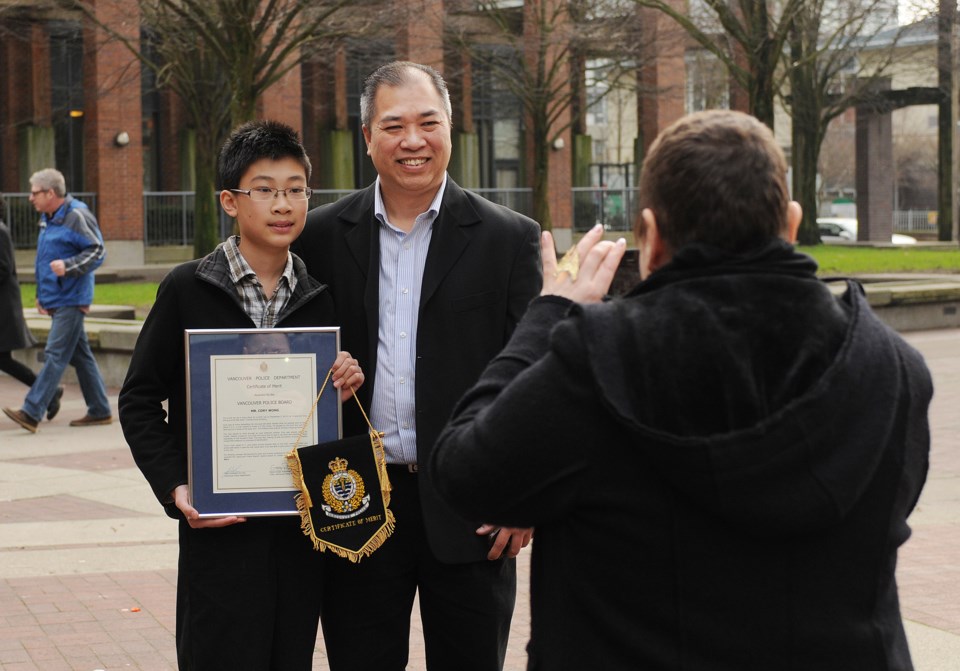 Cory Wong, 13, was all smiles Thursday as he received an award for fending off an intruder in the family home while babysitting his younger sister. His father, Chuck, attended the ceremony at the Roundhouse Community Centre with his son. Photo Dan Toulgoet

He’s a 13-year-old boy, who stands five-foot-two, weighs 80 pounds and is not afraid to use the family’s home phone as a weapon to whack a thief on the head enough times to force a retreat.

That’s what the Grade 8 Killarney secondary student did on the afternoon of Sept. 3, 2013 when a man got halfway into a second-floor window before Wong let him have it. He was home babysitting his nine-year-old sister at the time.

“I rushed to him and just smashed him in the head many times, like right near the eye,” said Wong, pointing to his temple.

Wong, who was 12 at the time, walloped the intruder with such force that batteries dropped from the phone and the man, believed to be in his early 20s, dropped to the ground and ran off.

Wong had phoned his mom before the man broke into the house. Once he fended him off, he and his sister armed themselves with sticks until police arrived. He gave them a description and police were able to obtain DNA evidence from the scene.  Police continue to search for the man.

The articulate youngster told his story to reporters Thursday after Police Chief Jim Chu presented Wong with a Certificate of Merit for his bravery. The award was one of many given to citizens and police officers at the Vancouver Police Department’s annual ceremony held at the Roundhouse Community Centre.

“I just felt like I was about to explode with happiness,” Wong said of being notified he would receive an award. “I didn’t know that what I did would get this award.”

Wong’s dad, Chuck, stood by as his son fielded questions from a throng of reporters. He described that day as being dramatic and scary for a parent. He said he was glad his son defended himself and protected his sister, who was screaming throughout the ordeal.

“I’m glad he did what he did and I would hope other people would do the same to protect their home and community,” said Chuck, who allowed his son to be absent from school to collect the award.

The master of ceremonies at the event joked that Wong might be a future recruit for the department. Asked by reporters if he was interested in joining the VPD, Wong replied, “I’d be OK with that.”

Brian Chernoff, 30, joined the VPD five years ago. He is a third generation member of the force, with his father and grandfather serving before him. Now a constable, Chernoff was recognized Thursday by the chief for his bravery on the early morning of March 5, 2013.

He and partner, Const. Graeme Wells, saved a distraught woman from death after cutting her down from a rope that she tried to hang herself with by the lighthouse at Brockton Point in Stanley Park.

Chernoff said the only information he and Wells had from a police dispatcher was that a young woman had called and said she was going to kill herself somewhere in a park and she could see a bridge.

The officers rolled up to Brockton Point around 3 a.m. and noticed a car parked obscurely by the lighthouse. As Chernoff checked the licence plate number, Wells left the cruiser to search the area and almost immediately found the woman. She was hanging from a rope that she tied to a railing.

“She wasn’t relieved to see us, she was more upset to see us,” he said, noting he cut the rope while Wells held up the woman to displace her weight. The trio then slid off the slope below the seawall and into the ocean. “Fortunately, at the bottom of the seawall, there was a bit of a step and we got her over to there.”

Wells established a rapport with the woman, who was in her early 20s, while waiting for help. The officers convinced her “that she needed to live,” not to struggle with them and to climb a fire department ladder to safety.

“She was a really nice girl but she had suffered some loss in her family,” Chernoff recalled. “It was one of those things where things were building up in her life and she just made her decision.”

While proud to be recognized for the work he and his partner did that early morning, Chernoff said officers at the VPD and other departments are performing similar acts, some of which gets highlighted while others don’t.

“But it’s always great at the end of the day when you can go home and feel proud of what you did,” he said, noting he and his partner were classmates during training. “Our sergeant trusted us enough to go out and work with each other and work hard, and that’s what we did.”

A full list of the awards can be viewed on the VPD’s website, including officers recognized for solving murders, saving lives and community work. The chief also recognized the Vancouver Police Pipe Band and citizens for helping others in distress.