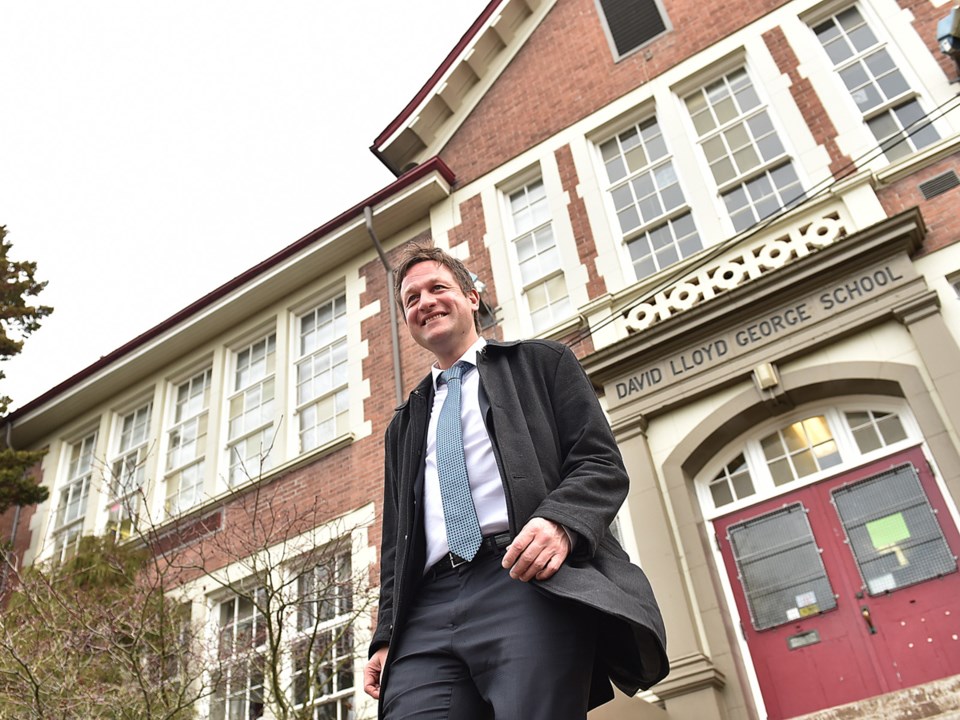 A Vancouver elementary school listed on Heritage Vancouver’s top-10 “watch list” could be facing demolition with the announcement Monday that it will be replaced with a $24.2-million new school and open by the 2021 school year.

Education Minister Rob Fleming made the funding announcement at David Lloyd George elementary, where he said it was up to the school board to decide on the future of the 1921-built school. It will stay open until the new school opens on the same property at 8370 Cartier St., near West 67th Avenue and Granville Street.

“Those decisions will be up to the city and school board, ultimately,” Fleming told the Courier. “What we provided today is funding for a brand new school on site.”

The Vancouver school board has yet to decide on the school’s future use, although trustee Janet Fraser said after the minister’s announcement that it could be used as a “swing space” if other schools in the area get upgrades and require a temporary building for students.

Bridget Ford, the head of the school’s parent advisory council, said the school’s heritage value has been discussed among parents, but student and staff safety has taken prominence. Ford, who has two children at the school, said she worries about their safety if an earthquake were to strike.

“We’re sad to see it go,” said Ford, anticipating the school will one day be demolished. “But the benefits of a new school far outweigh, we feel, the need to restructure this school. I have even looked at going to other schools because it’s seismically unsafe. My Grade 2 kid’s classroom is in the basement. I just cringe.”

Last June, Heritage Vancouver released its annual top-10 “most endangered heritage resources list” and ranked David Lloyd George elementary at number three. The school, which was rated as having a high seismic risk in 2014, is on the Vancouver Heritage Register but that does not provide protection from demolition.

The school was named after the British prime minister of the day.

“With professional advice from heritage consultation committee members, the [Vancouver school board] should explore all options rather than defaulting to demolition or, if that is not feasible, to retain the most significant features of heritage school buildings,” says a write-up on Heritage Vancouver’s website. “Unless the VSB seismic upgrade process is changed to include heritage value assessments for high-risk schools, they will remain threatened with demolition.”

Horgan’s government has promised to spend a half billion dollars over the next three years to seismically upgrade or replace some of the 181 schools in B.C. that are at risk of major damage or collapsing in an earthquake.