Libby Davies reflects on 40 years as a politician 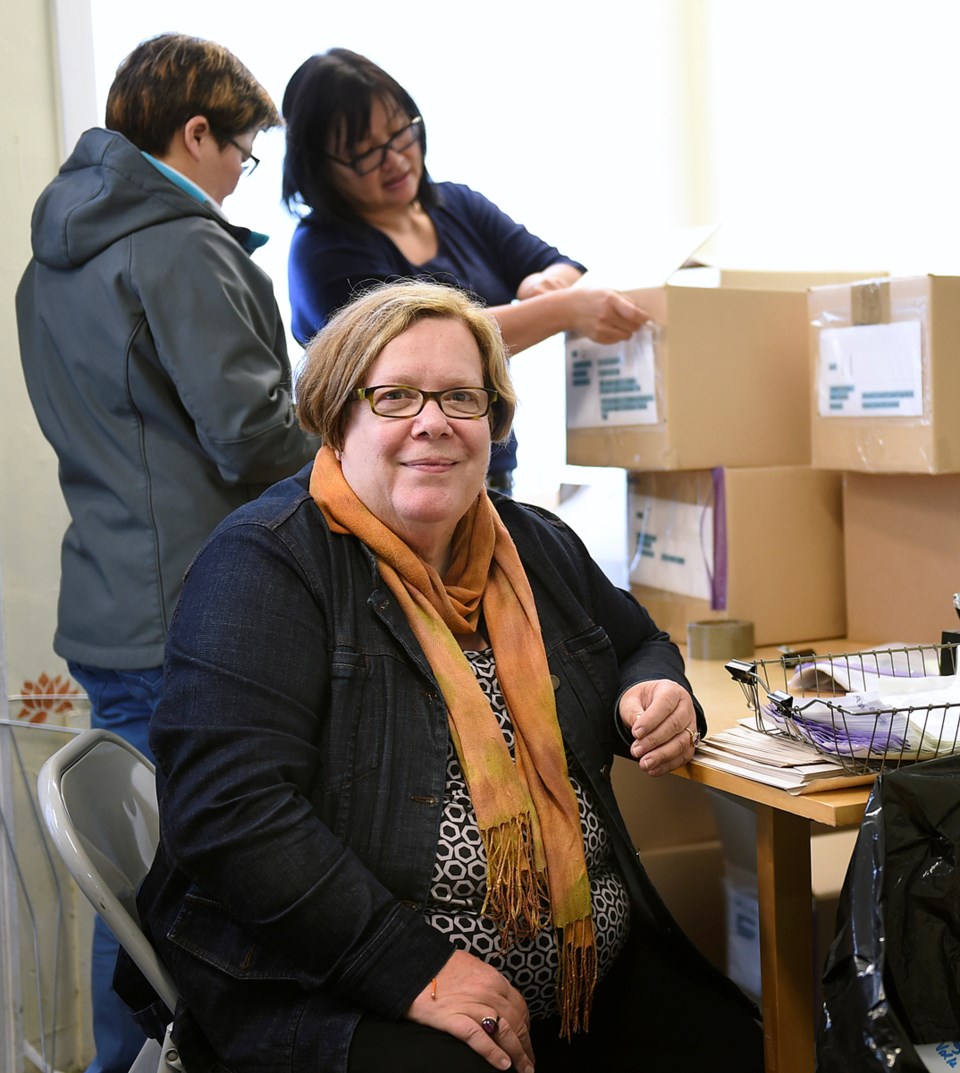 Vancouver-East NDP MP Libby Davies spent last Friday afternoon in her constituency office on Main Street, where she and her staff closed the doors for the last time. Davies is retiring from politics. Photo Dan Toulgoet

After almost 40 years of serving her constituents at two levels of government, Libby Davies packed up her offices last week on Main Street and in Ottawa. The longtime NDP MP for Vancouver-East, who also served as a park board commissioner and city councillor, decided last year that she would not seek re-election Oct. 19. The Courier caught up with her by telephone from Ottawa after she spent her last day as an MP on Parliament Hill.

How does it feel to be packing up your offices?
When I left Parliament Hill yesterday, of course it was very quiet and I just walked down the corridor by myself. I didn’t really dwell on it. It was like, “What have I got to do next?” And that’s sort of the person I am, always thinking about what I’ve got to do next. I’m sure it will hit me sometime later. But I’m ready to move on. I have no regrets about my decision, that’s for sure.

But I understand you’ve still been campaigning.
I’ve been through the B.C. Interior, I’ve been on Vancouver Island a couple of times and I’m actually going out with Constance Barnes [NDP candidate for Vancouver-Centre] tomorrow evening. I’ve been helping the B.C. campaign team and they’ve been sending me to various key ridings, doing some media, some healthcare forums, rallying the troops, talking with candidates. It’s been fun.

But helping out and running for re-election are two completely different commitments. Do you miss campaigning as a candidate?
I counted up that I think I’ve run in 15 elections — that’s run in, not helped out on. So I feel like I’ve had my fill. I mean I first ran in 1976 [for city council] when I was 23. I love engaging with people but it also requires a lot of energy and I’m ready to move on.

Give readers a sense of what it’s like to be a candidate a couple weeks out from election day. What does that look like?
At the beginning of the campaign, especially this one, you think it’s going to go on forever. It just stretches out in front of you. And then by the time you get [a few weeks away], then you start hitting the panic button. “Oh my god, I should have done this. Oh my god, I should have done that. Oh my god, I haven’t phoned back so-and-so.” You’re tired. The jitters start to set in. For the candidate, it’s really about keeping your team motivated so that “we can get to the end here.” So you need to have good stamina.

How is NDP leader Tom Mulcair different from the late Jack Layton?
Oh, boy. You know what, you’re the first person who’s asked me that. Jack was part of the folks. All those polls about who would you like to sit down and have a beer with, he always won them, overwhelmingly. He was like your great neighbour next door. I think Mulcair has been a more complex individual for people to get to know. But seeing him in action, you see this very experienced, hard-nosed tough guy who can take on Stephen Harper. That’s won him a lot of accolades. He’s grown enormously in his rapport with people. You see him now in the campaign and he looks laid back, he looks easy-going, he looks like he’s enjoying himself. So that’s been really wonderful to see.

You only met once with Prime Minister Stephen Harper. That was in 2006 and Winnipeg NDP MP Bill Blaikie joined you. What’s Harper like behind closed doors?
There was always a politeness and courteousness, but nothing beyond that. I don’t find him that approachable, whereas [former Conservative minister] John Baird and I got along very well. He was the Conservative House Leader for a period of time when I was still the NDP House Leader. We worked closely, talking about what was going on in the House. We would make jokes, so you develop a personal rapport with someone you’re working with, even though they’re on the other side.

In your closing address in June to the House of Commons, you turned to poetry and read an excerpt from Downtown Eastside poet Sandy Cameron’s book, Being True to Ourselves. Why did you do that?
I really felt like this idea that you get up and make a big speech about leaving, I was just not into that. So I used my last statement — and it’s only a minute — to reflect something that was bigger than politics. When I first got elected, one of the first things I spoke about in the House was the number of people dying from drug overdoses. At that time, I read a poem from Bud Osborne, who had a huge influence on me. So I felt like closing the circle. Sandy Cameron was always sort of known as the community historian of the Downtown Eastside.

What was your toughest day on the job?
Well, I guess personally — and I don’t really want to dwell on it — was the day that a Liberal member got up and read a very vicious statement about me because of comments I had made about the Middle East. And the Liberals and others all got up and cheered. I sat there quietly, not reacting and thinking, “Wow this is really screwed up.”

I imagine you’ve got boxes and boxes of files and documents from your time as a politician. What are you going to do with all that stuff?
The national archive did invite me to put together an archive, which they don’t do with everybody. They’re interested in the issues you mentioned about harm reduction, homelessness, sex trade workers’ rights and safety, and a lot of that goes back to the ’70s. I started working in the Downtown Eastside when I was 19. So those issues I worked on as an organizer, as a city councillor, as an MP — the archives are interested on the progression of how these issues evolved. We have probably about 70 boxes of stuff that will be on their way to [Library and Archives Canada].

You ran for mayor in 1993? Have you given any thought at another run at the mayor’s chair?
No, I’ve had people raise that with me. But I would like to see a woman mayor in Vancouver, though. Isn’t it incredible that we’ve never had a woman mayor?

What are you going to do after the NDP’s campaign wraps up Oct. 19?
Sleep. Seriously, I’m tired. I’m going to take some time off. I’m just going to chill out for a while. But I know at the end of the day, I’m a political animal and I still deeply care about the issues [of poverty and social justice].

Nothing lined up for the future?
Not particularly. I’m the kind of person who has never planned anything in my life. I never dreamed, or thought, or planned to be an MP or a city councillor, for that matter. So I just kind of fall into things. So I’ll see what I fall into next.

This interview was edited and condensed.