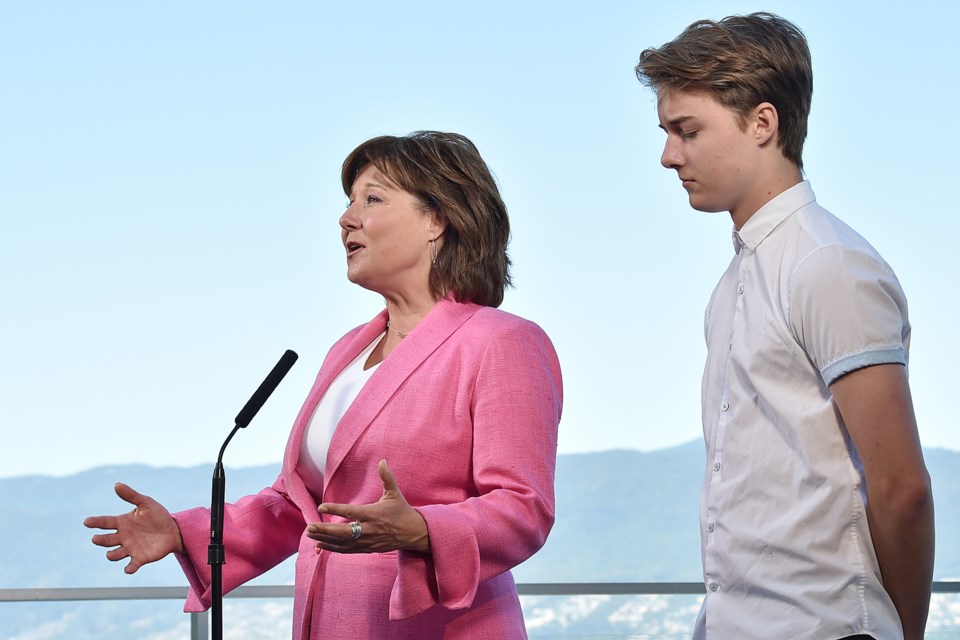 Former B.C. premier Christy Clark, with her son Hamish, spoke to reporters Monday at what was the Liberal leader’s final news conference before she retires Aug. 4. Photo Dan Toulgoet

Reporters got the full Christy Clark at her final news conference Monday as leader of the B.C. Liberals: She was characteristically upbeat, predictably partisan and, at times, philosophical about her six-and-a-half years as premier of a province now run by Premier John Horgan and the NDP.

Will she run again?

She provided two answers, one short, one long.

“I’m done with public life,” she said, standing with her teenaged son, Hamish, on a patio on the ninth floor of the Shaw Tower downtown. The backdrop was Stanley Park, the North Shore mountains and a busy harbour, all lit up by the sun.

So that’s it — you’ve ruled out politics, altogether?

“I’m not planning on going back, that’s for sure,” said Clark, who announced her resignation July 28 and will spend her last day as leader this Friday. “You know, to me politics isn’t a happy job — like it’s not a fun job, really. It’s a fulfilling job though and it’s really interesting and I love doing it. And to me, life is not about being happy, though — life is about doing service for others. So I’m going to find a way in my next career to do service, to continue to do service, to try and make other people’s lives better. Because to me, that’s the path to happiness. But I don’t see that being in politics anymore. I think being premier of British Columbia for six-and-a-half years was such a privilege, I don’t think I can get a better, more interesting, more fulfilling political job.”

The news conference lasted just under 13 minutes. It began with the 51-year-old Clark first talking about her son and explaining why she decided seven years ago to seek the leadership of the B.C. Liberals. She did it, she said, because she wanted Hamish to “see me in public life, wanted [him] to see me try to do good in the world and do public service.”

Then she went into what resembled campaign mode, listing off her party’s accomplishments over her term. B.C., she said, had the fastest growing economy in the country, with 200,000 jobs created and five consecutive balanced budgets. Thousands of people were put to work on the Site C dam and the government negotiated labour agreements that "were affordable," leading to "the longest period of labour peace with the teachers."

Her government, she continued, reduced the number of children in care by a third, more children were adopted and “thousands” of single parents moved from welfare to the workforce under a program called the single-parent employment initiative. The Great Bear Rainforest was protected and the government concluded treaties and signed more than 450 agreements with First Nations, she added.

“I would say I’m proud of all of [the accomplishments], but, you know, as a leader you know when it’s your time to leave, and this was my time to leave,” said Clark, who revealed she was prepared to resign the day her government lost a confidence vote in the B.C. legislature to the NDP and the Greens.

That vote confirmed what she was thinking on election night — that she knew “in my heart” it was time to leave. She stopped short of announcing her resignation on the day of the confidence vote to allow time for her caucus to get set up in the Opposition offices and get organized.

“I didn’t want to leave in the midst of chaos,” she said, before explaining that her party’s caucus retreat in Penticton last week opened the door for her resignation, which came Friday. “It was kind of that night in Penticton that in my head I decided it was time to go. And my head caught up with my heart. I took a walk along the lakeshore on Friday morning and I knew it was time to leave.”

Clark dismissed a question that she chose to resign because she wasn’t confident she could lead the Liberals to victory in another election. Her answer was that it was time for her party to renew itself. All caucus members at the Penticton retreat wanted her to stay, she said.

Besides, she added, she was confident an election wouldn’t be called in the fall and would give time for the Liberals to regroup and find a new leader. She wouldn’t discuss any of the rumoured candidates to take her job, including former Surrey mayor Dianne Watts, former transportation minister Todd Stone and former Liberal cabinet member Kevin Falcon.

In the days leading up to her government’s throne speech in June, Clark and her Liberals lifted policy planks from the platforms of the NDP and Greens. Those planks included a poverty reduction plan, banning union and corporate donations to political parties, a referendum on electoral reform and eliminating tolls on the Port Mann Bridge.

Asked whether her successor would be tied to those promises in the throne speech, Clark said that person will be able to do whatever she or he chooses to do. She also clarified that “I wouldn’t say that I support NDP policies” but that her party “may support some of the same principles.”

The election results showed the Liberals lost votes and traction in Metro Vancouver, where an urban agenda championed by the region’s mayors of reducing homelessness, improving transit and creating affordable housing was admittedly ignored by Clark and her party.

She has said several times since the election that her party had to do more to bridge the urban-rural divide in British Columbia. But she argued creating more affordable housing and reducing the skyrocketing housing prices in Metro Vancouver is not all on the government.

“There are only two things that the government can do to really affect housing affordability in the Lower Mainland — one, is to get the mayors to build more houses, to approve more houses to be built. And the second is, slow the economy down so people stop coming to the Lower Mainland and buying houses.”

Clark’s son spoke briefly to reporters, saying he wasn’t prepared to speak and wasn’t aware his mom was taking him to a news conference. Asked what his reaction was to learning his mom would no longer be working in politics, he said he felt relieved.

“Six-and-a-half years has been a long time,” he said. “She’s been premier for most of my life, that I can remember. So I think it’s going to be an interesting change. It’s going to be really cool, going to be fun.”

Clark said she and her son plan to attend several theatre shows, having just purchased two subscriptions to the Arts Club Theatre Company productions. Clark said she will spend more time ensuring Hamish does his homework as he enters Grade 11.

To a question about whether she would recommend Hamish one day pursue his mom’s path in politics, Clark said what he does is completely up to him.

“He’s a talented young man,” she said. “I think he has a great future in theatre. I’m looking forward to being a stage mom.”

Premier Horgan has six months to call a byelection to replace Clark, who served as MLA for Westside-Kelowna. Clark’s resignation leaves the Liberals with 42 seats to the NDP’s 41 and the Greens, three. The NDP and the Greens agreed to a power-sharing agreement after the May 9 election, which topped the Liberals after a 16-year reign in B.C. politics.