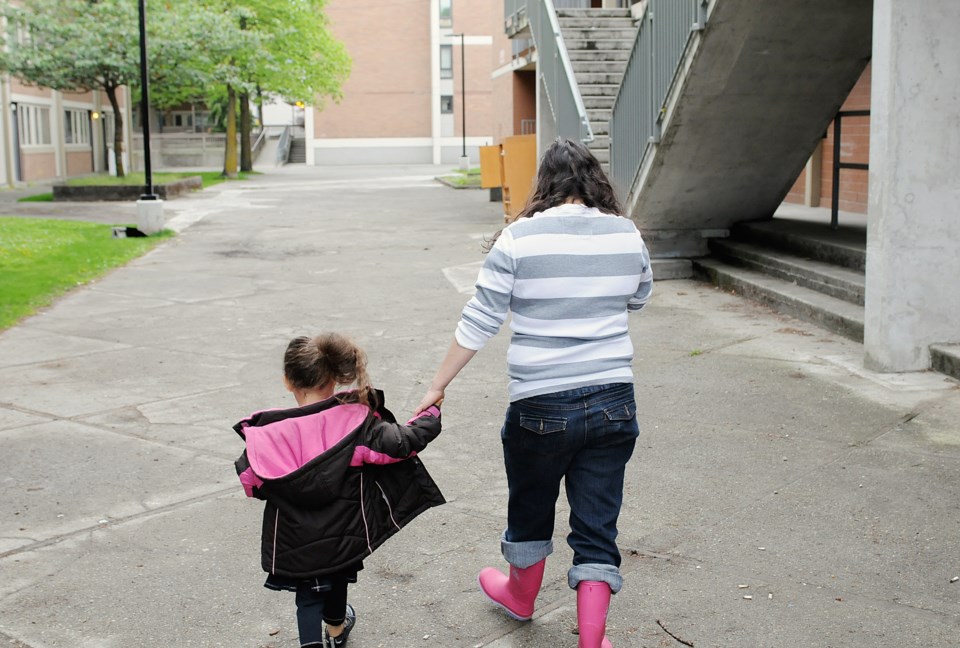 A child poverty report card found that one out of every five B.C. children lives in poverty, and that children living in lone-parent families, the vast majority of them single-mother families, had a poverty rate of 50 per cent in 2012. Photo Dan Toulgoet.

Vancouver teacher Anna Chudnovsky sees more than one of the 169,420 children who live in poverty in B.C. in her inner city school classroom.

One of them came to school when temperatures plummeted wearing flip flops, his only shoes. When a support worker encountered this eight-year-old’s mother last week, the mom cried because she only had a jar of olives in the fridge, she is to give birth any day and she was worried she wouldn’t be able to buy groceries before the baby came. When Chudnovsky’s student’s younger brother fell at school and banged his head, the school secretary had to walk to the home to contact his mother because their phone line was out of order.

Then the mother confessed she didn’t know how she’d manage a trip to the hospital because she lacked bus fare for herself and her three kids.

Chudnovsky shared this tale of a stressed family at the media release of the 2014 B.C. Child Poverty Report Card, which found little progress has been made to reduce child and family poverty in B.C.

“At 21 per cent, B.C.’s child poverty rate is higher than the Canadian average of 19 per cent and represents 169,420 children — enough children to fill the Canucks’ stadium over nine times,” the related press release states.

Not only did the report, prepared by the First Call: B.C. Child and Youth Advocacy Coalition with the help of the Social Planning and Research Council of B.C., find that one out of every five B.C. children lives in poverty, it also found that children living in lone-parent families, the vast majority of them single-mother families, had a poverty rate of 50 per cent in 2012, and were living $10,000 below the poverty line, on average.

Becoming a single mother when her son was four weeks old plunged Viveca Ellis into poverty. She received basic employment insurance from her full-time job during her maternity leave but couldn’t live on that.

Ellis took a part-time job that allowed her flexibility to take care of her baby. But she earned $13 an hour and paid her caregiver $11 an hour. She subsequently applied for welfare and learned her child support could be clawed back.

Ellis, who co-founded the Single Mothers’ Alliance of B.C., eventually escaped poverty by securing a job in her field that paid a wage that allowed her to rent an apartment, feed herself and her son, get a bus pass and afford childcare.

Adrienne Montani, First Call’s provincial coordinator, says the premier’s office needs to lead a coordinated poverty reduction plan that would provide affordable childcare, boost income assistance and increase minimum wage to $15 an hour. She said every other province has some sort of plan.

Montani cited the Canadian Centre for Policy Alternatives’ The Cost of Poverty report, released in 2011, that states a comprehensive poverty reduction plan in B.C. would cost $3 to $4 billion a year whereas the cost of doing nothing is $8.1 to $9.2 billion.

The Courier phoned the premier’s office but in response received a statement from Children and Family Development Minister Stephanie Cadieux that read: “In B.C., we don’t feel a legislated plan is required to help children out of poverty. Three of the four provinces that have legislated poverty plans in place have a higher poverty rate than B.C.”

The statement noted the government provides childcare subsidies, has increased minimum wage, offers “one of the most comprehensive universal Pharmacare programs in Canada” and charges lower taxes.

“In terms of setting income assistance rates and child support policy, we have to take a balanced approach — a realistic undertaking between what is fair to individuals seeking assistance and what taxpayers can support,” the statement said.

“Look at the choices that governments make,” Montani said. “At the federal level, just give me one fighter jet to melt down and put into childcare.

“Nobody’s asking for a fully blown childcare system tomorrow,” she continued. “But we could have it incrementally built over time just the way we build bridges or we build giant dams... We could do that with a social infrastructure and it would have such payoff.”

The report is available at still1in5.ca.