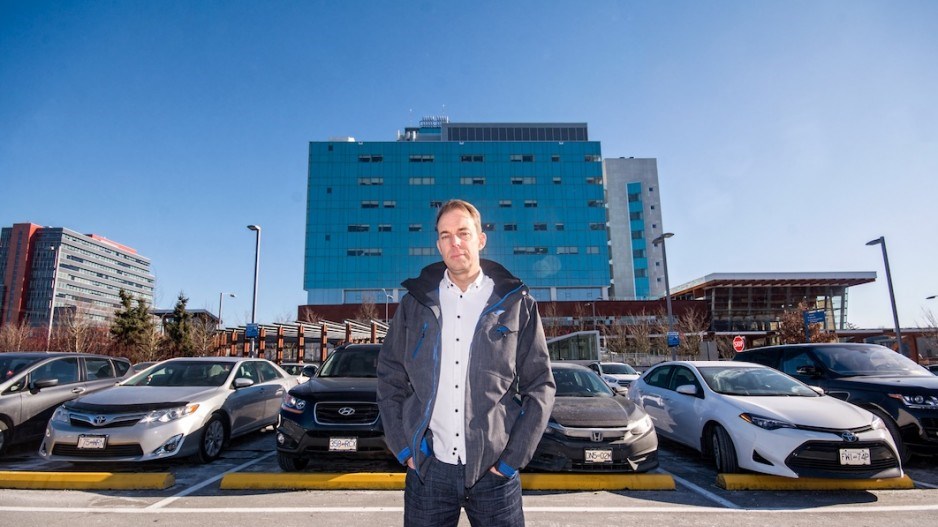 HospitalPayParking.ca founder Jon Buss believes it is immoral to charge for parking near hospitals because access to health care should not be limited. Photo Chung Chow

A lobby group has gained what it thinks is popular support for its cause to have free parking for visitors and patients at all hospitals in the province.

Perhaps unsurprisingly, unlimited free parking was the most popular response in an online poll the group conducted of what parking system hospitals should provide.

Enacting free parking at hospitals, however, has a number of logistical challenges. The province’s health authorities also raised about $34.3 million from parking in 2018, and that money would have to come from other sources or health-care funding in the province would take a hit.

To Jon Buss, who founded and heads HospitalPayParking.ca, those challenges can all be overcome. And the money raised, he said, is a drop in the bucket, considering the province’s approximately $12.8 billion budget.

“People really react to this issue because they know, in the heart of the matter, it’s wrong and immoral,” he told Business in Vancouver.

“People’s state is weakened [when they need parking near a hospital],” he continued. “They are not well.”

Impark also gets to collect revenue from all violation tickets issued to drivers in the lots. In exchange, the health authorities get all revenue from parking fees.

Buss believes the PHSA can cancel that contract unilaterally without any penalty.

Vancouver Coastal Health board chair Kip Woodward wrote in an October 2018 letter that “approximately one-third of monies collected” from the authorities’ parking lots go to provide parking management, including maintenance.

Buss questions whether that is an efficient way for health authorities to raise revenue, as well as whether it is a fair one.

“I’ve spoken with a few anti-car people,” he said. “They say, ‘Take the bus. Get on a bike. Walk.’ That’s nonsense. People need to get to the hospital in an expedited manner. They’re going to use a car if it’s good for the environment or not. That’s reality.”

He also objected to the argument that this form of user-pay system is justified, given that other aspects of user-pay are already in place at hospitals. People who break their arms and go to emergency, for example, are charged for slings.

One major challenge to implementing free parking at hospitals could also be that the lots will attract people who want to park and shop at nearby businesses.

Buss responded that kiosks could be placed at the entrances to hospitals where visitors would input their licence plate numbers and the first initials and last names of the people they were going to visit — or their own names if they were going to emergency.

The problem with this system, he accepts, is that the kiosk technology would not be able to confirm that any specific person is in the hospital, for privacy reasons. The visitors, therefore, could not be assured that their cars were safe from being ticketed as a result of them inputting the wrong names, or misspelled names.

That system would also require the hospital to verify each attempt at free parking and alert municipal enforcement staff of invalid attempts to get free parking. That would increase parking-monitoring costs for municipalities.

“These are just ideas to get the juices flowing,” he said. “We’ll have the accountant guys figure the dollars out.”

B.C. Liberal health critic Norm Letnick toldBIV that he would like to meet with Buss to hear his ideas.

“This is a conversation that we have to undertake, and I am happy to sit down with them,” he said.

In contrast, Buss said he has been trying for many weeks to speak with Health Minister Adrian Dix, to no avail.

Dix sent a statement to BIV saying that the amount of money British Columbians have spent on hospital parking “has increased dramatically over the past 15 years under the previous government.”

He said he hears concerns about parking wherever he goes across the province and that he is looking into the issue.

“One action that we have taken is that pay parking is not being expanded to new sites,” Dix said. “We are systematically reviewing issues around parking across the system.”

When BIV asked if Dix is considering other potential ways to raise the $34.3 million annually, his ministry sent back a response saying, “When we have more to share, we will.”