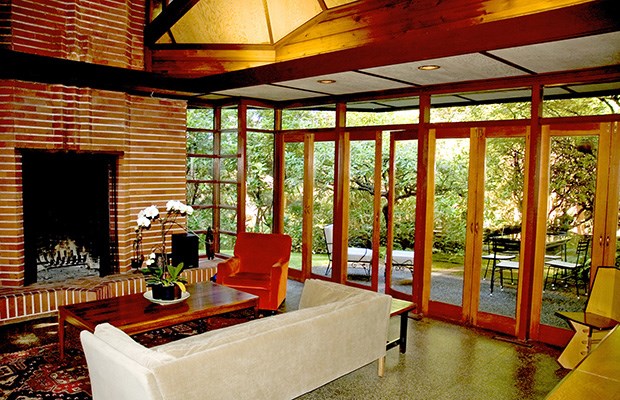 The Vancouver Heritage Foundation's Mid-Century Modern tour has proven so popular that this year's Aug. 17 event includes a self-guided option.
"The demand for this tour so far outstripped our ability to do bus tours that every year we had this long waiting list," said Diane Switzer, executive director of the Heritage Foundation. "The buses were full up by, say, June." Participants will tour five homes in Vancouver and on the North Shore. Of those homes, only one has been included on the tour in the past six years.
"And that was probably one of our most popular houses ever on the tour," Switzer said.
It's a U-shaped home on the University Endowment Lands that features a reflective pool in its central courtyard and glass walls on three sides. The home was built in 1956 by Robert McKee and renovated in 2007 by Nick Milkovich, with landscaping by Order of Canada winning landscape architect Cornelia Hahn Oberlander.
Included for the first time is a T-shaped home off Southwest Marine Drive that the McFetridge family commissioned prominent local architect Harold Semmens and Associates to build in 1960. The home had fallen into disrepair until a nephew of the McFetridge family bought it a few years ago, with the expectation it would need serious renovations. But Switzer says they found its layout, with the children's bedrooms in one wing, the master bedroom in another, so livable that little had to be remodelled.
"This house, in a lot of ways, turns its back to the street as so many of these houses do. They look like they're just a garage with a very interesting door and entryway, but then they all open up into forest and a beautiful courtyard kind of feeling at the back," she said. "It's got this fabulous - I've never seen it before - red slate in the hall and it's just a beautiful colour... There's these Shoji screen doors into the dining area. It's a very open plan... It just feels good."
New, modern styles of architecture were brought to Vancouver and the North Shore from Europe and the United States after the Second World War.
Clean lines, exposed beams and locally sourced materials that lead from the exterior to the interior characterize Vancouver's version of Mid-Century or West Coast Modern.
Switzer says it's important to celebrate this style of home that was built locally between 1950 and 1975.
"We don't have a lot of local architecture here. Most of our architecture, or our historic architecture, was brought from other places until this Mid-Century Modern period," she said. "Ron Thom and Fred Hollingsworth and Barry Downs, these people developed a way of building that was all our own... They're an important part of our architectural history and they tell a certain part of our story post World War Two."
Switzer says more Mid-Century Modern homes weren't built here for a couple of reasons.
"Tastes change after a while," she said. "Around 1965, the Vancouver Special popped up... Vancouver had already been surveyed into 33-foot lots. Mid-Century Modern homes are really not suited to those long, narrow lots. So immigrants were looking for housing that maximized 33-foot lots, which the Vancouver Special did."
The tour runs noon to 5 p.m. with a wine and cheese reception afterward at VanDusen Botanical Garden.
For more information, see vancouverheritagefoundation.org.
crossi@vancourier.com twitter.com/Cheryl_Rossi