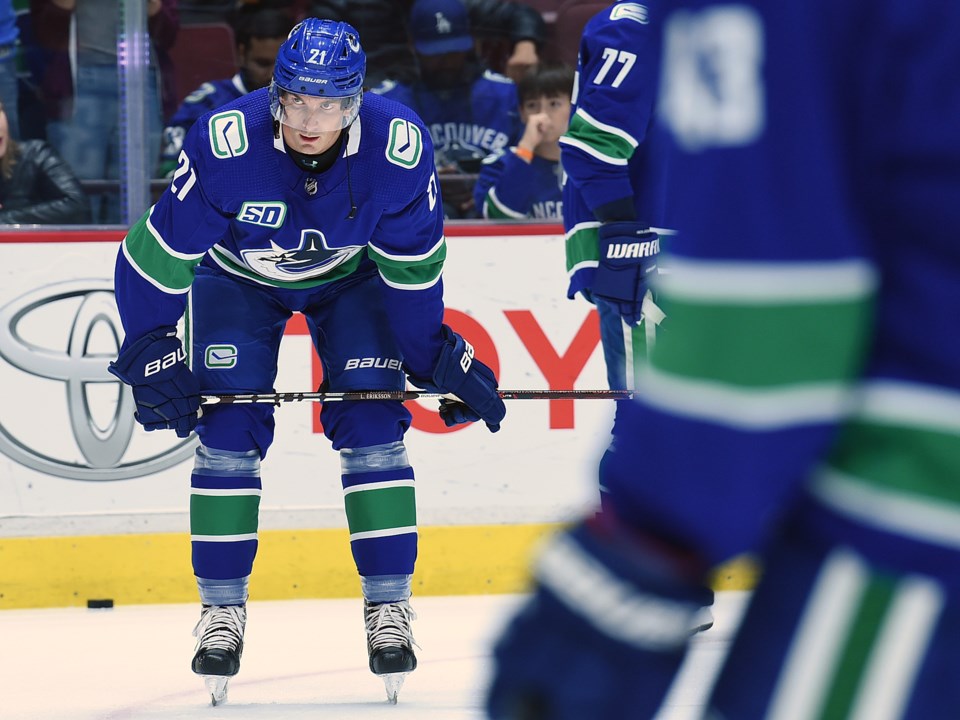 Bo Horvat was supposed to have better and more consistent wingers this season. The Canucks added J.T. Miller and Micheal Ferland in the summer with the intention of providing their top-two centres, Horvat and Elias Pettersson, with some solid wingers.

That’s worked out well for Pettersson, who has found chemistry with Miller and Brock Boeser to form what fans call The Lotto Line. Pettersson leads the Canucks in scoring with 44 points through 42 games, while Miller is right behind him with 40 points, on-pace to obliterate his career high of 56 points.

Horvat hasn’t quite seen the same benefit. 12 different forwards have played at least 20 minutes with Horvat at 5-on-5 this season, echoing the inconsistency of his linemates last season. Horvat talked about the importance of consistent linemates back in September, before the season began.

“It'd be great, I'm not gonna lie,” he said. “Last year with injuries and stuff, playing with pretty much everybody and every combination you can think of, it's tough to get chemistry.”

Horvat has had one fairly consistent linemate this season: Tanner Pearson, who sits fifth in Canucks scoring behind Horvat. On the other wing, however, he’s seen a wide variety of players, none of whom have stuck long-term.

That’s partly because of injuries. Antoine Roussel missed the first two months of the season recovering from knee surgery, Micheal Ferland suffered a concussion a month into the season, and Josh Leivo fractured his knee cap a few weeks ago.

Beyond those injury issues, it’s been hard to find the right fit for Horvat, which has led to some struggles at 5-on-5 this season for the Canucks captain. While he’s still put up points on the power play, Horvat has just four goals at 5-on-5.

Two of those goals, however, have come since one particular winger has joined his line. The duo of Horvat and Pearson have been at their best with one particular linemate: the much-maligned Loui Eriksson.

The Canucks’ highest-paid forward has never lived up to his hefty contract and has spent much of this season in the press box as a healthy scratch. When he has played, he’s primarily been in a fourth-line role and has been invisible on the scoresheet.

In this last stretch of games on the second-line with Horvat, however, Eriksson has looked comfortable and been productive. He has four points in his last six games, a solid hot streak by his standards, and the impact he’s had on Horvat and Pearson is noticeable.

On Saturday’s tight-checking game against the New York Rangers, for instance, the Horvat line provided both Canucks goals and Loui Eriksson played a key role. On the first, he set up in front of the net and tipped Horvat’s centring pass back between his legs, creating the rebound; on the second, he set a perfect screen in front of goaltender Alexandar Gieorgiev.

Eriksson’s simplified go-to-the-net strategy in the offensive zone seems to be exactly what Horvat needs, but more importantly, Eriksson is solid defensively. With Adam Gaudette centring a more offensive-minded third line, Horvat has had to take on the match-up role against opposing top lines, which has been a tough ask for some of the wingers on his line. Eriksson, however, is up for that particular task.

Looking at the underlying numbers of the Horvat line via analytics site Natural Stat Trick, the difference with and without Eriksson is stark. The Canucks control 54.22% of the shot attempts (corsi) with Eriksson, compared to 50.53% without him, but scoring chances are even more tilted: 55.29% with Eriksson; 45.73% without Eriksson.

While Eriksson is unlikely to play up to his high-priced contract, perhaps he can at least help Horvat live up to his.

A tap of the stick to Chris Gear, who the Canucks promoted to Assistant General Manager this week. Gear has been a key player in hockey operations for the Canucks for four years, handling legal issues, contract negotiations, and business operations.

A stick-tap to Team Canada, who came through with the gold medal at the 2020 World Junior Championship. They shook off the worst loss in Canadian World Junior history — a 6-0 thumping by Russia in the preliminary round — to defeat Russia 4-3 in a thrilling gold medal game.

14 - The Canucks have one of the best records at home in the NHL, with 14 wins, 5 losses, and 3 overtime losses. That’s good for the fourth-best home record in the league this season.

11 - Canucks prospect Nils Höglander was one of the best players at the 2020 World Junior Championships, finishing third in scoring with 11 points in 6 games.