TransLink introduced a new system Tuesday — the first of its kind in the world — that allows people with disabilities to pass through fare gates without having to tap their Compass Card.
Jan 23, 2018 12:11 PM By: Naoibh O’Connor 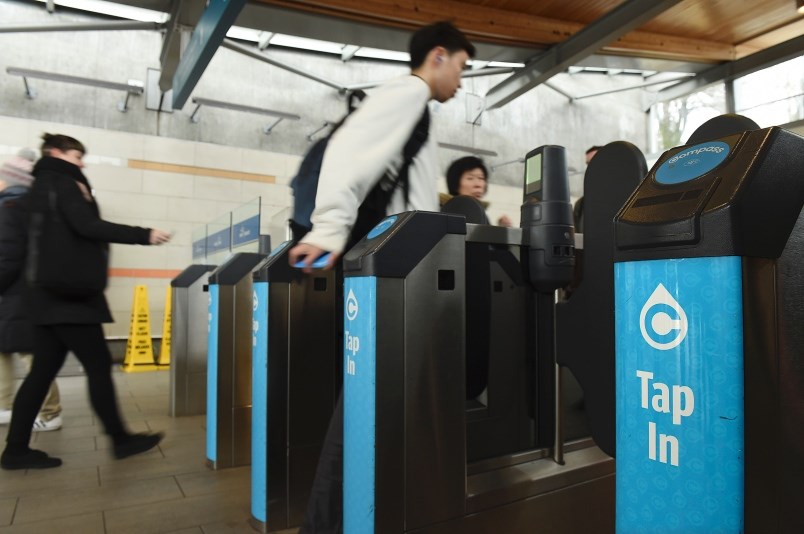 TransLink is testing out various alternatives to Compass CardsDan Toulgoet

TransLink introduced a new system Tuesday — the first of its kind in the world — that allows people with disabilities to pass through fare gates without having to tap their Compass Card.

When Compass cards and fare gates were introduced, transit users who are unable to raise their arms found they couldn’t get through the gates without help.

The Universal Fare Gate Access Program, unveiled at a press conference Jan. 23, uses radio-frequency identification (RFID) technology. RFID readers are being placed above accessible fare gates, which will be labelled with the RFID logo. Eligible customers will be given cards that will open the RFID-enabled gates when the card comes within a certain range and close them after the user passes through. The system has a range of two to three metres. The technology was designed by TransLink and implemented in partnership with Vancouver-based Hyperlight Systems.

About 40 per cent of SkyTrain and Seabus stations have been equipped with the new feature and TransLink is on track to complete the rest of the system by the end of the year, according to TransLink CEO Kevin Desmond.

“We are not aware of any transit system anywhere on this globe that has put together a program like this,” Desmond said at the press conference. “It’s a program that allows people with disabilities who are unable to freely use the compass media to access the gated transit system independently. And independence is the key — commuting to work, getting to appointments, visiting friends — mobility many of us take for granted.”

He committed to finding a solution to the fare-gate accessibility problem shortly after being named CEO in 2016. He called the new system “seamless” for TransLink customers.

“We want to make sure anybody and everybody who wants to use the SkyTrain system can use it when they want and how they want,” he said. “This is an innovative solution for our customers… This is a made-in-B.C. solution that we hope the world takes notice of. No other transit system in the world offers fully automated touchless access to a gated system.”

Desmond promised to listen to feedback as the technology is rolled out and make adjustments as necessary.

Jane Dyson, executive director of Disability Alliance B.C., welcomed the program, saying it will make travelling by transit much easier for seniors and people with disabilities.

“I don’t know if you can imagine how undignified it feels to be unable to tap in independently and to have to ask somebody to help you. Nobody wants that. People with disabilities are no different from anybody else. They want to be able to go about their business independently,” she said. “So here we are today with this really fabulous announcement. It’s a milestone on the technological side because, as we’ve heard, it’s the first in the world as far as we know, but it’s also very significant because it demonstrates what can happen when community works with the people in power.”

Tim Louis, a lawyer and a former Vancouver city councillor who uses a wheelchair, called Vancouver a “trailer blazer” for introducing the new touchless access program.

“I’m very pleased TransLink has moved heaven and earth to make this happen. They’ve have spent a significant amount of money. They are to be commended,” he said. “It’s a big step forward. It eliminates a very significant barrier to the use of the SkyTrain by folks that have limited arm function. I’m very pleased that within days of Kevin Desmond being made aware of the problem he committed to do whatever needed to be done to get it fixed.”

The Universal Fare Gate Access Program costs $9 million, which is a part of the $740-million Public Transit Infrastructure Fund (PTIF).  PTIF is funded by the Government of Canada at 50 per cent and the Province of British Columbia at 33 per cent and TransLink at 17 per cent.

Eligible customers can apply for the program here.

Several initiatives have been introduced recently to improve people with disabilities’ access to facilities in Vancouver.

Last November, the Vancouver Park Board approved an accessible pier at Jericho Beach, while last August the park board introduced the city’s first accessibility mat at English Bay. It allows people with walkers, wheelchairs and scooters to more easily access the beach.