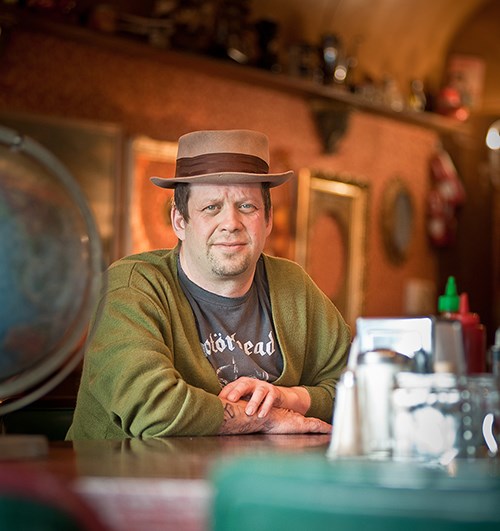 This story is not going to use a certain four-letter word that starts with f and ends in conflagration.

It’s the word that comes up most often in stories about Slickity Jim’s Chat ‘n’ Chew to explain why owner Mike Zalman is on his third location. (The first two locations were destroyed by that red-hot destructive force that reduces dreams to piles of charred embers.)

Zalman has been known to use the f-word but he’d like to move on from those dark days when he called himself Bad Luck Mike.

In other words, the f-word is not the one he wants forever associated with his popular Main Street diner/restaurant. He’d rather use a three-letter word that starts with a and ends with a multitude of possibilities.

“I like art that has a purpose,” he says of why he does what he does. “This restaurant is a big piece of art. If I didn’t have to charge people, I wouldn’t, but if I don’t have the money to practise my art...”

Art is in the food — To Mock a Killing Bird (eggs benny with avocado and roasted vegetables), the Are You Going To Be A Nacho Man appetizer and The Double Belly Buster Pork Platter for dinner, to wit.

Art is in the music — at the time of the interview, 1920s New Orleans jazz was creating yet another time travel dimension.

And art is in the décor — although kitsch might be the more creatively honest word. (Zalman gets up from our table to straighten a painting of a black Lab waiting to retrieve a duck that its owner is about to shoot.)

It’s in Zalman’s nature not to be defined by one thing, just like it’s hard to come up with a few words to describe the vibe at Slickity Jim’s, with its curved veneer-panel roof that makes you think you’re camping out in a vintage caravan trailer, bus-seat chairs and vintage treasures straight out of a 1950s rec room.

“I’m just doing what comes naturally,” Zalman says. “I use food as a method of communicating. The décor is a long story. It’s a vision of how I see the world.... Why does a painter paint? Why does anyone do anything? I don’t have designs on what I want it to be. I do what I do and people enjoy it.”

The house he rents, half of a duplex just a couple of blocks south on Main between the Lip Lounge and Vancouver Special, is one of the most photographed locations on the strip. Could it be the front garden of mannequin heads? Or maybe the upside-down mannequin leg on the porch or the ravaged mannequin heads in his window. The 1969 Norton motorcycle parked on the tiny patch of lawn has a head-turning effect, too.

The yard art grew organically from happenstance. His daughter was studying to be a hairdresser and practised on the mannequins which, having given their hair to a good cause, were given a place of honour in the windowsill.

Although Zalman was first assured that the recent sale of the home, for $1 million, wouldn't mean a change for him or his neighbour, he was dismayed when he found a development notice on his front lawn.

Happenstance also had a lot to do with turning a punk rocker into a restaurant owner. “When I was 15 with a purple mohawk, there weren’t many other jobs than kitchen work. It was either be a bike courier or a dishwasher.”

Restaurant jobs are a portable skill and when Zalman, who had dropped out of cooking school, landed in Vancouver, he started selling soup to Vancouver restaurants. When the old Eagle Grill at Powell and Victoria came up for rent, his wandering days were over. “It just had this dynamic cross section of people and it was what a restaurant should be — a place where the community gathers.”

When the roof of the building caved in in 1999, Zalman moved to Main and Broadway. The only other nearby businesses were Eugene Choo, Burcu’s Angels and Lugz Café. With its $3.75 breakfast and Zalman’s commitment to good grease, Slickity Jim’s soon became a mecca.

Slickity Jim’s and four other businesses were destroyed by that nasty f-word in November 2009, but Zalman was back at it again the following spring, with people lining outside his doors at Main and 19th from day one. In August 2011, it’s suspected that someone lit a you-know-what in a dumpster behind the building but Zalman was able to rebuild his treasured nook at the same location.

Knock on plywood, nothing bad has happened since then. You Gotta Eat Here dropped by last year, introducing the Food Network’s fans to Slickity Jim’s Abstract Notion, a menu choice that depends on the chef’s whims of the moment.

Zalman is joined in the kitchen by Mike Soret, the former frontman of the Molesticks and author of Confessions of a Local Celebrity: A Tale of Rags to No Rags. “He’s way over qualified to be working here,” Zalman says but Soret, like him, believes in the ephemeral creativity at play at Slickity Jim’s.

Mike Zalman is transforming Slickity Jim’s back room into a “1920s Chicago booze can speakeasy.” While the room will still stay open for breakfast, lunch and dinner, at night Zalman plans to close off entrance from inside the restaurant so you have to gain access via the back alley. With only 300 sq. ft. to work with, patrons will have to cozy up to hear music — probably acoustic —, watch a burlesque show or listen to live radio plays.