Daniel Peter Rintoul, 38, died Thursday after police shot him outside a Canadian Tire store
Nov 15, 2016 9:33 AM By: Mike Howell 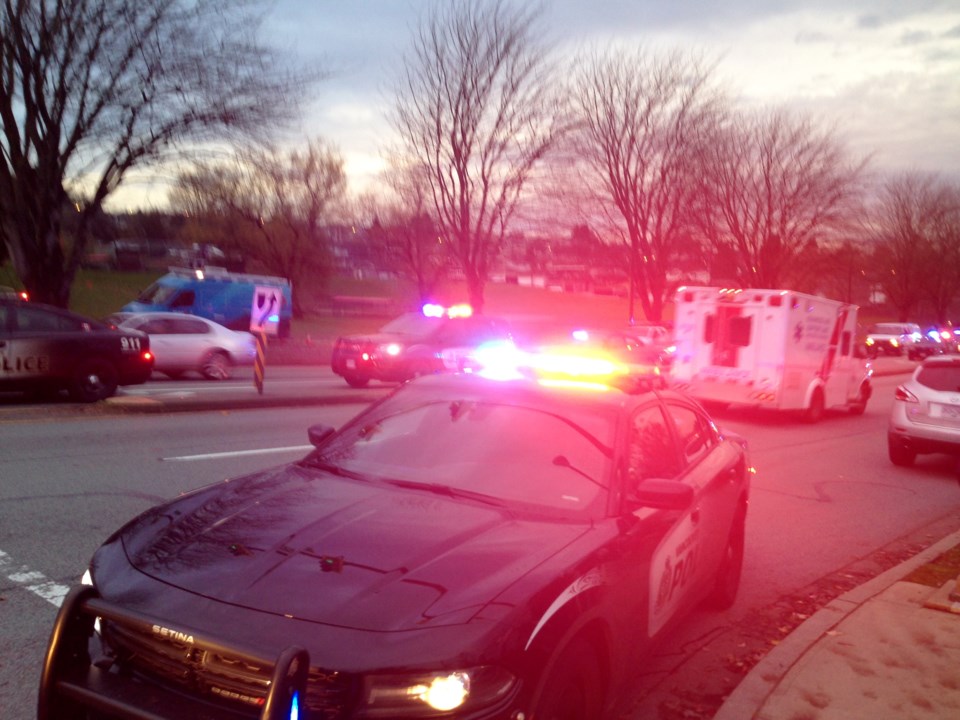 The Independent Investigations Office is now investigating the Nov. 10 incident at a Canadian Tire store on Grandview Highway where Vancouver police shot and killed a man who allegedly tried to rob the store. Photo Mike Howell

The 38-year-old man shot and killed by police outside a Canadian Tire store Thursday after what appeared to be a botched robbery may have had links to the Falun Gong and had a run-in with police in China when he was in his early 20s.

The B.C. Coroners Service announced Monday the man who died at the scene near Grandview Highway and Renfrew Street was Daniel Peter Rintoul of Vancouver. Police shot Rintoul after he allegedly stabbed a store clerk and police officer, who are both in hospital recovering from knife wounds.

Police said last week that Rintoul was originally from Alberta, where a Daniel Peter Rintoul, 23, lived in 2002 and wrote about practising Falun Gong and his pending trip to China. Practitioners of Falun Gong, or Falun Dafa, say it is a meditative exercise based on truthfulness, compassion and tolerance as taught by founder Li Hongzhi.

“I am not going to China for any frivolous reason,” Rintoul wrote in an article posted at minghui.org. “I have fully considered the possible consequences of peacefully appealing in China at a time when the persecution has claimed over 360 lives. As a nation dedicated to global peacekeeping, we Canadians consider ourselves to be good people who cannot simply stand by and be silent while the rape, torture and murder of untold numbers of innocent, kindhearted people is happening.”

According to a Calgary Herald article published in February 2002, Rintoul returned to Calgary from China, where he said he was arrested with about 40 western Falun Gong practitioners. Rintoul said bruises on his neck, forehead and arm and a swollen knee occurred during a confrontation with police while on his way to Tiananmen Square.

“Some police just pulled me over,” he told the Herald. “They started pulling me and then the police started punching and kicking me. One of them grabbed my throat and started crushing my throat. I squirmed free but then they forced me into the car where the officer pressed my face into the corner of the seat with his knee and then smothered my face with his hand. I could barely breathe.”

The article identified Rintoul’s mother as M.J. Rintoul. The Courier contacted his mother in Calgary Monday but she refused to comment and hung up the phone. The police have not said how long Rintoul resided in Vancouver or confirmed he is the same man who was affiliated with the Falun Gong.

Joel Chipkar, a spokesperson for Falun Dafa in Canada, told the Courier in a telephone interview from Toronto that he hasn’t confirmed that the man shot by police is the same person who practised Falun Gong.

“We have no idea if it’s the same guy,” said Chipkar, noting the Rintoul affiliated with Falun Gong hasn’t been seen by members for 15 years.

He said Rintoul went to China in 2002 on his own accord and wasn’t well known by other practitioners. What happened to Rintoul after he stopped practising Falun Gong is a mystery, Chipkar said.

“We appreciated his sympathy to our cause back then, but soon after he stopped practising and he was seen actually practising other religions and spiritual practices,” he said. “Talking to our people who knew him back then, he couldn’t hold a job, he never took care of himself physically, he looked homeless, he was always very difficult to get along with.”

Chipkar said he was concerned the Chinese government will now link the Rintoul killed by police with the Rintoul who used to practise Falun Gong and use the incident as propaganda against the exercise.

“Falun Gong promotes truthfulness, compassion and tolerance,” he said. “It says right in the teachings that any sort of violence or killing is strictly, strictly forbidden.”

Police responded to the Canadian Tire store around 3 p.m. Thursday after receiving multiple 911 calls. Police said a man entered the store, which is located in a shopping complex that includes a Save-On Foods, dressed in camouflage gear, stabbed a store clerk and began removing firearms from gun cabinets.

Police said the man used a knife to hold an 82-year-old man hostage before exiting the store into a rooftop parking lot. Witness Katarina Mitchell told the Courier the man was armed with a rifle and sprayed an unknown substance at an officer before being tackled to the ground.

Police said a search of the suspect’s house found “concerning evidence of his possible criminal intentions, which will all be part of this ongoing investigation.”