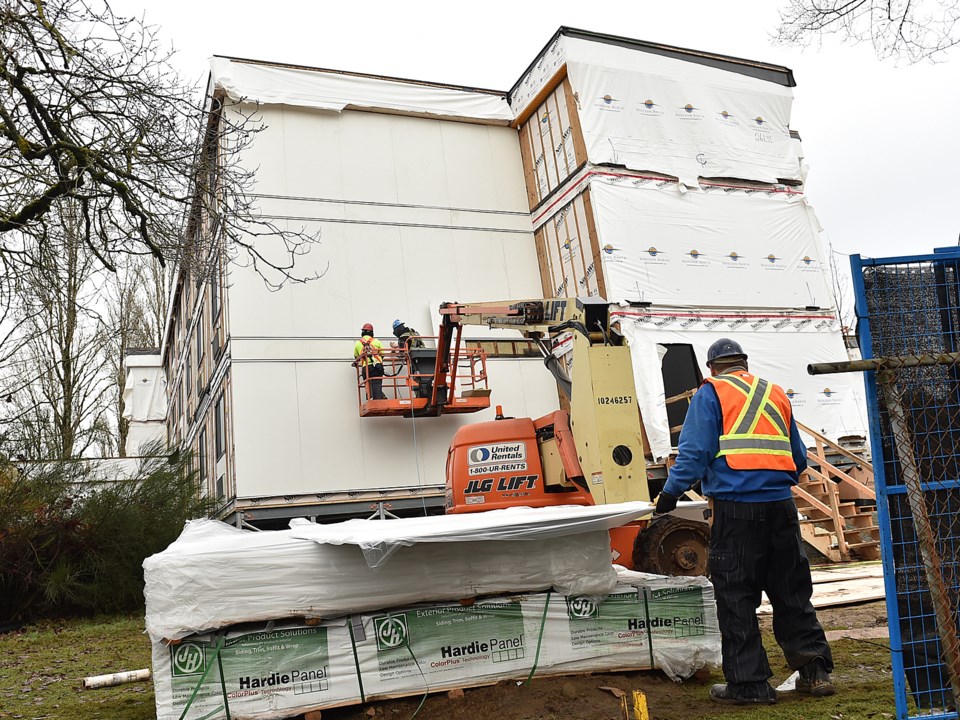 Construction crews were busy Monday assembling a 78-unit modular housing complex that will be home to homeless people. The first of the two buildings is expected to open in February. Photo Dan Toulgoet

A modular housing project in Marpole for homeless people is taking shape and at least one of the two buildings that comprises the 78-unit complex is expected to open in February.

The Courier’s visit Monday to the site at West 59th Avenue and Heather Street showed that builders had assembled both structures and were working on installing siding on the buildings. No protesters or protest signs were visible.

The project has been controversial because many residents have protested its proximity to three schools, prompting a “right idea, wrong location” campaign. In December, the city successfully sought an injunction to order protesters from outside the site so construction crews could begin the project.

In September, the provincial government granted Vancouver $66 million to build 600 units of modular housing for homeless people. So far, the city has identified five sites across Vancouver as future sites for the self-contained housing.

Those five sites, including two in the Downtown Eastside, one in the 4400-block Kaslo Street and another near the Canada Line’s Olympic Village station, will mean homes for 260 people. That leaves 340 left to find. The city expects it will need a total of 10 to 12 sites to accommodate the 600 units.

The city’s first modular housing complex, which was not part of the $66 million building program, opened early last year at Main and Terminal. The 40-unit building was built and designed in six months and cost $3 million, none of which came from the former provincial government.

Last March’s homeless count revealed that more than 2,100 people were homeless in Vancouver, with the majority living in some form of temporary shelters. More than 500 people were living on the street.