Marpole housing complex for homeless to open in February 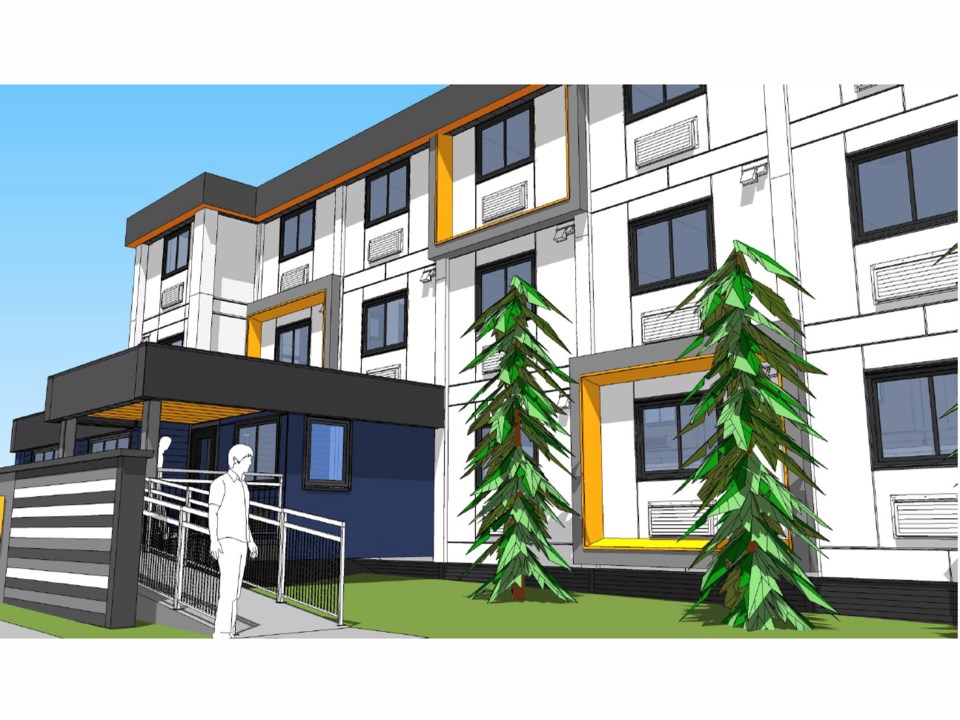 A 78-unit temporary modular housing complex to house homeless people is expected to open in February. The complex will be built at West 59th Avenue and Heather Street in Marpole. Photo courtesy City of Vancouver.

Mayor Gregor Robertson has stated publicly for weeks that a controversial proposal to allow the construction of a 78-unit modular housing complex in Marpole for homeless people will be built — and that promise was confirmed Monday by the city’s director of planning.

The city announced in a news release that Gil Kelley gave “conditional approval” for Horizon North’s development permit to proceed with the project on property owned by developer Onni Group at West 59th Avenue and Heather Street.

Prior to the news release being issued, Kelley sent a letter addressed to “members of the Marpole community” explaining his decision. He prefaced it by noting he met with parent advisory council representatives, community leaders, the Vancouver School Board and project sponsors. He added that he also read numerous letters and summary comments from four open houses regarding the project.

Over the past month, hundreds of Marpole residents held several protests opposing the complex, which they argued was too close to three schools and worried a mix of tenants with mental health and addictions issues would put students in danger.

“I’ve taken this decision very seriously and taken into consideration everything I’ve heard from the above community members and stakeholders,” Kelley said. “I’ve also looked at the city’s overall need to support and house our most vulnerable residents, especially in light of the increasing number of homeless residents on our streets. After taking a holistic assessment, I have decided to issue the development permit.”

He concluded his letter by saying, “I think with good will on all sides, we will all be proud of this effort.”

The Courier contacted a representative of the recently formed “Right Idea, Wrong Location” organization that has led protests and delivered a petition to city hall with more than 5,000 names opposing the project.

The complex will be across the street from Ideal Mini School and Sir Wilfrid Laurier elementary school. Sir Winston Churchill secondary is two blocks north of the site at West 59th Avenue and Heather Street. Residents interviewed at two protests told the Courier they were not against housing projects for homeless people, but didn’t want such a project in a neighbourhood with three schools.

“Our group will not be commenting at this time,” said Long Trak, a spokesperson for the group.” “We will be holding a press conference later this week in which we will respond to this latest news. We will update you regarding the day, time and location.”

Meanwhile, a group called “Marpole students for modular housing” plans to hold a “new neighbour welcoming rally” Dec. 5 outside the property on Heather Street. A message on the group’s Facebook page indicates 60 people will attend, with another 328 interested.

“The purpose of this event is to create connections, exchange stories and, most of all, to show that we are ready to welcome those who will be moving into the modular housing!” the message said.

Onni Group agreed to have the housing remain on the property for at least five years before it proceeds with a 2,700-unit residential development, which will include 654 social housing units, with 114 of those connected to health and counselling services for tenants.

The modular project will be split into two buildings of 39 units each. Julie Roberts, executive director of Community Builders, told the Courier earlier this month that tenants will be a mix of people from shelters and the street.

Tenants will be 45 or older and many will have physical, medical and other disabilities. At least 14 of the units will be wheelchair accessible. Staff will be on site around the clock. Roberts said some tenants will likely have addiction and mental health issues.

“We use a tenant intake process that takes into consideration peoples’ housing history, their mental health issues, their substance abuse issues, their physical issues,” Roberts said. “So, it is in fact possible that people will have at this time or in the past had issues around that.”