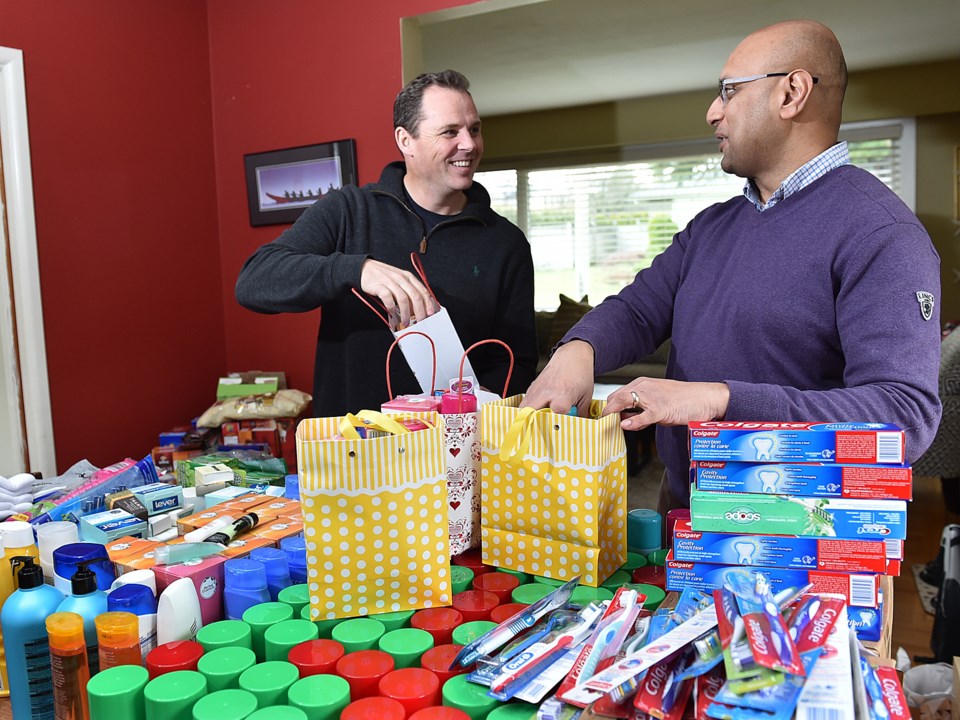 Paul Williams, a pastor at Granville Chapel, and Nizar Assanie are among Marpole residents who collected donations for residents moving into the Marpole modular housing complex. Photo Dan Toulgoet

But the goods aren’t for himself. Assanie, his neighbours, and members of church groups have collected the items in order to create welcome packages for the new residents of the Marpole modular housing complex under construction at West 59th and Heather Street.

On Friday evening, they’re gathering for a “packing party” to organize the donated items.

The 78-unit modular housing complex, which is being built to house some of the city’s homeless, is expected to open later this month. Last September, the provincial government earmarked $66 million towards 600 modular housing units in Vancouver, and the Marpole complex will be the first to be completed.

But the project has attracted both positive and negative reaction. Some residents have rallied in support of it, while others argue it’s too close to a school, there wasn’t enough consultation and there are safety concerns.

Assanie, who lives about five blocks from the site, said he wanted to take a positive approach. So did his neighbours, as well as members of West Side Baptist Church and Granville Chapel, who “from the very beginning thought [modular housing] was a positive initiative to tackle one of the biggest social issues that is facing the city,” he said.

They approached Community Builders, the non-profit association that will manage the complex, to ask for a list of what residents might need when they moved in. With the list in hand, the group had no problem collecting more than enough donations.

Even a small item such as shampoo is important to offer to residents, Assanie said.

Assanie also joined the community advisory committee for the Marpole complex, as did Paul Williams, a neighbour and one of the pastors from Granville Chapel, because they consider homelessness such an important issue to address.

When asked if he ever had concerns about the Marpole complex, Assanie said:

“You always have reservations, but I don’t think we’re fearful of it. You have people who have been homeless and some of them might have some issues with drugs and alcohol but that doesn’t mean we shouldn’t lend a helping hand.”

His advice to other neighbourhoods where modular housing for the homeless is being built is to keep an open mind, be aware the residents may have had a lot of trauma in their lives and try and help them make a positive change.

“I come from a country [Pakistan] where if you want to experience poverty, all you have to do is walk out your front door. And, some of the best people that I’ve met are people that don’t have anything,” he said. “So, rather than be quick at making judgments about people who you haven’t met, who may not be in the social class that you’re in, really keep an open heart and an open mind. Try to find out more about their stories and help them. In the process, we learn a lot more about ourselves than we would about others. That’s the approach that me and my family are taking and some of our neighbours as well.”