Earlier this month, Terry Slack, a fisherman for 65 years, was walking by the Fraser River waterfront near the corner of Hudson Street and West 77th Avenue when he noticed a two-storey wooden building that had once been used to repair ships, one that
Feb 25, 2013 2:00 AM By: Stanley Tromp 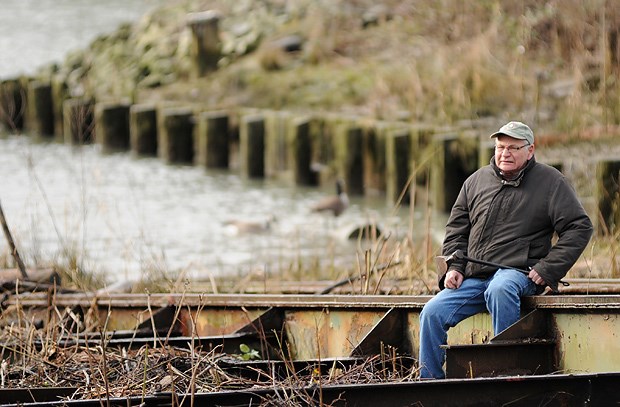 Terry Slack at the site of the demolished shipyard building in Marpole.Dan Toulgoet

Earlier this month, Terry Slack, a fisherman for 65 years, was walking by the Fraser River waterfront near the corner of Hudson Street and West 77th Avenue when he noticed a two-storey wooden building that had once been used to repair ships, one that he had seen for decades, was missing.

Today all one can see behind a fence sign reading No trespassing, violators will be prosecuted is torn-up bare earth. Although dating from about 1910, the building had not been placed on city halls heritage preservation list since the list was created in the mid-1980s. The landowners, Canfor Corporation forestry giant, had applied for a demolition permit last fall which the city issued.

Im concerned weve lost a lot of history in Marpole and the riverfront, said Slack. The building should have at least been photographed by the city, and artifacts

Despite repeated requests, Canfors vice-president of communications Christine Kennedy declined to say why the building was torn down, what will happen to the land, and if any historical artifacts came from the site. It is our board week, are extremely busy, and this is a low-priority item, she told the Courier.

Some confusion exists as to whether the Marpole lands south of Marine Drive are part of the recent Marpole community planning process.

The land south of Marine is zoned for industrial use, Shillito is quoted as saying. The city has no plans to change the zoning and there are no current applications for rezoning or development on the site. The site is within the Marpole community plan area, however the plan is not considering any changes to land use on the site as it is part of an important stock of industrial land within the city.

Slack and Claudia Laroye, director of the Marpole Business Association, believed the area was excluded from the Marpole planning process.

At the start of the planning process 18 months ago, we were told the south of Marine area wouldnt be part of the planning process, or even looked at, apart of getting public access to the waterfront and a public trail along the whole waterfront, which we much support, said Laroye. It has been a bit frustrating that even the economic development plan for that area has not been part of any discussion.