Matthieu Perreault walked back his harsh words for NHL Player Safety, but he's not entirely wrong 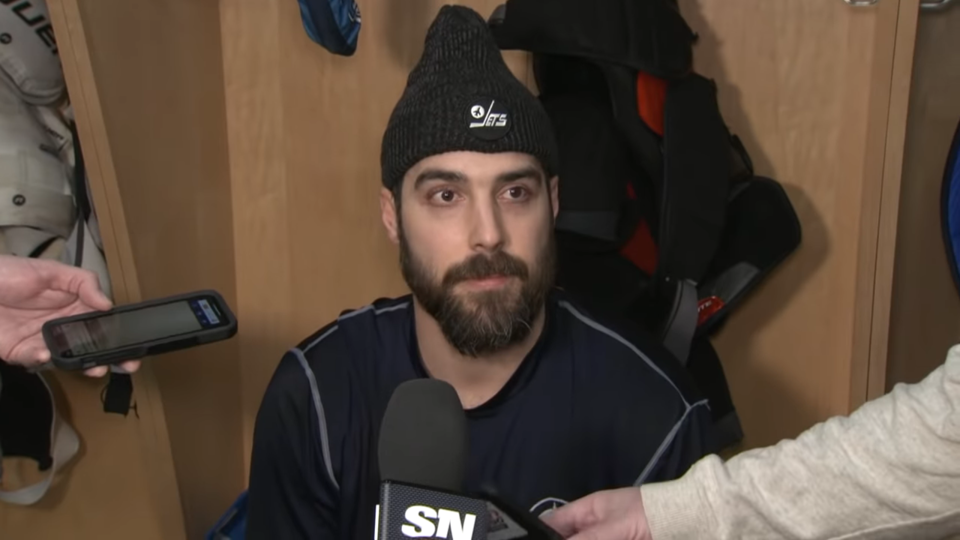 That was Mathieu Perreault of the Winnipeg Jets on Thursday when it became clear that no discipline would be assessed to Jake Virtanen for his elbow to Perreault’s head.

Virtanen’s elbow came in the first period of the Canucks’ game against the Jets on Tuesday. It was undoubtedly a cheap hit: the puck was long gone and Perreault never actually had possession of the puck, so it was certainly a late hit or interference.

What made it worse is that Virtanen, seemingly aware that he wasn’t going to make solid contact with Perreault, stuck out his elbow and popped Perreault in the jaw. It was a classic “chicken wing” hit, the type that made Shane Doan very unpopular among some NHL fanbases. Perhaps it wasn’t as egregious as a Doan elbow, but it was still pretty blatant.

That’s why it was surprising that it didn’t earn Virtanen a penalty on the ice. Perreault was apoplectic, shocked that there was no call and he chirped Virtanen on the bench that a suspension was surely coming.

Was it worthy of a suspension? Perhaps. It’s the type of unnecessary headshot that the NHL’s Department of Player Safety should be concerned about and, at the very least, should have spoken to Virtanen about the hit and levied a fine. While the outcome this time wasn’t too bad — Perreault, who has a history of concussions, escaped injury — it’s a hit that shouldn’t have happened and could have a worse result next time.

In other words, “Player safety, my ass.”

“This is literally an elbow to the face to a guy that didn’t have the puck,” continued Perreault to reporters. “They’re not going to do anything about it, so I’ve got to take matters into my own hands next time this happens, and I get to swing my stick across his forehead and I shouldn’t get suspended.”

That’s the reaction you get when the league doesn’t protect its players. The players feel they need to protect themselves and that just leads to an escalation of violence. For a smaller player like Perreault, he feels like all he can do is use his stick to do so.

“The only thing I can do defend myself is use my stick,” added Perreault, “so next guy that does that to me is going to get my f***ing stick and I better not get suspended for it.”

On Friday, Perreault walked back his comments, perhaps because the one thing the Department of Player Safety does seem to take seriously is stick-swinging incidents.

“First of all, I'd like to say my emotion got a little high there," said Perreault to reporters. "I obviously wouldn't slash anybody in the face. That's not who I am, I've never done anything like that in my career.”

Before proclaiming Perreault as a clean soul, let’s remember that he’s also the guy who knocked Jannik Hansen out of the lineup for weeks back in 2016 with a late knee-on-knee hit. It’s not a slash to the face, but it’s not pretty either.

In any case, the larger issue is that players that don’t feel protected by the league will take matters into their own hands. The Department of Player Safety doesn’t seem to be dissuading players from pursuing that retribution, which will, in turn, make the game more dangerous.

Virtanen certainly doesn’t seem to feel like he did anything wrong. When reporters asked about Perreault’s comments, he had a big smile on his face.

“It could have been a lot worse if I really hit him,” said Virtanen. “I honestly didn’t even mean to do that.”

The issue is, he did do that. He did elbow him in the face.

“It’s hockey. Stuff’s going to happen,” he added. “It’s not going to be flowers and roses all the time, where everything’s clean.”

It’s true. With the speed of the game, there will always be the possibility for danger and injuries. What you can do, however, is reduce the risk by teaching players how to avoid hitting other players in the head with an unnecessary chicken-wing elbow.