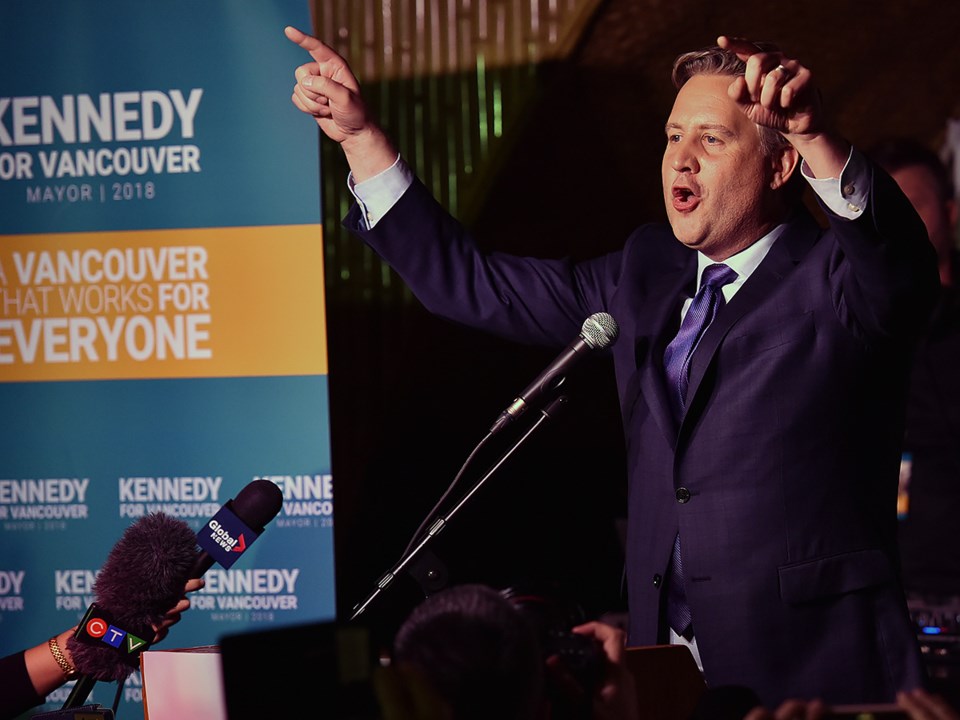 After giving Gregor Robertson and his Vision Vancouver team three consecutive majorities at city hall, voters chose Saturday to have a former Burnaby NDP MP lead the city for the next four years.

The 51-year-old Kennedy Stewart, who ran as a union-backed independent candidate, scored a narrow victory in collecting 49,812 votes to the 48,828 that went to his closest challenger, the NPA’s Ken Sim.

It was a difference of 984 votes, with Stewart garnering 28.72 per cent of the vote to Sim's 28.15, according to unofficial results posted well after midnight on the City of Vancouver’s website.

“Was that close enough for you, or what?” said Stewart from the Waldorf Hotel on East Hastings, where a crowd that included union leaders and former provincial and federal NDP politicians chanted “Ken-ne-dy!, Ken-ne-dy!”

Shauna Sylvester, who accused Stewart during the campaign of potentially splitting the so-called progressive vote because of his entry into the race after she first declared her candidacy as an independent, finished the night with 35,537 votes and 20.49 per cent of the vote.

Wai Young of Coalition Vancouver (11,886 votes) and Hector Bremner of Yes Vancouver (9,940), who both earlier this year had interest in becoming the NPA’s mayoral candidate, finished fourth and fifth respectively.

Stewart replaces the retiring Robertson, whose party lost its 10-year grip on city hall by losing its majority—none of its candidates were elected—and almost returning it to the NPA, which won five seats Saturday.

With no one party with a majority of the 10 council seats, it signals a new and unpredictable era of civic discourse at city hall with the progressives holding the balance of power.

The Greens gained some negotiating ground with the re-election of Adriane Carr, who topped the polls, and the addition of running mates Pete Fry and Michael Wiebe.

The other council seats went to Jean Swanson of COPE and Christine Boyle of OneCity, the party’s first representative on a council that will be dominated by women.

The political makeup of council leaves Stewart in charge of a disparate group of councillors from both sides of the political spectrum, but each with a stated desire to find solutions to the city’s affordable housing crisis.

His oft-repeated answer during the campaign to that consensus-building challenge related to his seven years as an MP in Ottawa, where he said he worked across party lines.

“There was this joke in Parliament that I was the most popular MP in all parties but my own because I cooperated so much with other parties,” he told reporters earlier this week at a news conference outside city hall.

Stewart used a term borrowed from NDP MP Nathan Cullen to explain what he envisioned would play out in a mixed council —“furious agreement”— and said his parliamentary experience would help push policy forward.

Stewart’s test as a leader with this group will be whether he can implement his ambitious agenda to build 85,000 homes over the next 10 years, which is a 13,000 increase over the current plan adopted by the previous Vision administration.

Of those 85,000 homes, Stewart promised 25,000 non-profit “affordable” rental homes will be built on city land in the next decade. The homes are to be geared to households earning under $80,000 per year.

His plan also calls for the construction of 35,000 new condominiums, coach houses and townhouses and 25,000 purpose-built rental apartments and laneway homes.

Other measures under Stewart’s four-year term include opening a “renters’ advocate” office, tripling the empty homes tax and protecting “between one-third and one half” of all new homes from speculation.

During the campaign, opponents accused him of ignoring the demolition of hundreds of units of older rental buildings in the Metrotown area of Burnaby to make way for expensive condos, effectively displacing tenants.

Stewart responded to that accusation last month at the Courier-Business-In-Vancouver-Vancouver-Is-Awesome mayoral debate, saying he was first elected as an MP in 2011 in north Burnaby.

“Metrotown is not in the riding [where the demolitions were occurring],” he told the audience, adding that the top issue for his constituents at the time was fighting Kinder Morgan’s TransMountain pipeline proposal. “So I worked my guts out to stop that pipeline because that’s what my constituents wanted.”

In 2015, the boundaries of his riding changed.

“I moved to south Burnaby and immediately got to work and saved hundreds of co-op units—hundreds of them,” he said. “And I’ve got letters on my desk thanking me for that. So I feel fine about my record.”

In March of this year, Stewart was arrested for defying a court order related to Kinder Morgan’s Trans Mountain pipeline project on Burnaby mountain.

In the latter part of the campaign, Stewart found himself defending election rules that allowed the Vancouver and District Labour Council to endorse him and 26 other candidates, including councillor-elects Carr, Fry, Wiebe and Boyle, who celebrated Stewart’s victory at the Waldorf Hotel.

The endorsement came with a campaign that saw the VDLC spend money on flyers, social media advertising and staff to get Stewart and a progressive slate elected.

Stewart’s opponents argued he wasn’t respecting the spirit of the new rules, which banned corporate and union donations. The VDLC seconded four members of unions to work on the council’s campaign, targeting the 50,000 union members who live in Vancouver.

The Breaker online news source revealed during the campaign that CUPE Local 15 circulated a memo to workers saying they would be reimbursed if they took time off work to help campaign for union-backed candidates.

Municipal Affairs Minister Selina Robinson has promised to review the rules after the election, which Stewart said he supported. In exchanges about his union links, Stewart often pointed to his regular disclosure of campaign donations and challenged other candidates to do the same.

The NPA eventually disclosed the names of its donors and how much they contributed, releasing a list Oct. 9 showing the party raised $837,207 from 4,400 donors—the most of any party.

As of Oct. 9, Stewart’s campaign raised $192,253 from 1,459 donors. Regular disclosures are what he plans to do as mayor and he promised to create a lobbyist registry and implement conflict of interest rules for politicians and staff.

Despite resigning last month as an MP, Stewart did not distance himself from his affiliation with the NDP, even though he launched his run in May as an independent candidate.

It was a contradiction that Sylvester pointed out several times, calling Stewart “an NDP mayoral candidate” during debates and interviews, and arguing she was the only true independent candidate. She said Saturday night that Stewart had her full support in "leading this city I love."

"You are assuming the role at an unprecedented and challenging time," she said from the Ironworks event space in Railtown. "You will need the support of all of us in this room to move this city to hear, respect and serve our fellow citizens."

Stewart’s campaign signs were initially coloured black and white and eventually changed to the blue and orange colours of the NDP—the same colours on his website. He also wore an orange “Kennedy for Vancouver” button on his jacket.

Harcourt was the city’s last independent mayor, having been elected in 1980. His victory came after the VDLC forged an informal coalition between him and COPE.

Stewart’s NDP roots should benefit his relationship with the NDP-led provincial government, particularly on housing. Robertson, a former NDP MLA, praised the government last year for providing $60 million for the construction of 600 units of temporary modular housing in Vancouver.

Aside from the housing file, Stewart inherits the opioid crisis portfolio from Robertson, who pushed for decriminalization and a clean supply of drugs for severely addicted users, which Stewart supports. Stewart has promised to create an “emergency task force” in the Downtown Eastside and look to renegotiate the Vancouver Agreement with the provincial and federal governments.

He’s also committed to reviewing all policies and taxes related to small businesses to “help support and grow neighbourhood-based economies.”

In a scrum following his victory speech, Stewart said he wanted to get to a place in Vancouver where housing no longer dominates conversations.

"I travelled back and forth to Ottawa a lot in the last seven years," he told reporters. "In Ottawa, they don't talk about housing. That's all we talk about here, and we've got to stop that, we've got to get this [housing crisis] under control and then we can talk about other things."

Stewart has lived in Vancouver for the last three years, but originally came to the city in the late 1980s from Nova Scotia to pursue a career as a musician.

He later went on to a career in political science at Simon Fraser University, where he has been on leave as a professor of public policy since being elected as an MP in 2011.

Stewart rents an apartment downtown with his wife, Jeanette, who teaches political science at Douglas College. Asked at his launch how much he pays for rent, he said: “Too much, just like everybody else.”

Stewart and the new council will be sworn in Nov. 5.