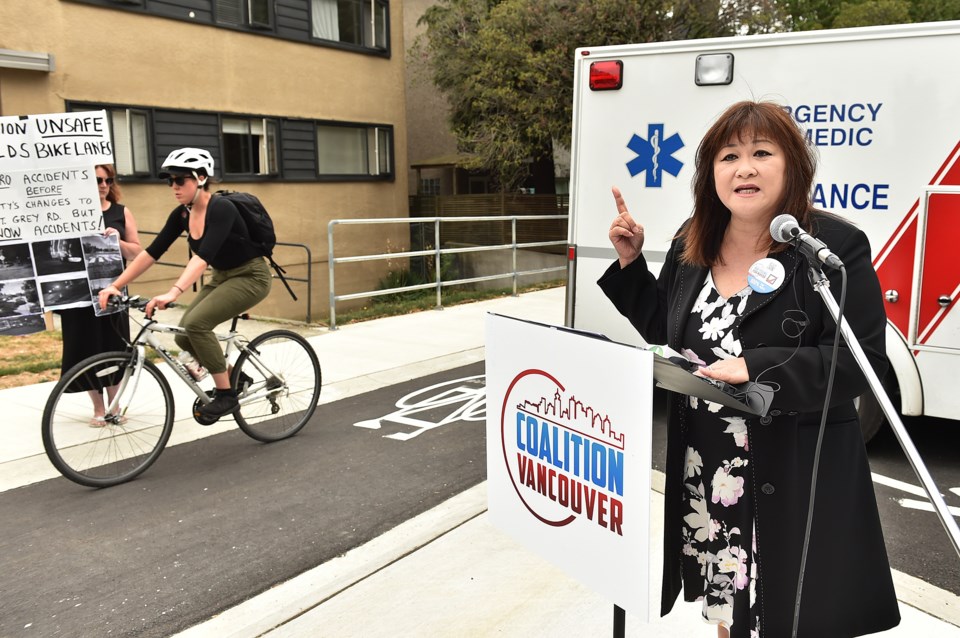 Coalition Vancouver mayoral candidate Wai Young promised Wednesday to re-train 50 per cent of the city’s parking enforcement officers so they can hand out tickets to cyclists, pedestrians and motorists who break the law.

The promise is part of a policy proposal Young has dubbed “mutual respect.”

“The goal, after a period of adjustment, is to ticket no one,” she said, standing on a stretch of newly designed roadway on 10th Avenue that includes separated bike lanes. “The goal is for Vancouver to be a city with mutual respect, with residents who know and respect the rules which keep people safe.”

She pointed to cyclists riding on sidewalks, pedestrians walking against crossing lights and motorists who impede traffic “through poor driving skills or clearly endanger pedestrians or cyclists by not following the rules.”

Young’s speech, however, was heavily weighted on scrapping the recent 10th Avenue bike route improvements, a promise she made in launching her campaign last month. The stretch of new bike lanes, which were built alongside new sidewalks and roadway, run from Willow to Oak streets and cost $4.5 million.

Young wants parking spots returned to the stretch of road to allow for better access to patients of Vancouver General Hospital, its emergency department and other health care services on West 10th Avenue. She said cyclists already have designated cycling routes on Seventh Avenue and 14th Avenue.

The city has said it redeveloped the roadway to make the stretch safer for cyclists, pedestrians and motorists along the popular cycling route, which was busy with all three modes of transportation when Young delivered her speech.

The Courier watched as some pedestrians crossing the street had close calls with cyclists travelling at various speeds. Cars wanting to access the hospital’s emergency department also had to yield to cyclists, as a posted sign outside the entrance demanded.

“This bike lane has been installed at considerable taxpayer cost and over the objections of thousands of residents who spoke up and spoke out against this ridiculous location,” she said, as an ambulance backed up behind her across a portion of a bike lane to respond to an emergency call at an apartment. “But did city hall listen? No, they are intent—as they have shown us for the last 10 years—to continue spending our tax dollars on two per cent of people who cycle to continue their ideological war on transportation.”

Cyclist Carol Logan, who stopped her bicycle in the eastbound bike lane to answer questions from the Courier, said she disagreed with Young’s call to scrap the new bike lanes. Logan said she didn’t feel safe riding the stretch prior to the separated lanes being built.

“I don’t support that,” she said, pointing to the success of Portland’s bike routes and the positive effect on that Oregon city. “We’re going backwards. We’re not evolving, we’re devolving with a decision like that.”

Logan said she doesn’t have a car and will walk, take transit or use her bike to get around the city.

Her only complaint about the 10th Avenue bike route between Oak and Cambie is that it doesn’t continue for the whole stretch; the section running east from Willow to Ash streets doesn’t have separated bike lanes, while the one-block stretch from Ash to Cambie has become a one-way for vehicles, but open both ways for cyclists.

Curt Moon was returning from an appointment at the Blusson Spinal Cord Centre on 10th Avenue when approached by the Courier at Laurel Street. He said he parked on the fifth level of a nearby parkade, noting in his first visit to the centre he could find parking on the street.

“We have a lot of bike lanes, why does this one have to be right here in front of the hospital?” he said, agreeing with concerned health workers that it should be a free flow of traffic along the road to allow vehicles to easily access the emergency department and other facilities. “If you have to come for an appointment like me, I’m not going to ride my bicycle here.”