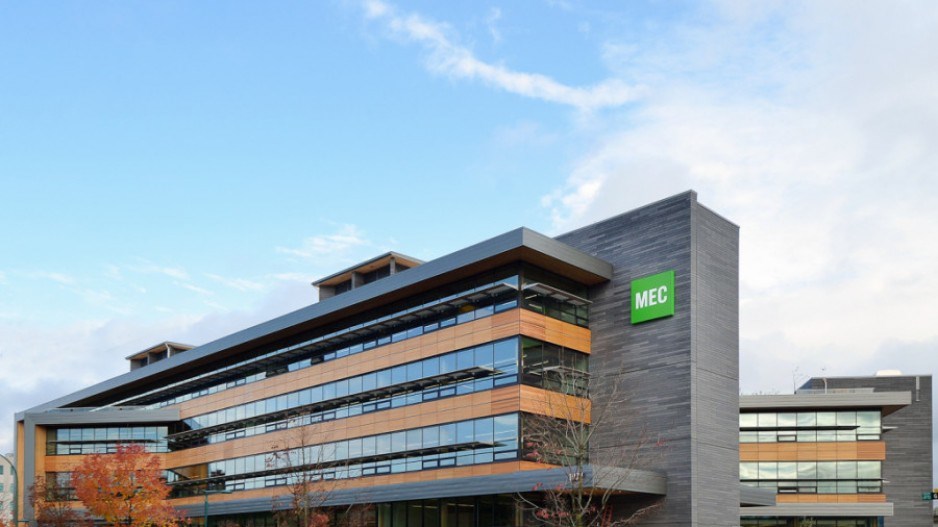 Vancouver-based outdoor equipment retailer MEC announced today that it plans to sublease its 112,000-square-foot head office on Great Northern Way, which it built for $28 million and moved into in late-2014.

The company has already started scouting the market for a new headquarters that will be about one-third the size and be somewhere in Metro Vancouver, CEO Phil Arrata told Business in Vancouver.

Arrata said that the sublease and new head office will save the company millions of dollars annually — “far less than 10 million, maybe a couple million.”

The 22-store, 2,400-employee retailer, which manufactures about 20 per cent of its products, has struggled financially, losing $11.5 million in its 2018-19 fiscal year, which ended in February.

Arrata would not speculate on how much money the company will lose in its current fiscal year, although he hinted that losses could exceed those of last year. His aim is to get the company to be cash-flow positive in the 2020-21 fiscal year, he said.

One reason that the current fiscal year could be worse than last year is that MEC sold real estate in the 2018-19 fiscal year and booked a one-time capital gain. No such transactions took place this year, he said.

One real estate transaction is on the horizon, but it is just a move and not a property sale.

MEC plans to move its longtime flagship store at 130 West Broadway to a newly built store at 101 East Second Ave., near Quebec Street.

That store is likely to open in March or April.

Arrata, who has been on the job for six months, has methodically examined every aspect of the business in search for efficiencies, and strategized on how to increase sales and profit.

One significant initiative was to convert more than 950 casual and non-permanent workers into being permanent full-time or part-time staff entitled to benefits.

That change means those employees will receive extended health and dental coverage, tuition assistance, an RRSP-matching plan and maternity and paternity leave top-ups.

How does paying for more generous benefits for workers help the balance sheet?

For one thing, turnover will be less, Arrata said.

He explained that turnover for non-permanent workers has been in the 80% range, whereas permanent staff turns over at an 18 per cent rate annually.

Ending the system of non-permanent workers is therefore likely to help retain workers, reduce training costs and provide customers with more knowledgeable sales staff. The result of that, Arrata said, should be increased sales and therefore more profit.

Another of his changes will be to the line of MEC-branded products that the company manufactures. Arrata believes that MEC makes too many different products. Many of its self-made products fail to sell well, forcing MEC to discount or otherwise liquidate them, he said.

“We’re looking at more depth versus breadth,” he said. Some MEC-branded products — such as so-called toaster suits, or kids’ onesies — sell so well that they are often out of stock, so resources should be put toward ramping up production of those items, he explained.

Another change is that some stores will also get fewer, but larger, deliveries in an attempt to reduce work, cut delivery costs and reduce the company’s carbon footprint, he said.

“We’ve gone back and looked at technology contracts,” he said. “Are we buying the right technology services in the right quantity, and at the right price? We might have had services we signed up for that we weren’t using, or cases where we had too many licenses for the number of users. Those are some tactical examples of how we’ve been going through our cost structure to find efficiencies.”