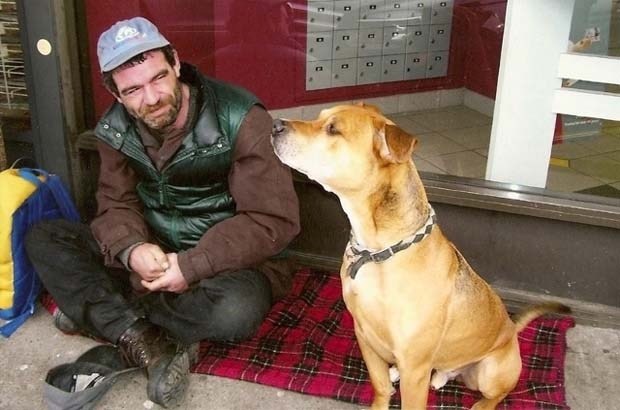 Rick Hofs didn't leave much: a backpack, a pair of boots, a leather jacket, nail clippers, a pen, a ruler, a pocket knife. Other belongings included a discharge paper from the hospital, a wallet with a bit of cash in it and one of those walkers the elderly use for balance.

It was the sight of the walker, adorned with a single Christmas ornament, that deflated his younger and only sibling, Louise Wilson.

Her brother was 49, not 79. The fact he died Dec. 27 a frail homeless man behind a Marpole dollar store still doesn't compute with Wilson. Not when she studies the photographs she kept of her once sturdy brother.

The oldest image is of a fit 19-year-old in a striped V-neck shirt and jeans. He's sitting on a sofa with one of the family dogs at his feet. He's got a full head of hair, a thick moustache and he's smiling.

At 27, he's in a muscle shirt and looks relaxed at a summer gathering in his parents' backyard in Chilliwack. Same smile in that photo, too.

Four years later at 31, he's in dress pants, a shirt and tie. His hands are in his pockets and he's posing in front of a fireplace. This time, he's got a confident grin.

The story connecting the images goes like this: A likeable young man grows up in Steveston. He has many friends. He has a steady girlfriend. He has a passion for restoring Dodge muscle cars. He becomes a skilled carpenter.

So how is it that Rick Hofs got so low?

It's a question Wilson, who is two years younger than her brother, doesn't have a complete answer to. She doesn't know that she ever will. She's been trying, though.

Since she received news of her brother's death from a police officer, Wilson reached out to many in Marpole who knew Hofs as the homeless guy with the dog at 70 th and Granville.

"I always hoped that he was married somewhere and he had a life," she said by telephone from her Langley home. "To hear he was homeless was hard. And having to identify his body was the most horrible thing I've ever had to do."

Hofs showed up unannounced at her house in Langley. He owned an old camper van at the time and had his pit bull cross Bandit with him.

"He looked very rough and he basically said I'll call you in a bit and he was on his way to Vancouver," she recalled. "He had everything packed in his van and he left."

Wilson expected to hear from him again. Faithfully, every year, he would call her in April on her birthday. Those calls stopped.

She heard stories about him that worried her. She searched out his old friends and understood from one that Hofs was in Vancouver and doing fine.

Then she learned he was to appear in court. She didn't know what for. She showed up several times at the Main Street courthouse but never found him.

Married with three children, she didn't want to probe too deeply into her brother's life because of what she described as "circumstances." Wilson believed her brother was once caught up in a dangerous drug scene, although he never confided in her about his choices in life.

She doubted he shared any of his troubles with their parents, either. Her father died in 2007, her mother lives in Chilliwack and wants nothing to do with her "hobo" son's funeral, according to Wilson, who, like her brother, was adopted and didn't have an ideal relationship with her parents.

Stories going around Marpole that Hofs was once married and had a child are hard to believe for Wilson. She'd like to think that was the case, but she has no proof. She knows her brother had a girlfriend when he was in his 20s but she left after a few years. The breakup crushed him.

Now divorced, Wilson purposely kept the same phone number and remained in the same house in Langley, hoping her brother would call or drop in.

"He knew where I was," said Wilson, who works as a credit administrator at a home improvement store. "At any point, he could have picked up the phone and I would have come and got him. As long as he was clean and away from that stuff, he would have had a home with me."

Wilson learned more about her brother last Thursday after 80 people attended a memorial for Hofs at Marpole Place on 70 th Avenue.

Single moms, seniors, the homeless, young kids, the disabled, a letter carrier, a pastor, the owner of the dollar store where he died and various people of ethnic backgrounds packed the small space. They shared stories, sang songs, laughed and cried over the better part of an hour as Wilson, dressed in black, sat on a piano bench at the front of the room to take it all in.

Two of her adult daughters were there, too, driven to tears like their mom, who was clearly moved by the outpouring of friendship from the guests.

Build a transition house in Marpole for homeless people and name it after Hofs, said Nikita Williams, who likened the homeless man to a father.

Put up a plaque in his memory outside the dollar store, said Lelan Shaffer, who started a shrine outside Amy's Loonie Toonie Town after learning of his friend's death.

"If you look around this room today, each one of us has a different story about Rick," said Heather Pieters, sharing how Hofs looked out for her two teenaged boys. "The fact is one person changed Marpole for many of us. We should remember that as we step outside these doors today - a homeless person actually touched our lives."

One man attempted to sing the old standard "I believe," which begins with the lyrics "I believe for every drop of rain that falls, a flower grows. I believe that somewhere in the darkest night, a candle glows."

Click here to see more photos from the ceremony.