All stores selling recreational marijuana must get provincial and municipal approval
Oct 29, 2018 12:43 PM By: Glen Korstrom 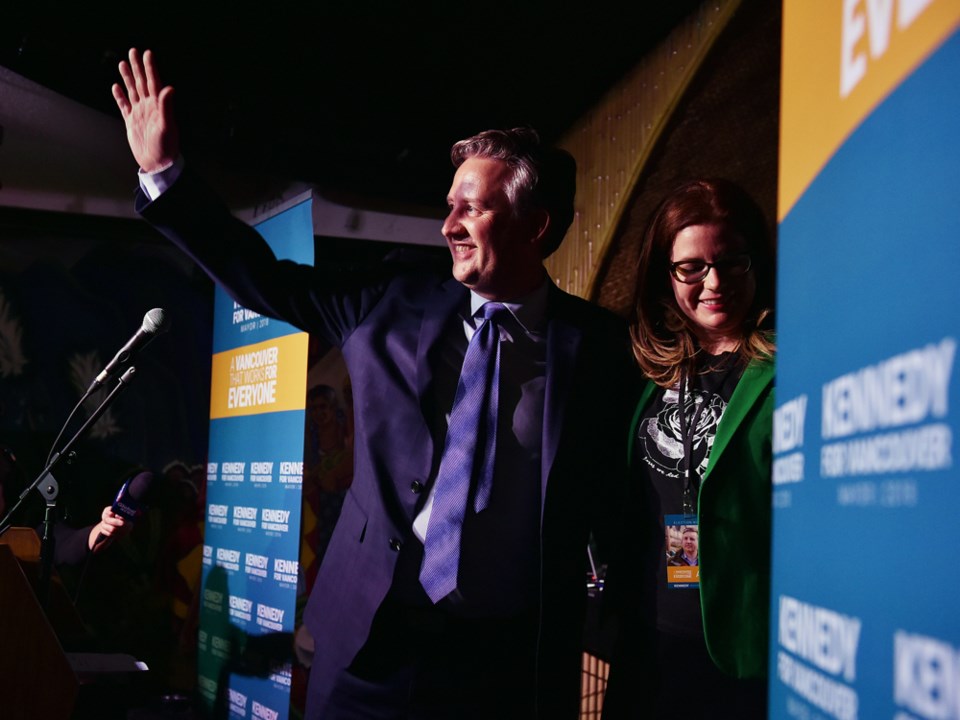 Vancouver’s mayor-elect Kennedy Stewart said after his victory that the 19 cannabis dispensaries that the city licensed prior to federal legalization should be given priority in future city licensing. Photo Dan Toulgoet

Elections in 21 municipalities across Metro Vancouver have lined up 16 new mayors and have clarified retail sales rules for cannabis around the region.

The B.C. government requires all potential cannabis store operators — government or private — to get municipal approval before opening.

People in all B.C. communities will be able to buy weed from the government’s online store.

Surrey is one of the cities where the previous council had not taken a clear stance on whether it would license any cannabis stores to operate.

Incoming Surrey mayor Doug McCallum, however, made clear during the campaign that he opposes licensing cannabis stores in his community. Given that McCallum’s Safe Surrey Coalition took seven of eight city council seats, a ban on pot stores in the city seems likely.

Cities such as Richmond and West Vancouver had previous councils that opposed allowing cannabis stores to operate, and neither of those cities elected enough supporters of pot sales to overturn that opposition.

The City of Richmond’s previous council was possibly the most opposed to cannabis retailing of all B.C. municipal councils. Not only did it unanimously prohibit retail cannabis stores in the community, it also unanimously supported writing to the federal and provincial governments to outline opposition to the concept of legalizing cannabis.

Richmond Mayor Malcolm Brodie easily won re-election, indicating that little change is in store. Some cracks in Richmond’s opposition to cannabis stores, however, may be forming in its eight-member council. New councillor Kelly Greene said during the campaign that she supports having cannabis stores in Richmond and would like to regulate them to ensure that they do not stay open late and are not located near schools. Re-elected councillor Harold Steves sounded as though his opposition to such stores was waning when he said on Twitter on Oct. 19 that he prefers government-run cannabis stores to private ones.

The City of West Vancouver’s council voted unanimously to ban cannabis retailers from applying to operate in the community without first having a rezoning hearing.

Incoming West Vancouver mayor Mary-Ann Booth, who won by a 21-vote margin, was on the previous council and is likely to take a status quo position on cannabis retailing.

Most of West Vancouver’s previous council was also re-elected, making it even more likely that previous city policy will continue.

Some of the other Metro Vancouver municipalities that have new mayors have policies to restrict cannabis store proliferation.

In the city of North Vancouver, two-term councillor Linda Buchanan became mayor. She voted with a majority of councillors earlier this year to restrict the number of cannabis stores in her community to six. North Vancouver also requires all potential licensees to not have operated illegal cannabis dispensaries after legalization kicked in on Oct. 17.

That dictum prompted six of the seven dispensaries operating in North Vancouver to permanently close on October 16.

The city of Burnaby voted for a break from the past when residents rejected Mayor Derek Corrigan, who has held the top job on council since 2002.

Hurley said during the campaign that he wants the rollout of retail stores to be gradual and for pot smoking to be allowed anywhere cigarette smoking is permitted.

The largest city in the region, the city of Vancouver, has many dispensaries that continue to operate illegally.

Incoming mayor Kennedy Stewart said after his victory that the 19 cannabis dispensaries that the city licensed prior to federal legalization should be given priority in future city licensing.