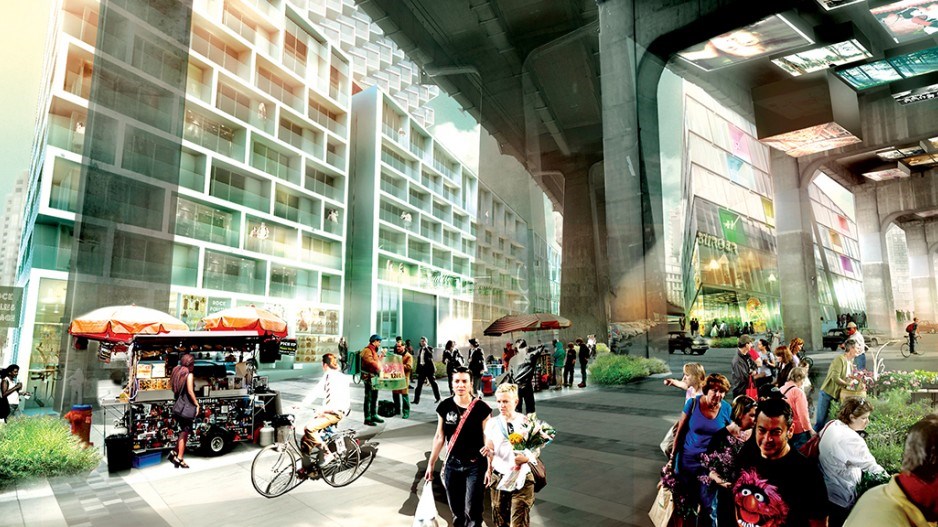 Westbank is adding an 80,000-square-foot retail village beneath its Vancouver House condo tower at the north end of the Granville Street Bridge that will include Vancouver’s first Fresh St. Market and at least three restaurants. Image submitted

Despite a recent U.S. report claiming “retail is dead,” bricks-and-mortar shopping is thriving in Metro Vancouver with approximately 3.8 million square feet planned or under development and property sales of $450 million so far this year.

“Retail is dead,” the survey concludes, noting “consumers are shunning bricks-and-mortar this holiday season with over 95 per cent choosing to buy half or more of their gifts online.”

Vancouver, McAllister noted, is playing catch-up on shopping space because it has a relative shortage of shopping venues. This is in spite of Metro Vancouver posting an average of $3.3 billion in monthly retail sales in 2019, third highest in Canada.

Metro Vancouver has 11.6 square feet of shopping centre retail space per capita, according to a 2018 Altus Group study, compared with 18 in Calgary, 19.5 in Edmonton and a national average of 13.1 square feet per capita.

McAllister said online sales are a challenge to bricks-and-mortar retail, but not all retailers are affected.

“Bad retail is vulnerable,” he said, pointing to large traditional department stores “like Sears” and those located in areas that lack parking or transit “such as South Granville,” which has seen a number of retail stores close in the past 12 months.

This year the nearly four million square feet of new retail development being built or planned in Metro Vancouver includes a 150,000-square-foot addition to the McArthurGlen Designer Outlet mall in Richmond, 1.4 million square feet underway at the City of Lougheed on the Burnaby-Coquitlam border that is expected to be completed in 2020’s first quarter and an 80,000-square-foot shopping mall being wedged beneath the Vancouver House condo tower at the north end of the Granville Street Bridge.

As well, 105 retail properties changed hands this year, worth $454 million, Lee & Associates reports. They included a Chilliwack shopping mall that sold for $87.4 million and an 11,000-square-foot retail site on South Granville that sold for $1,265 per square foot.

It is no coincidence that most of the dozen new or expanding retail plays in Metro Vancouver are neighbourhood shopping centres with a lifestyle component.

Grocery stores and other “needs of life” retailers are proving nearly immune to online competition, according to a November GWL Realty Advisors study, which notes that food-anchored neighbourhood shopping centres are now among Canada’s top-performing retail platforms.

Metro Vancouver retail is not dead, McAllister said; it is simply evolving.