Michael Matheson should be suspended for hit on Elias Pettersson

It didn’t take long for Elias Pettersson to suffer the first injury of his NHL career, but it had little to do with his lack of size.
Oct 13, 2018 8:20 PM By: Daniel Wagner 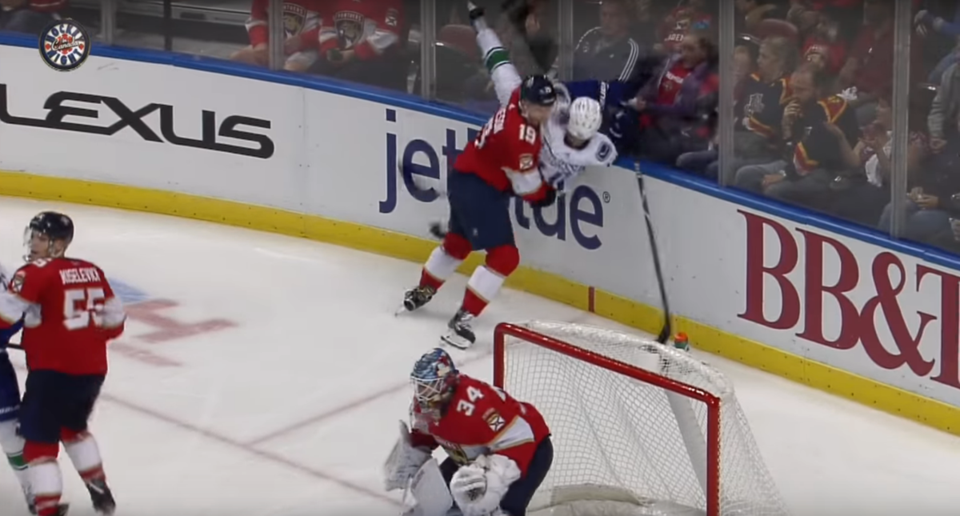 It didn’t take long for Elias Pettersson to suffer the first injury of his NHL career, but it had little to do with his lack of size. Instead, it came as a result of a predatory cheap shot that should see Florida Panthers’ defenceman Michael Matheson get a call from the NHL’s Department of Player Safety.

Pettersson had already made his mark on the game, scoring his fifth goal of the season on another gorgeous wrist shot. He was threatening to do more as well, before Matheson took it upon himself to end his night early.

Matheson, on the other hand, was having a rough game. Pettersson’s goal came with Matheson on the ice killing the penalty and Matheson was unable to block the shot. He also took a penalty earlier in the game on Nikolay Goldobin after the young winger slipped away from him off a faceoff.

Pettersson added to Matheson's troubles with a typically slippery deke and you could argue that Matheson's cheap shot came as a direct response to being utterly embarrassed by the Swedish centre. Pettersson’s quick spin move sent Matheson skittering to the ice and it’s easy to see why Matheson might have wanted to respond.

Pettersson broke Matheson's ankle with a deke and so like all good hockey men, Mathesson got embarrassed and took it out on Dekey Pete with a rough hit pic.twitter.com/M6jUBXnM3r

He took that response too far.

Stapling Pettersson to the boards with a solid check isn’t an issue. Pettersson had the puck and the hit itself wasn’t particularly egregious. It’s everything that happened after the puck was gone that is the issue.

Here is a slow motion of the Matheson/Pettersson hit as it will be the most talked about clip of the game. pic.twitter.com/5HTGEVVpED

It started with Matheson’s stick going between Pettersson’s legs. That prevented Pettersson from protecting himself, as the can opener kept him from getting his legs underneath himself. Then Matheson followed through and slammed Pettersson hard to the ice.

It bore a strong resemblance to a chokeslam like you would see in professional wrestling. Pettersson’s head seemed to whiplash to the side and impact the ice. He stayed down for a while, then looked woozy when he finally got up.

and he puts Pettersson in a daze. #Canucks pic.twitter.com/lcvMIYcYX2

It was hard to watch.

Somehow, Matheson didn’t even receive a penalty on the play, though the obvious call was a two-minute minor for roughing. There’s a difference between finishing your check and trying to send a message.

When you add in the context of Matheson responding directly to being embarrassed, it starts to look a lot more like intent to injure than just a simple penalty call.

That’s the kind of unnecessary follow-through that would get flagged and fined in the NFL, let alone in the NHL, and it led to one of the best young stars in the game getting injured. Pettersson could potentially have a concussion, but that kind of action can also lead to bad shoulder injuries or even broken collarbones.

While the Canucks’ only response on the ice was to score the game-winning goal the next time Matheson stepped off the bench, there needs to be a response from the NHL. It was dangerous, reckless, and quite possibly an intent to injure. There's no doubt in my mind that Matheson deserves a suspension.

Been told the play is going to be reviewed by the league. https://t.co/V0CIh9L6q0