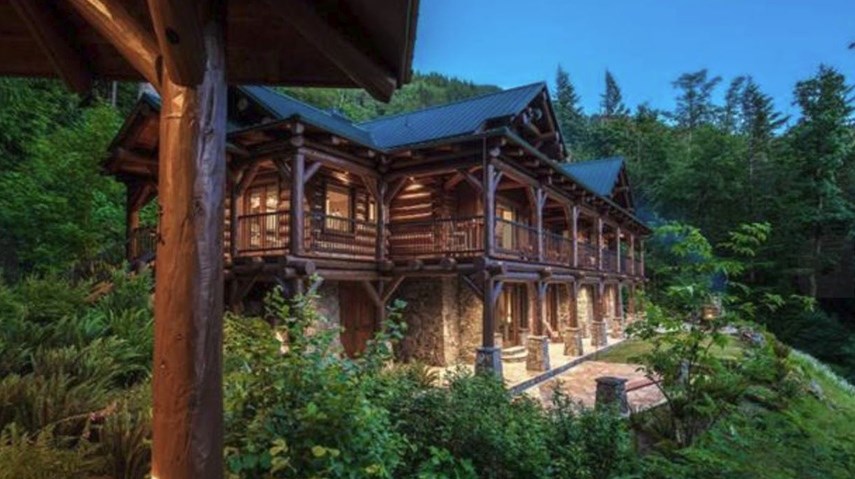 This log-cabin-style house sits on a jaw-dropping 360 acres of remote BC forested coastline, and is rumoured to belong to Hollywood A-list couple Michelle Pfeiffer and David E Kelley — Photo: Multiple Listing Service

A $28.8 million, 340-acre estate property in a remote area of BC’s coastline that is rumoured to belong to movie star Michelle Pfeiffer and her TV producer husband David E Kelley was the highest-priced new listing of last week, September 25 to October 1, on the Real Estate Board of Greater Vancouver’s Multiple Listing Service®.

The owner is listed on public land title records as 1 Wilderness Realty Inc., a small Los Angeles-based real estate management company that applied to the province for moorage at the site in 2006.

The jaw-dropping log-and-stone cabin-style house, which was built in 2007 as a “sanctuary” and had more than $35 million dollars spent on it, is located at the mouth of Bute Inlet. Neither of the co-listing agents was able to comment on the family behind the property’s ownership.

The reason the listing has no postal code is that this remote area doesn’t have one – the bluff-top estate is located approximately 100km north of Powell River on the BC mainland coast, opposite Sonora Island, and accessible only by boat. Fortunately, the resort-style waterfront property has its own deep-water cove and private docks, in addition to a trout-rich lake.

With a surprisingly few three bedrooms, there are nevertheless many rooms in the 3,979-square-foot home, which boasts massive cathedral ceilings in the living areas, plus a recreation room and a loft. It was listed on October 26 for $28.8 million.

However, that price makes it only the third most-expensive current listing on the REBGV’s MLS® as of October 5, beaten out by a luxury Shaughnessy mansion and a Southlands estate, listed for $34.8 million and $29.8 million respectively. (The former held the temporary honour of being Canada’s most expensive listing before a $35 million Toronto mansion usurped it.)

The median price of a detached home across the Greater Vancouver region crept up again last week, to $2,090,000 – although it’s around a million bucks more than that in Vancouver proper.

At 1,148 new units coming on stream last week, September 25 to October 1, this is lower than the previous week’s new listings but caps off a strong month for new inventory in September. Total listings as of October 5 now stand at a healthy 9,336 homes for sale in the Greater Vancouver region. However, the number of listing price reductions increased once more, to 442 price drops during that same week.

Joannah Connolly is the editor of REW.ca, where you can read more Vancouver real estate news.