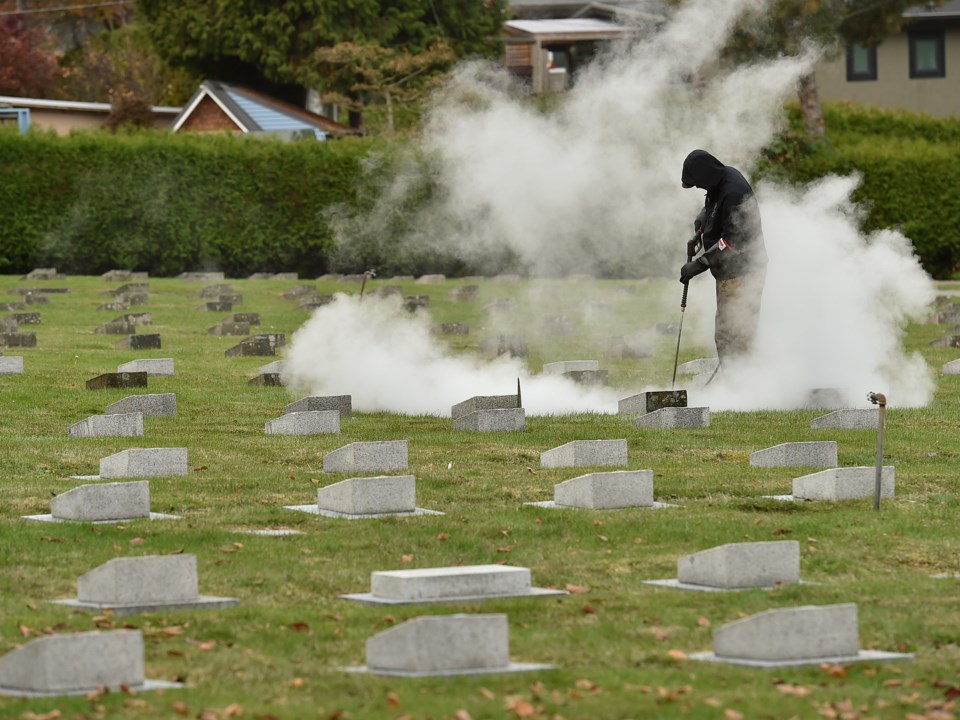 A massive $2.7 million project to install new foundations for veterans' graves and restore more than 7,300 military markers at Vancouver’s Mountain View Cemetery will go before city council next week for approval.

The cemetery, which runs over several city blocks adjacent to Fraser Street between East 43rd and East 31st avenues, is the final resting place of more than 12,000 veterans.

The cemetery is one of the largest military burial sites in Canada, with most of the service men and women buried in four military “Fields of Honour:” Jones 45, Abray North, Abray South and Horne2.

More than 1,900 markers were restored in the Abray South section between 2006 and 2011 and staff’s recommendation is to complete another 7,373 markers in Abray North and Horne2.

“This work will enable Mountain View Cemetery to restore military markers to their original design, improve the aesthetic of two large areas within the cemetery and demonstrate the city’s commitment to respectfully commemorating the veterans who are laid to rest in the Fields of Honour,” the staff report said.

The report said funding will initially come from the city then be reimbursed by Veterans Affairs Canada, which has primary responsibility for all veterans’ graves. The Commonwealth War Graves Commission has additional responsibility for graves of those who died in the First and Second World Wars.

The report notes that 216 of the 575 veterans who died at war are buried in the Jones 45 section of the cemetery. The Canadian agency of the Commonwealth War Graves Commission considers the section the most historically significant site in North and Central America.

Up until 1964, approximately 10,000 of the veterans’ graves at the cemetery were marked with sloping military markers on granite foundations.

As the city prepared for the cemetery’s closure in the 1980s, it laid thousands of civilian upright monuments flush in the ground in an attempt to reduce long-term maintenance costs.

Veterans Affairs Canada approved similar work in the Fields of Honour, with granite foundations in the three largest military areas removed and the markers set flush in the ground.

The cemetery re-opened in 2008 after redevelopment allowed for more burial plots and memorials.

The city’s communications department said in an email to the Courier Wednesday that renovation work, which includes the installation of new grave-marker foundations, will also involve lifting markers to their original upright position.

“If council approves and the agreement with [Veterans Affairs Canada] is then signed, we’ll share more information and look to arrange interviews then,” said the city when the Courier asked for more details about the extent of the $2.7 million project.

The staff report said material costs represent approximately 60 per cent of the projected budget, with labour and installation pegged at 15 per cent.

If approved, the project is expected to take four years to complete. Council meets Tuesday to discuss the report, which can be viewed here.

The city has owned and operated Mountain View since 1886. The cemetery occupies 106 acres of land, where the remains of more than 145,000 people are buried, including 14 former Vancouver mayors.

Note: This story has been updated since first posted. The original article said Mountain View Cemetery is the largest military burial site in Canada. That information came from the city staff report. The Courier has since been contacted by the executive director of the Last Post Fund, who said Canada's largest military burial site is in Pointe Claire, Que. at the Last Post Fund National Field of Honour, with more than 17,000 interred veterans.