Mom fought to get own kids back; now she's in other kids' corner

Courage to Come Back recipient Rachel Fehr wants to pay it forward
Apr 5, 2017 11:41 AM By: Martha Perkins 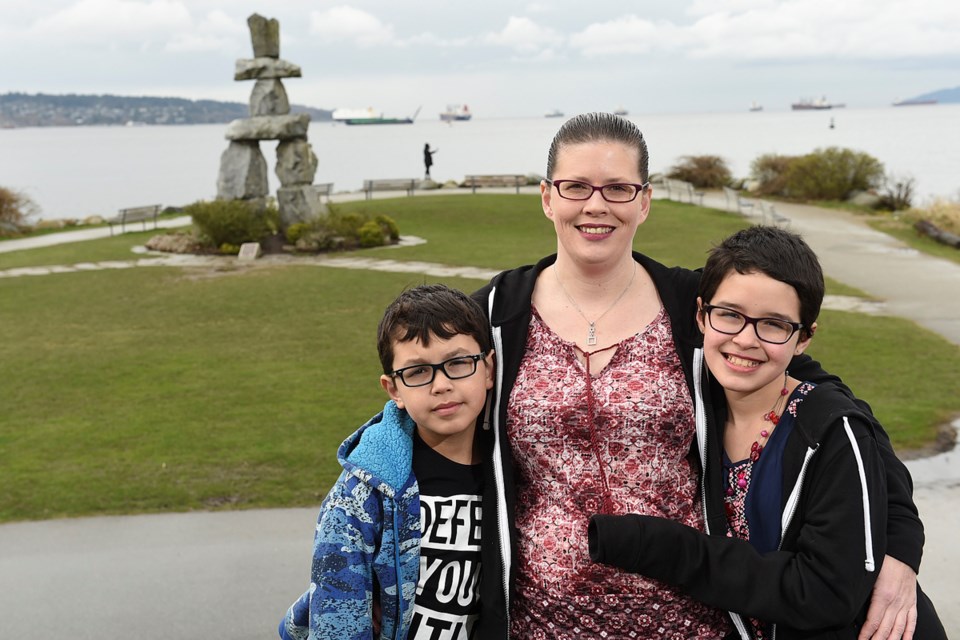 Twenty years ago, Rachel Fehr was homeless and living rough in English Bay. Now the mother of two is determined to give at-risk youth the resources they need to avoid the challenges she faced to get to where she is today.Dan Toulgoet

For every dark period in Rachel Fehr’s life, there’s been someone who stepped in, if only for a few hours, to brighten it. And sometimes that’s all it took to keep her going.

When she was 16 and physically bullied at school, a jujitsu instructor offered her classes and a uniform. He taught her the skills that helped her stand up to the people who were hurting her.

When she was 18 and homeless, a woman who lived in English Bay brought breakfast every morning to Fehr and her friends who were living rough near the beach.

When she was a young mother desperate to get the psychiatric care she needed, she threatened to jump off a bridge. A police officer stayed with her for hours as she waited to be admitted to hospital.

When she was determined to get her son and daughter out of foster care, an unlikely advocate came to her assistance.

And when she had gone three days without eating, Hamaseh Aftase sensed her dejection and despair and offered her a cup of coffee. A week later he asked her for a date and they’ve been together ever since.

Kindness, Fehr says, “keeps hope alive and gives you the one really good day to hold onto when life goes to shit. Without those bright spots I wouldn’t have made it this far.”

Today, Fehr’s goal is to be the person who sheds that light in the world of children who may be experiencing difficulties. Whether it’s giving them the tools and the confidence to look bullies in the eye, or simply providing them with a safe place to hang out, the Surrey resident is hoping to set up a neighbourhood youth centre where everyone can feel welcome.

As the recipient of the Coast Mental Health's 2017 Courage To Come Back award in mental health, she’s also hopeful that by sharing her story, people will step forward to help her.

On May 16, Fehr will join five other recipients on the stage at the Vancouver Convention Centre as 1,500 people salute what Courage chair Lorne Segal calls “the miracles of everyday life.”

Fehr grew up in Maple Ridge. Her father committed suicide when she was one and her mother worked 12-hour shifts as a nurse, leaving young Rachel in the care of her older sisters whose idea of babysitting was to lock her in the bathroom for hours while they drank and did drugs.

Life outside their apartment wasn’t safer. “There’s always one kid in the complex who gets the crap kicked out of them and that was me.”

Emotional salvation came through being involved with Girl Guides, Cadets and then jujitsu. She poured herself into the activities, advancing through her training quickly. “I had no friends so I was always doing activities or reading. The library was my favourite place to go.”

She was a young teenager when she got into alcohol and hard drugs, both as a user and a seller. “Self-medication is considered a choice. It’s not a choice! It’s the difference from getting so down and out you take your own life. It gets you through the day.”

As part of a treatment program in Surrey she met the man who would become her husband and father of her two children. He soon became abusive and threatened to burn the children alive. He didn’t allow her to leave the house with both children as a way of forcing her to stay in the marriage.

One day she managed to get to a Ministry of Child and Family Development office. She was told she had 48 hours to leave the home or they’d take her children into custody. How could she keep them safe if her husband was threatening to kidnap and kill their children? Next stop was the police. They told her that as long as her husband was inside the home, they couldn’t arrest him without a warrant. “What if I can get him to come outside,” she asked. That would work, the police said, and the next day Fehr tricked her husband into coming outside to unload the car. He was charged with assault and convicted.

“I was tired of it,” Fehr says. “This was my fifth abusive relationship and he was the third to choke me. I’d just had enough.”

Life was still a struggle. One landlord wanted sex in exchange for reduced rent. “You’d be surprised how often it happens to single moms in Surrey,” she says. “People automatically assume you’ll do anything for money.”

She went back to producing and selling drugs, never letting her children see that part of her life but often fearful in a dangerous world. Her husband returned, stalking her and using the constant threat of killing the children.

That’s when she agreed to put her children in care. “I did it to keep them alive.”

Fehr’s husband is First Nations which meant the children had to be placed with the Aboriginal Ministry of Child and Family Development. They allowed her to visit with her children only two hours twice a month.

Ever since she was 13, Fehr has been diagnosed with varying forms of mental illness from depression to bipolar disorder. She went on and off various treatments, none of which seemed to work.

Without her kids, Fehr’s thoughts turned to killing herself but, knowing what it was like to lose a parent to suicide, didn’t want to put that burden on her children. “I knew the only way I could get my kids back was to get better and the only way to get better was to force the doctors to help me.”

Experience, however, had taught her that if you tell a doctor you want to get better you’re given a prescription and sent on your way. Fehr needed more serious intervention, something that required being admitted to hospital. Her research convinced her that Vancouver General Hospital offered the best psychiatric care. She chose a bridge near the hospital and threatened to jump off. The bridge wasn’t high so the fall wouldn’t have killed her but there was a huge risk of being hit by a vehicle.

“My intention was to make someone listen. If no one had listened, I can’t speak to what I may have done.”

Much to her frustration, a group of nearby construction workers did not come to her rescue. She had to go to them and convince them to phone 911. “I told them that if someone’s not here in five minutes you’ll be scraping up a dead body.”

Two police officers showed up. “I’ve had cops who call me a whore, just another junkie, not worth the effort.” But the compassion and kindness shown by one of the officers helped her go through the long admission process. “It’s these moments,” she says, “that make you believe you’re worthy. You want to do better and not let down the people who believe in you.”

VGH diagnosed her with borderline personality disorder, which is similar to PTSD. “It affects people in different ways and it’s one of the most commonly misdiagnosed illnesses. You don’t need a psychiatrist; you need a psychological assessment which is what VGH does.”

A few more dramas in her life intervened before she signed up for a 30-week dialectical behaviour therapy program at Surrey Memorial Hospital. “Out of everything I’ve tried — and if there’s a resource, I’ve gone to it — DBT has been the most effective. It’s not about talking about your experiences and rehashing them over and over. They’ve developed these tools that teach you how to reach your goals….

“AA was created in 1950 and hasn’t changed. A lot of treatment programs need an overhaul. DBT is more in tune with people’s needs today.”

Free of drugs and alcohol, and feeling a newfound confidence in being able to cope without them, Fehr doubled down on her efforts to get her kids out of custody.

Her son and daughter had been placed with one of her husband’s relatives and, because they were family, they didn’t have to go through the screening and training that’s required of other foster parents. Fehr knew the children were deeply unhappy and feeling emotionally neglected. But she felt constantly stymied by case workers who seemed to want to set her up for failure and ministry doctors who told her the best thing to do was to give up her children for adoptions. She persevered, doing everything that was asked of her, no matter how maddening it was. (At one point she was criticized for giving her children yogurt and milk in one meal — too much dairy, she was told, and an example of bad parenting skills.) Aided by someone who was closely aware of what was happening inside the foster home, three years and four months after she put her kids in care, they came home with her.

During this interview, her son, who’s in Grade 6, and daughter, who’s in Grade 5, have created a hidden playroom at Gionico MMA in Surrey where Fehr teaches a youth jujitsu program. You can hear her children nattering playfully with each other, acting out imaginative stories as Fehr talks about her dream to give more at-risk people the skills they need to not only withstand bullies but to find better coping tools than drugs or alcohol.

“I call it a youth group because no one wants to fund something that teaches kids how to fight. Every youth centre has a skatepark but skateboarders are a small percentage of the kids that need help,” she says. “Kids who have been bullied need to learn they are capable of standing up to these people. Bullies look for the kid who looks down or avoids confrontation. The kids here are no longer afraid of confrontation. They stop being victims.”

As appreciative as she is for the support of Gionico MMA, it’s a busy, noisy place. Fehr has a location scoped out which would let her do more of the programming with more of the kids who need a safe place to go whether it’s to learn jujitsu, do their home work or hang out. All she lacks is the funding.

“I’d love to turn this into my job,” she says. “From time to time I met people who believed in me and they’re the ones who got me through. I want to pay it forward.”

The Courage To Come Back awards, presented by Silver Wheaton, are May 16. The gala is a major fundraiser for Coast Mental Health, which provides on-the-ground support and housing to people with severe mental illness. You can buy tickets here.