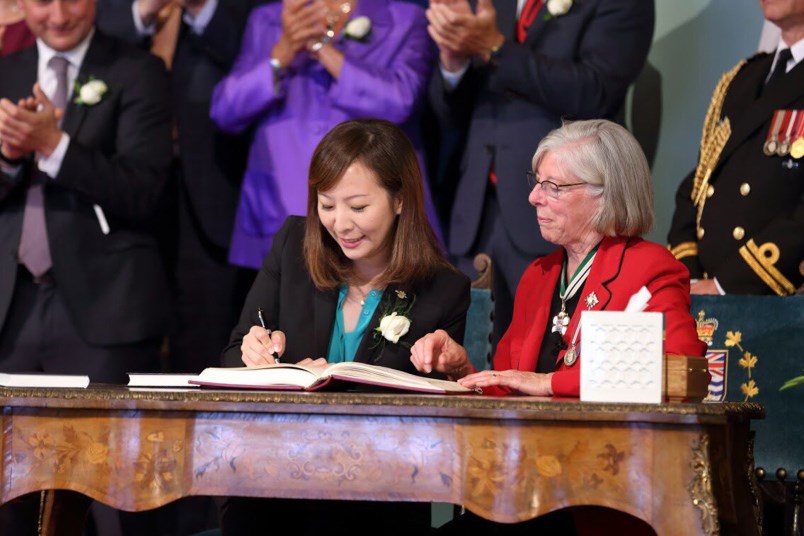 Katrina Chen, NDP MLA for Burnaby-Lougheed, was all smiles as she was sworn into cabinet by Lieutenant Governor Judith Guichon on Tuesday.Contributed

She and her husband have tried to find day care for their three-year-old son, but have been unsuccessful. They quickly learned it would cost between $1,200 and $1,500 a month – money that was simply not in their budget.

That’s when Chen’s husband gave up his job in computer wholesales and became a full-time stay-at-home dad.

“I’m very lucky that my salary can provide for my family, but you know, not every family can do that,” the NDP MLA for Burnaby-Lougheed told the Courier's sister paper, Burnaby Now. “That’s why I want to make sure it’ll be more affordable and more accessible for everybody.”

Chen was named the province’s new minister of state for child care on Tuesday, the only Burnaby MLA to receive a cabinet portfolio. The first-time MLA and former Burnaby school trustee was one of 11 women and 11 men sworn into cabinet.

“I feel great. I’m excited to start working,” she said.

During the swearing-in ceremony, Chen looked a bit emotional. Asked what went through her head at that moment, she said she was reflecting on a phone call she had with Premier John Horgan the day before.

“He told me that he wants to make sure every British Columbian can thrive in our community. I think I was very emotional about that because of (my own journey), coming to British Columbia on my own, working hard and starting a family,” she said. “I think (John) wants to tell everybody, ‘If Katrina can do it, everybody can do it.’”

Chen noted when Horgan asked what portfolios she’d be interested in, she told him she was happy to take anything that would “use the best of her skills.”

“He wants to show British Columbians that we’re here for the people. If you look at our cabinet and our MLAs, it’s a very diverse group. There’s people from all walks of life. ... We want to make sure everyone feels included,” Chen explained.

Part of the local MLA’s job will include following through on the B.C. NDP’s promise to bring in $10-a-day child care.

“I know we’re very committed to creating more child-care spaces, so the three priorities for our government is to provide relief for families ... making sure the services are better and also create good jobs, that when we’re creating child-care spaces that more employment opportunities will happen, too,” said Chen.

Even though Tuesday was a long day, the rookie MLA said she woke up Wednesday eager.

“I’m like, ‘Let’s get to work.’ ... I know there’s going to be a lot of hard work that has to be done before we can make things happen. The challenge will be that we need a lot of time, a lot of effort and a lot of people,” said Chen.

Raj Chouhan, longtime NDP MLA for Burnaby-Edmonds, was not tapped for a cabinet position. He told the NOW he wasn’t surprised and he was very happy for Chen, who has worked on all of his re-election campaigns.

“I’m very proud she ran for (the) first time and got elected with a good margin, and got into cabinet,” he said. “After 15 years, finally we got a government that will stand for the people who were ignored at every level.”

Meanwhile, Anne Kang, NDP MLA for Burnaby-Deer Lake and former city councillor with the Burnaby Citizens Association, was given the position of parliamentary secretary for seniors. She could not be reached for comment by press deadlines.

Members of the Executive Council