More than 1,000 affordable housing units to be built in Vancouver

The Community Land Trust will develop seven city-owned sites
May 4, 2018 11:51 AM By: Jessica Kerr 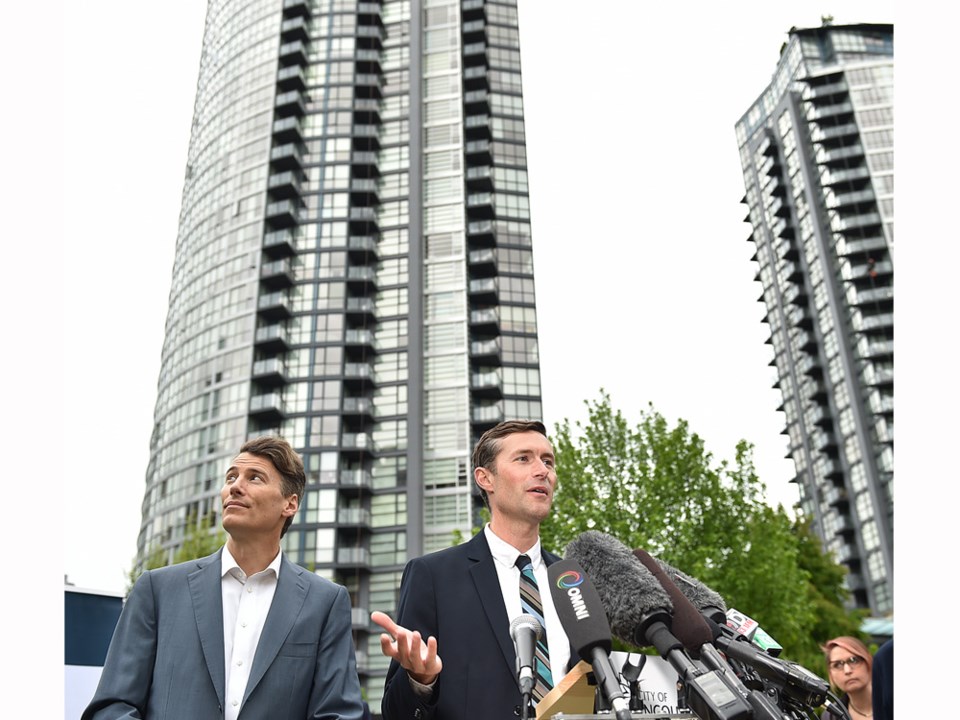 Luke Harrison, CEO of Vancouver Affordable Housing Agency, speaks at a press conference Friday morning announcing an agreement between the city and the Community Land Trust to build more than 1,000 affordable rental units throughout the city. Photo Dan Toulgoet

More affordable housing is on the way.

Vancouver announced Friday morning that seven city-owned sites will be developed by Community Land Trust. Combined, the seven sites, which are located at various locations throughout the city, will bring around 1,000 new affordable rental units targeted at individuals and families earning between $30,000 and $80,000 annually.

“Today is a big day for over 2,000 Vancouver residents who want to put down roots in our city but are struggling to find long-term affordable housing,” said Mayor Gregor Robertson. “With today’s announcement, Vancouver has made the single largest investment in non-market housing of any city in Canada.”

City council this week approved a contract with Community Land Trust. The organization was chosen as the successful proponent after the Vancouver Affordable Housing Agency sent out a request for proposals to develop the seven sites. The trust will design, build, finance, operate and maintain the sites. Once the developments are complete, non-profit operators, such as Atira Women’s Resource Society, McLaren Housing Society and Fraserview Housing Co-operative, will partner with the Community Land Trust to manage the buildings.

“We are thrilled to be partnering with VAHA and the city in this unprecedented opportunity to increase the supply of affordable housing in Vancouver,” said Thom Armstrong, executive director if the Co-op Housing Federation of BC and the Community Land Trust. “This historic partnership with the CLT and the community housing sector will create a legacy of affordable homes we can all be proud of in neighbourhoods throughout the city.”

The developments will be a mix of two- and three-bedroom townhomes, apartments and supportive housing options.

Rents in the buildings will be closely tied to the income levels of residents, ranging from shelter rates of $375 up to $1,800 to $2,000 a month for the larger family units. Robertson said rent for a single individual making in the range of $30,000 a year would be around $750 a month.

“This is the latest step we have taken to make sure that people with low to middle incomes can find a home and build a future in our city,” Robertson said.

The seven sites are located throughout the city with three downtown — at the corner of Burrard and Davie streets, Seymour and Davie, and in the 100 block of West Pender Street. Another two on Vanness Avenue in the Renfrew-Collingwood neighbourhood and at 1001 Kingsway in Kensington-Cedar Cottage. And two more in the East Fraser Lands area — 140 units on Pierview Crescent and 372 units on Marine Way.

Luke Harrison, CEO of Vancouver Affordable Housing Agency, said the seven developments are in various stages of the process, some are building permit ready while others are still in the planning stages. He said that work on the first building is expected to start by the end of the year and all seven sites will be complete by 2021.

Armstrong praised the city for its “leadership in recognizing the need for this kind of investment in the community housing sector and supporting a creative housing solution that will deliver benefits for generations to come.”

The total value of the city-owned land is $130 million. The mayor said that once all seven sites are built out, the value will be closer to $425 million.