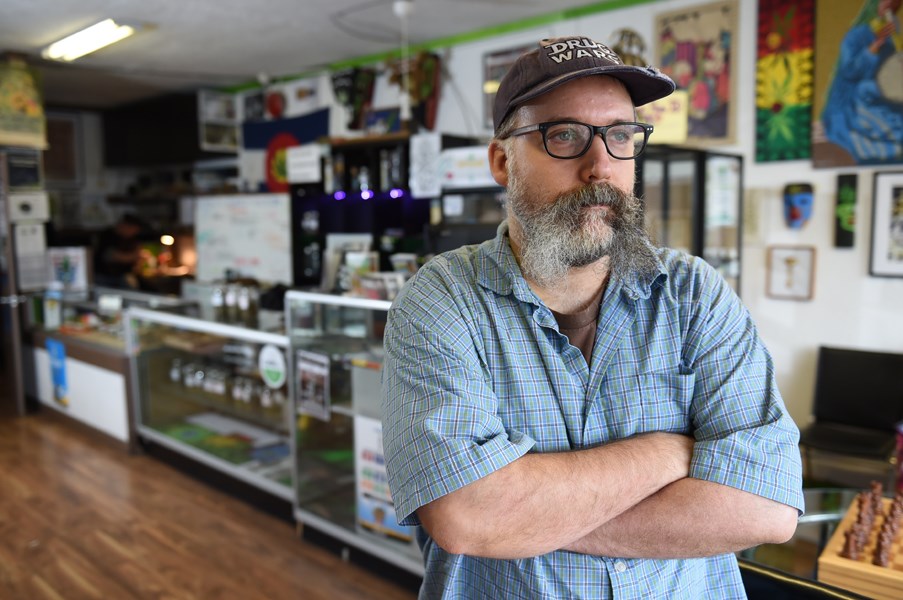 David Malmo-Levine of the Stressed and Depressed Association, which operates a marijuana dispensary at 41st and Knight, has a development permit from the city to continue operating his shop. His dispensary has been robbed three times since he opened in March 2015. Photo Dan Toulgoet

More than 50 illegal marijuana dispensaries continue to operate in Vancouver despite the city issuing 854 tickets to owners who refuse to close their doors, according to new statistics provided to the Courier this week.

The city has also filed 27 injunctions in court in an effort to shut down some of the 54 premises, which are operating without a business licence. The tickets are worth $250 each and, in some cases, were issued multiple times to a dispensary.

So far, operators have paid 205 tickets.

“We’re not going to go backwards and go back to the Wild West,” said Andreea Toma, the city’s chief licensing inspector, in acknowledging the defiance of pot shop owners who continue to operate without a business licence and refuse to pay tickets.

The city’s new business licence regulations for dispensaries came into effect last year. But the city gave existing pot shop operators until April of this year to close their doors. That deadline only applied to operators whose dispensaries didn’t fall into a permitted zone or were too close to a school or community centre.

Toma said some of the operators notified about the city’s plan to seek injunctions have indicated they will fight the city in court, saying it doesn’t have the jurisdiction to impose such a licensing scheme on what has been a federally regulated industry. That argument, along with the federal government’s promise to introduce legislation next spring to legalize marijuana, has clouded the city’s goal to effectively regulate the dispensaries.

Toma said she believes the federal task force on marijuana legalization and regulation will release its recommendations before the end of the year on how the federal government should proceed. It’s not known how any new regulations could affect dispensaries.

“Once that comes out, we’ll need to understand the implications, the timing and what kind of requirements in terms of moving forward, and have us try to get some alignment with the provincial and federal bodies,” she said, emphasizing the city’s goal has always been to regulate the business, not the marijuana.

For now, Toma said, the city continues with its program to have only dispensaries with business licences allowed to stay open. To obtain a licence, an operator must abide by a stringent set of rules, including criminal record checks and a security plan for the store, and pay an annual licence fee of $30,000 for a retail outlet and $1,000 for a so-called compassion club.

David Malmo-Levine, president of the Stressed and Depressed Association that operates a dispensary at 41st and Knight, is one of the operators who received a development permit from the city. Malmo-Levine said he applied to become a compassion club, which must have a variety of services related to health care.

The longtime marijuana activist, who has gone to jail for marijuana possession and once unsuccessfully argued a case at the Supreme Court of Canada, has learned that even abiding by the city’s new regulations gives no guarantee that his illegal product will be safe.

Since Malmo-Levine opened in March 2015, he has been robbed three times, the last heist occurring Oct. 16 when three men and a woman made off with cash and marijuana. Police announced Oct. 25 that two men from Alberta and one from Surrey had been arrested and charged in connection with the robbery. A fourth suspect — a woman — is still at large.

Malmo-Levine said he was ecstatic that police made arrests but wants his five pounds of marijuana and other marijuana products returned. He said the product is worth about $15,000 and will help pay for a $3,000 security consultation he needs to do as part of the process to get a business licence.

“[The VPD] are putting us at risk of not being able to get our licence and not being able to afford the security measures we’re obviously going to need to put in place in order to make this place safe,” Malmo- Levine said by telephone from his dispensary. “We’re going to do everything within our power to minimize the chances of us getting robbed again, and we’d appreciate it if the police would give us our stolen property back to us. There’s no good reason why they can’t do that.”

Malmo-Levine claims police returned stolen marijuana to him after it was taken in a May 2015 smash-and-grab involving a mini-van that crashed through the front doors of his dispensary. Police continue to investigate the August 2015 robbery.

When asked whether Malmo-Levine’s marijuana was returned in the smash-and-grab robbery, Sgt. Brian Montague, a VPD media liaison officer, said in an email to the Courier: “I don’t believe that is the case. Regarding this latest robbery, stolen and recovered personal property will be processed and returned to the owners, but Mr. Malmo-Levine will not be receiving any recovered marijuana products from police.”

Malmo-Levine has been fighting for legalization of marijuana for decades but believes when and if it becomes a reality in Canada, that marijuana will still be a product that is sought after in the black market, much like the re-selling of cigarettes.

Police, meanwhile, say they have not executed any search warrants this year on illegal pot shops. Montague said the police’s approach to investigating the shops remains the same as it has been for several years. A VPD report to the Vancouver Police Board in 2012 said: “It is the view of the VPD that police enforcement against marijuana dispensaries in the first instance would generally be a disproportionate use of police resources and the criminal law. The issue requires a balanced enforcement strategy that considers a continuum of responses from education to warnings, to bylaw enforcement, to enforcement of the criminal law, when warranted.”

At the time of the report, police said there were 29 dispensaries in the city. Two years later, that number ballooned to 100 or more.