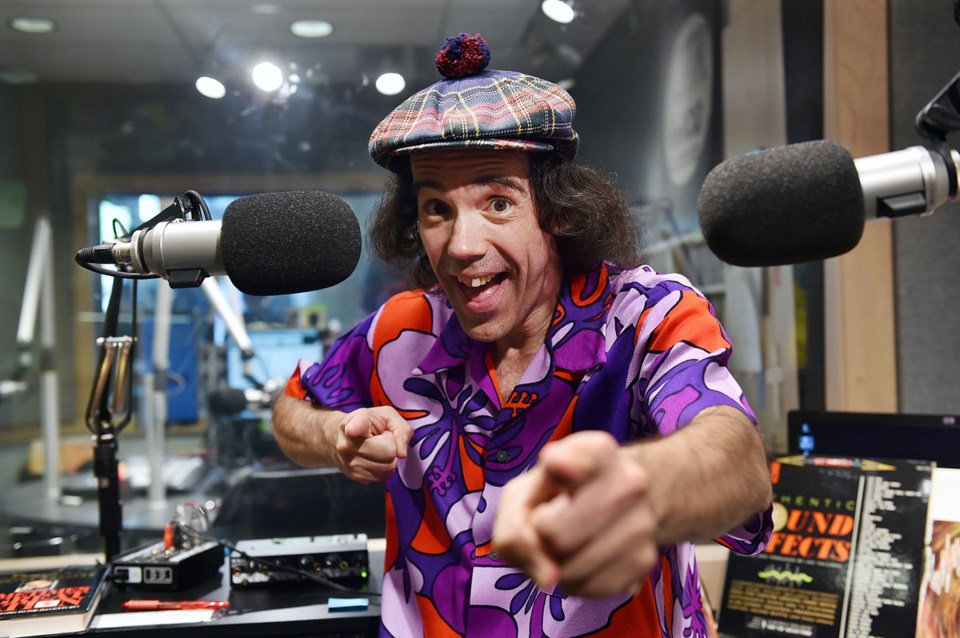 Gonzo journalist, musician and media personality Nardwuar the Human Serviette will celebrate 30 years on the airways of CiTR Radio with 20 hours of continuous programming Sept. 21 and 22, followed by a performance from his band, the Evaporators, Sept. 23. Photo Dan Toulgoet

Nardwuar the Human Serviette has stories. Thirty years’ worth of them.

To mark his improbably strange, hilarious and at times painfully awkward career, the unconventional media personality will serve up 20 hours of continuous programming on UBC’s CiTR Radio Sept. 21 and 22, followed by an all-ages gig with his band the Evaporators at the Hall in East Van on Sept. 23.

The Courier attempted to dissect Nardwuar’s nuts and bolts in a 45-minute long interview that simultaneously went everywhere and nowhere. Tens of millions of YouTube hits, a stint on MuchMusic, a 17-year friendship with Snoop Dogg and haphazard encounters with Mikhail Gorbachev and former Prime Minister Jean Chretien — these are just some of the highlights of Nardwuar’s 49 years on the planet.

But first, the essentials:

“The first time I did an interview I looked up and I saw Art Bergmann’s c***,” he recalled. “And every interview I’ve done since has been pretty crazy, but it’s hard to top seeing c*** at your very first interview.”

Around that same time, Nardwuar asked the Dead Kennedys to play his senior prom. He got a letter back from the seminal punk band’s management suggesting they couldn’t do the gig on account they were touring Brazil. Fifteen years later, Nardwuar’s band the Evaporators were signed to Alternative Tentacles, the record label owned by former Dead Kennedys frontman Jello Biafra.

Biafra has since told Nardwuar the Brazilian tour was a cop-out.

The two now go shopping for records together.

“Jello’s house is amazing, it is filled with records and I used some records as a pillow,” Nardwuar said. “And also, he has a shower in his house [that is] completely see through. So like, you can see the c*** of whoever is taking a shower.”

Stories like that roll off Nardwuar’s tongue like they’re simple, everyday occurrences. There was that time in 1993 when, at a press conference, he asked Gorbachev which world leader wore the biggest pants.

“He kind of smirked and then the mic was cut off,” Nardwuar said. “Afterwards I was rushed by security but I showed them my pass, that I was legitimately there. So they let me go. There was no problem.”

In the 1997 Chretien incident, Nardwuar asked the then-prime minister a hypothetical: if Chretien were 40 years younger, would he be in a punk band, writing protest songs to combat the social ills of the day? Nardwuar mentioned that APEC conference demonstrators had been pepper sprayed, a point lost in translation on the former PM.

Cue up the now infamous, “For me, pepper, I put it on my plate.”

While Chretien and countless others have been game, not everyone is keen on Nardwuar’s shtick: there was the Bach debacle, Beck blacklisted him, Henry Rollins and Nas seemingly hate him and Josh Homme once told him he had the “breath of the ass of an apple.”

“I was like, ‘That is not too good,’ so now I drink water,” he said. “But when I think of the stuff people have said to me, not really too much sinks in.”

Some things have stuck. Each interview starts with the question “Who are you?” and ends with Nardwuar offering up “doot doola doot doo,” while the accompanying artist completes the phrase with “doot doo.” The inspiration for this exchange comes from organists at hockey games.

Another constant is Nardwuar’s dogged research and presenting of gifts to interviewees. He maintains that he pays for everything and conducts all the pre-interview research himself. Pharrell Williams told him their 2008 conversation was “one of the most impressive interviews I’ve ever experienced in my life.”

His antics have paid the bills since his on-air days at MuchMusic in the ’90s. The only “real” jobs he’s had have been leading tours of the CiTR facility and delivering newspapers.

Speaking of papers, Nardwuar’s nearly two-decade relationship with Snoop Dogg inevitably comes up. The oddball pairing has made roughly 10 interviews worth of weirdness, with the rapper even inviting Nardwuar to his California abode.

The stories are endless and will presumably roll out in full as part of his 20-hour marathon running from 9 p.m. on Sept. 21 until 5 p.m. on Sept. 22. The Sept. 23 gig kicks off at 7 p.m. Tickets are available online, at Neptoon, Red Cat or Zulu Records.