Natalino and Franco Bastone could arguably be called the pizza kings of Kitsilano.
May 2, 2017 8:29 AM By: Grant Lawrence 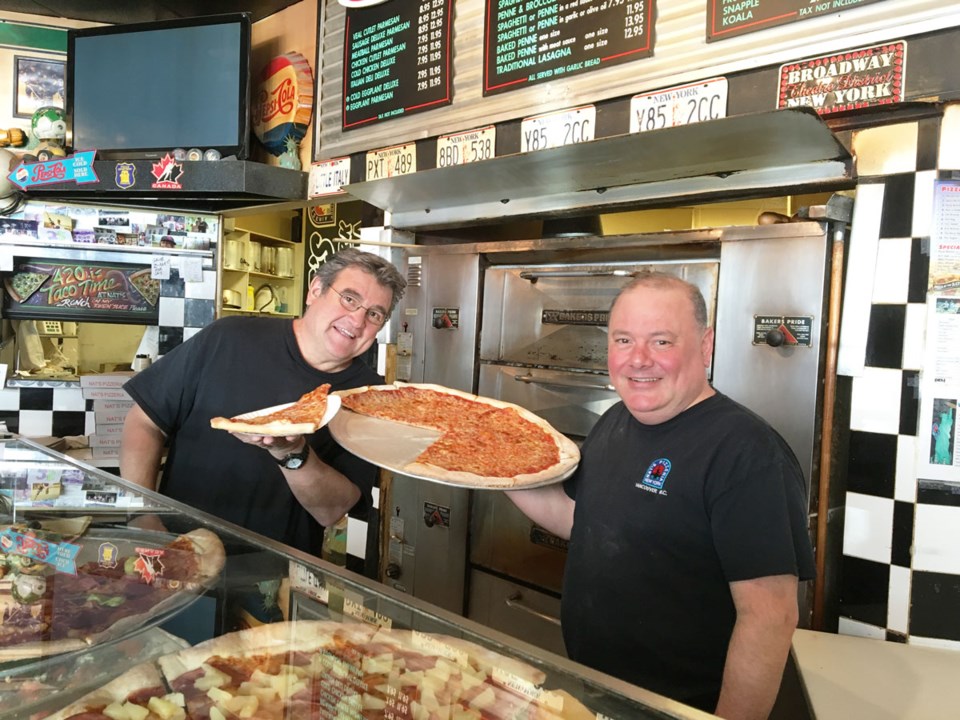 Natalino and Franco Bastone could arguably be called the pizza kings of Kitsilano.

When “Nat” graduated from Kits High in 1978, his high school yearbook picture featured an 18-year-old with a thick moustache and feathered dark hair parted confidently down the middle, and his grad write-up included: “Nat enjoys having parties in parked cars and plans to own his own Italian pizza joint.”

In 1992, after several pilgrimages to his aunt and uncle’s authentic thin-crust Italian pizzeria in New York City, Nat’s dream came true. He and his colourful cousin Franco opened Nat’s New York Pizzeria at 2684 West Broadway, right around the corner from their old high school.

When you walk into the busy shop today, the walls are covered with decades of history: photo collages of people wearing Nat’s Pizza T-shirts in iconic locations all over the world, family photos, various New York memorabilia, and lots of love for the Canucks and other Vancouver sports teams (several Canucks have been regulars over the years). And then there’s the delicious thin-crust pizza. Last month, Nat’s New York Pizzeria proudly celebrated its 25th anniversary.

Like everything Nat does, the location of the shop, so close to their old high school, is by design. An entire high school full of hungry kids (not to mention their parents) is an automatic built-in customer base for a quality pizzeria.

Nat and Franco have given back over the years by employing hundreds of students from Kits High behind the counter. They’ve also established an arts scholarship, and provided thousands of pizzas for various high school events. Nat’s has repeatedly been nominated for, and won, community outreach awards through the years.

In 2000, they opened their second location at 1080 Denman Street in the West End, which is still there, but has since been sold to a former employee, although Nat’s name remains on the sign.

Nat and Franco Bastone have been partners from the start, but the decision to go with Nat over Franco was “by design, too,” explains Nat. “I studied marketing and what’s proven to work is to keep it simple. Nat is shorter than Franco. Kids remember short names. It worked.”

The cousins based Nat’s on their aunt and uncle’s New York pizza, and on a century-old family recipe that stretches back to Italy, involving the perfect Margarita thin-crust pizza in the Italian colours of red (tomatoes), green (fresh basil) and white (their special, healthier, high-moisture/low-fat mozzarella cheese that is water-based, as opposed to oil). And the pair believes that, just like marketing, when it comes to pizza, the simpler the better. “If you walk into any pizza joint in New York and order a slice, it’s gonna be cheese. You want pepperoni, they’ll sprinkle it on top and put it back in the oven. Same with mushrooms. Out here on the West Coast, you want things like pineapple and pulled pork, and we’ll serve you that, but simple is best.”

Over the years, the Bastones have learned to simply appreciate what they have. Business boomed in the 1990s, but the Kits neighbourhood isn’t what it once was. “Families can’t afford to live here anymore. I see my customers being forced to move out to Chilliwack and Maple Ridge.” Despite changing demographics, Nat doesn’t plan on going anywhere anytime soon, though. “I’m pushing 60 now, and I hope to keep making pizza right here until I’m under the ground.”

He is also philosophical when he looks back on his quarter century of serving up slices in Kits: “We made a lot of money in the 1990s. We don’t make money anymore, but we still make a lot of dough, which means we’ll never go hungry”.