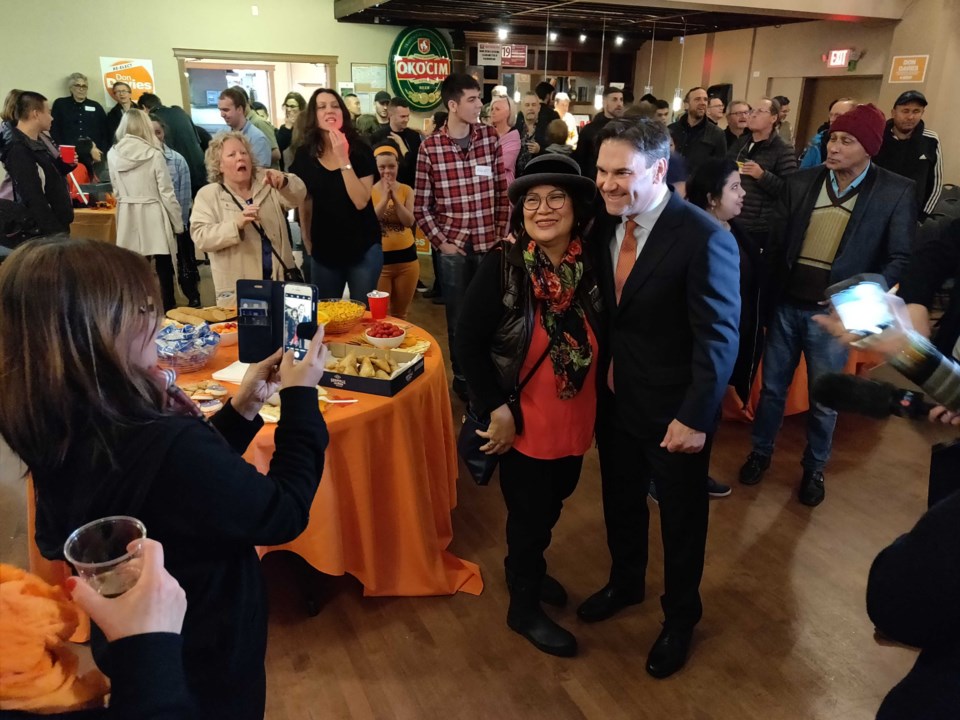 Don Davies arrived to his election night party as Queen’s “We Will Rock You” blasted over the P.A.Kevin Hill

In doing so, Davies becomes the longest-serving MP in the history of Vancouver-Kingsway.

Davies cruised to victory on Monday night, entering his election night party at the Polish Community Centre on Fraser Street with barely 50 per cent of the polls reporting.

Davies arrived as Queen’s “We Will Rock You” blasted over the P.A. and was greeted by close to 100 supporters. It was like déjà vu all over again, as every Vancouver MP who emerged victorious in 2015 did so again four years later, albeit with Jody Wilson-Raybould winning as an Independent rather than a Liberal in the Vancouver Granville riding.

Davies won with close to 50 per cent of the vote, compared to the 46 per cent approval rating he got from voters in 2015.

“I think all politics is local,” Davies told the Courier. “We’ve worked very hard on the ground, things that aren’t always covered by the media — helping a family get a family member here for a funeral or a wedding. If you focus on that kind of work, which we have, and I attend a lot of community events, you build a lot of strong, authentic relationships with many groups in our riding. That gives you a level of trust.”

Liberal candidate and former broadcaster Tamara Taggart polled near 23 per cent as the evening drew to a close, while Conservative Helen Quan hovered near 20 per cent — this, despite Prime Minister Justin Trudeau kicking off the federal campaign alongside Taggart in Davies’ riding in September.

Davies’ running mate Jenny Kwan also retained her seat in Vancouver-East in what shaped up to be the most resounding local win of the night (52 per cent). Kwan captured 50 per cent of the vote when she took over the riding from Libby Davies in 2015.

Kwan and Davies won their ridings by higher percentages than anyone else across Vancouver’s six ridings.

In late 2017, Trudeau’s government announced a $40-billion, 10-year national housing strategy that aims to reduce chronic homelessness by 50 per cent in Canada.

Davies was asked how an MP in Vancouver or anywhere in Canada could affect emission levels among the world’s worst polluters: China, India and the U.S.

He responded by saying the Liberals’ pledge to meet levels set in the 2015 Paris Agreement aren’t on track, and until they are, Canada must focus on domestic climate policy before chastising the world’s worst.

“Once we start doing that, that gives us a moral authority to say to other countries, ‘Look, we expect you do your part,’” Davies sad. “But how do we get taken seriously when we’re not even meeting our own obligations?”

Nationally, the NDP failed to win more seats than the Bloc Quebecois.

Davies looked up at TV screen that showed 25 NDP seats nationally, a number that didn’t change as the evening progressed.

“This is Mr. Singh’s first election,” Davies replied. “I was hoping to do better than the seats we got, but on the other hand we have enough seats to hold the balance of power in Parliament and a good base to build on.”