NDP’s response to drug death crisis a work in progress 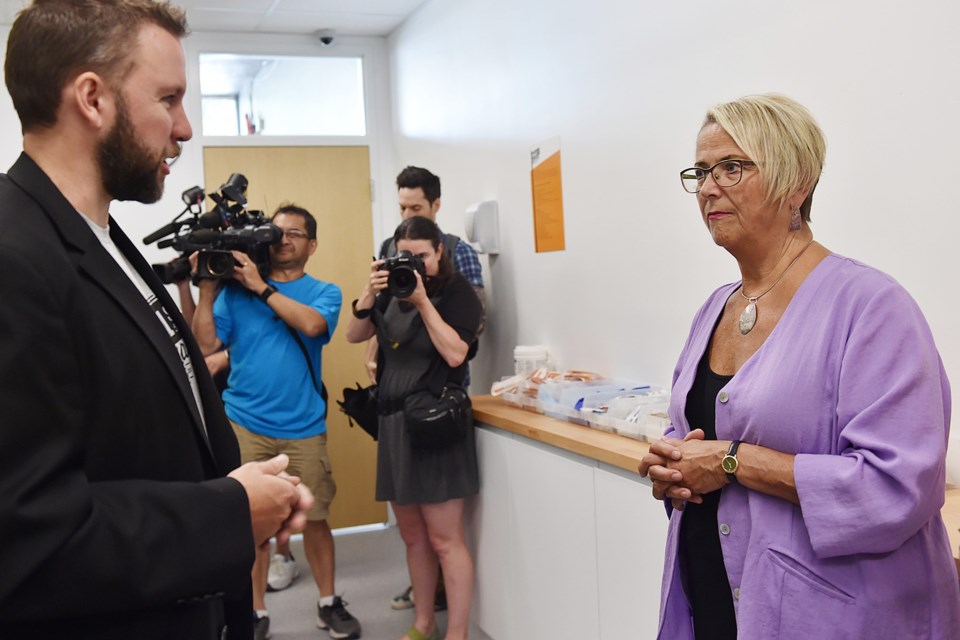 The new minister of mental health and addictions visited Vancouver’s third supervised drug injection site Thursday but offered no specific details about the NDP government’s promise to provide an immediate response to the opioid overdose crisis.

Judy Darcy told reporters at the Powell Street Getaway at 528 Powell St., where a five-booth injection room will open Friday, that she has only been on the job for less than a week. Darcy said she is meeting with people on the frontlines of the crisis and working on a plan to reduce the death toll, which has reached 216 this year in Vancouver.

“I’m talking to people on the frontlines because I want to know what works, what’s been working and what’s still needed – and that’s what I’m trying to find out,” said Darcy before responding to a follow-up question suggesting the needs for more treatment services, more treatment options and outreach programs have been well articulated by Mayor Gregor Robertson, doctors, police, non-profit operators and activists. “My responsibility is to go back to cabinet and propose what we need to do provincially to ensure there’s more support on the frontlines to save lives, and that’s why I’m talking to people on the frontlines because they’re the experts.”

Darcy joined Dr. Patricia Daly, who is Vancouver Coastal Health’s chief medical health officer, and Shayne Williams, the executive director of the Lookout Emergency Aid Society, to tour the small injection site on Powell Street, which received approval from the federal government when the B.C. Liberals were in power.

The facility is located on the ground floor of the Powell Street Getaway drop-in centre near Oppenheimer Park. It will operate 15 hours a day, seven days a week and be overseen by nurses and Lookout Emergency staff. Clients will have access to treatment services through referrals at the facility.

The injection site will replace an “overdose prevention site” at the building that was set up in December under a ministerial order to allow drug users a clean and safe place to inject. It was monitored by peers and wasn’t legally sanctioned. The new site will cost $680,000 per year to operate and staff estimates it will record 200 injections per day.

“We’re excited about having the ability to build rapport and understanding to help reduce that stigma that people face on a daily basis, and make sure that folks aren’t using alone,” said Williams, noting the society is blitzing single-room-occupancy hotels with notice the site opens Friday. B.C. Coroners Service data shows the great majority of deaths occur indoors, often in the low-income hotels.

Daly, who was at city hall Wednesday to advocate for more funding to decrease the death toll, noted the health authority also applied to get an injection site opened on Heatley Street for clients of a new clinic. Insite near Main and Hastings, which was the first legal site to open in North America, and the Dr. Peter Centre in the West End, are the city’s other injection sites.

Vancouver police and firefighters have collected data over the past year showing a trend of more deaths per overdose call occurring in other parts of the city outside the Downtown Eastside. Data released yesterday showed one out of every eight calls in south Vancouver and throughout the Cambie corridor resulted in a death; it’s one in 25 in the Downtown Eastside, where there is a high concentration of overdose prevention sites and people educated on the use of the overdose-reversing drug naloxone.

Daly said the data has prompted the health authority to consider more services for injection drug users outside of the Downtown Eastside. But, she said, the health authority has not applied to Health Canada to sanction legal sites in south Vancouver or other parts of the city.

“We’re going to have to do something, for sure,” she said, noting reports from staff working at community health centres in other parts of the city is that drug users will inject in alleys and washrooms. She also noted fewer drug users in those areas are call 911 for help.