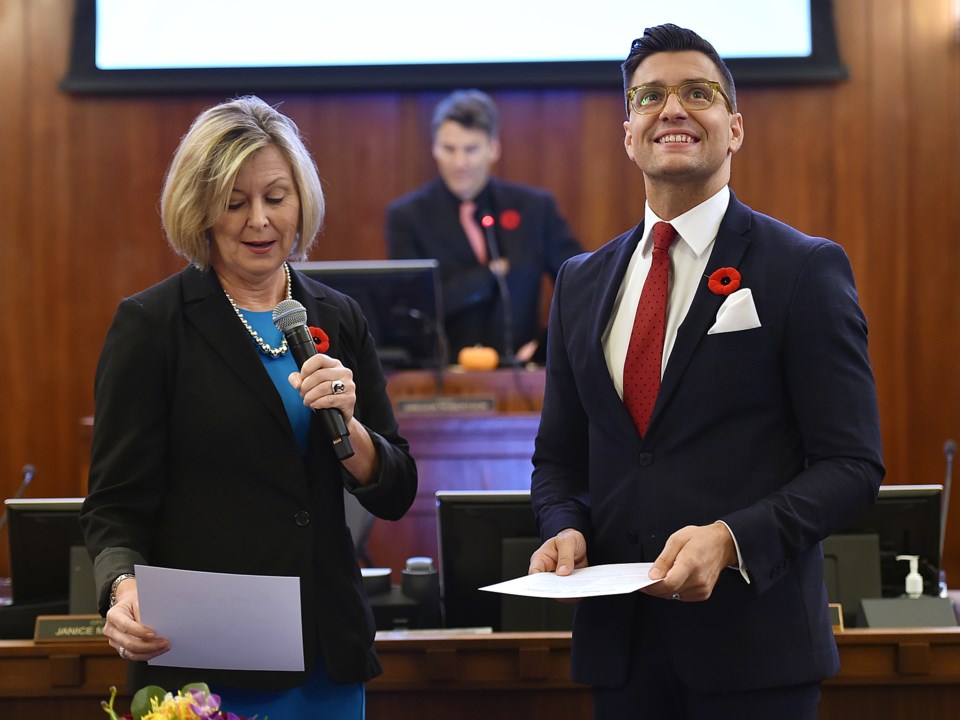 Hector Bremner of the NPA was sworn in Tuesday as the city’s newest city councillor. He won the Oct. 14 byelection. Photo Dan Toulgoet

The Non-Partisan Association candidate who won the Oct. 14 byelection was sworn in Tuesday as Vancouver’s newest city councillor, bringing his party’s presence on the 11-member council to four.

Hector Bremner, who won 28 per cent of the vote in the nine-candidate race, took the oath of office before the rest of council, family, friends, school board trustees, park board commissioners and members of the NPA.

“I will faithfully perform the duties of my office, I will not allow any private interests to influence my conduct in public matters,” said Bremner, 36, as he read the oath of office in the middle of the council chamber.

Applause followed Bremner’s signing of the oath, which officially confirmed his term on council. He then took his seat on the right side of the chamber next to fellow NPA Coun. George Affleck. The other NPA councillors are Elizabeth Ball and Melissa De Genova.

Bremner spent the morning session listening to a staff report recommending council apologize for the historical discrimination of Chinese people. He also heard a progress report on the city’s food strategy and an update on a $10-million plan to build a new seniors’ centre adjacent to the Sunset Community Centre.

Just before the noon break, city staff had begun its recap on a plan from Ryerson Dunbar United Church to rezone its surrounding property to add an eight-storey residential development, townhouses and a community activity centre.

In his first remarks as a councillor, Bremner told council he reviewed the video of the public hearing and was present in the public gallery during some of the hearing. He planned to vote on the plan in the afternoon session.

At the noon break, he told the Courier he was excited to get to work as a councillor.

“It’s amazing — it really is, it’s really fantastic,” he said. “It’s a bit surreal to see all this hard work finally come to fruition. It really all culminates in that moment [of being sworn in].”

The Edmonton-born Bremner is a vice-president of public affairs for the Pace Group. He ran unsuccessfully with the B.C. Liberals in New Westminster in 2013 and is a former assistant to then-housing minister Rich Coleman. He also worked as an oil and gas lobbyist.

During the campaign, Bremner told the Courier he would commit to donate his $82,000 councillor salary this year to “whatever worthy cause.”

Asked Tuesday about that commitment, Bremner said he “didn’t run for the money” but to focus on creating more affordable housing for Vancouver.

“We’re still trying to figure this all out, but I do plan on trying to make as much of a contribution as possible,” he said of donating his salary.

The byelection that Bremner won was necessary because former Vision Vancouver councillor Geoff Meggs resigned in July to take a job as chief of staff to Premier John Horgan. Vision continues to hold a majority with six seats to the NPA’s four. Adriane Carr is the Green Party’s lone councillor.

The same byelection included the election of a new nine-person school board, which was sworn in Monday night. It was the first meeting in more than a year, after the previous board was fired last year for not balancing its budget.

Bremner said he will likely seek re-election in next October’s municipal election. His party has spent $1 million or more in recent campaigns. So has the ruling Vision Vancouver, whereas the Green Party and other smaller parties spent $100,000 or much less.

The provincial government promised Monday that rules will be in place to ban union and corporate donations from civic campaigns, and limit individual donations to $1,200.