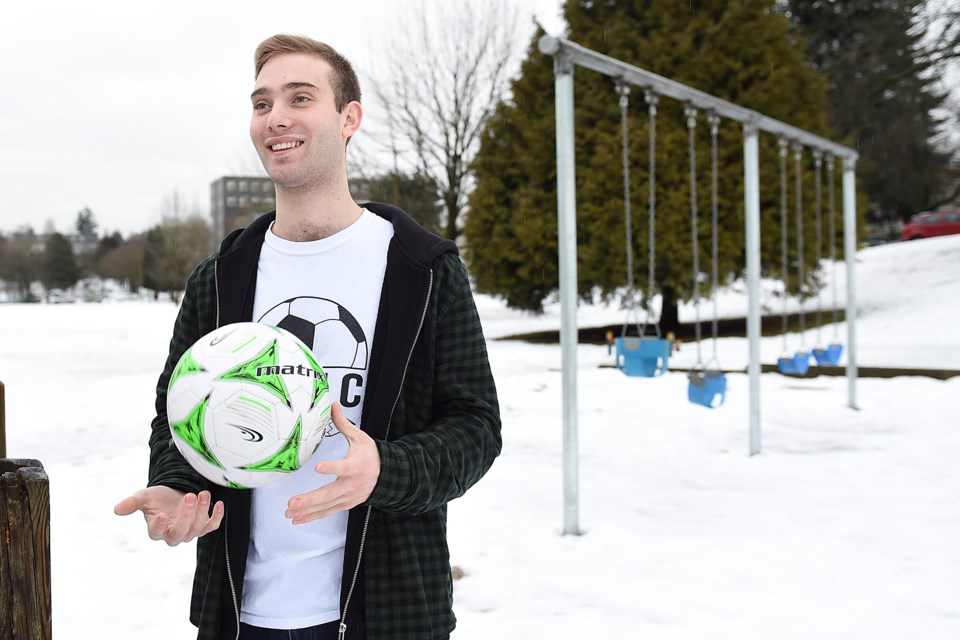 Duncan Bernardo is one of the co-founders of the East Vancouver Newcomer Camp. The camp, which ran for the first time last summer, helped refugee children learn English and common sports and playground games. Photo Dan Toulgoet

Duncan Bernardo was 11 when he moved to Spain. He didn’t know a word of Spanish or any other children.

His route to friendship? Sports.

“What allowed me to make and build relationships was the fact I already knew how to play soccer,” the 19-year-old UBC student told the Courier. “I went to the local public school and because I knew how to play soccer — although I didn’t know how to speak Spanish — I could still join in their games. Once I’d gotten better at Spanish, I was able to turn those loose friendships into stronger relationships.”

News of the Syrian refugee crisis got Bernardo thinking about his childhood experience and how he could help. Dakota Koch, one of his old high school friends from Eric Hamber, also wanted to do something for refugees.

So together they founded the East Vancouver Newcomer Camp, which ran last summer in partnership with Mount Pleasant Neighbourhood House.

This summer, they intend to run the free camp again, possibly in an expanded format, and they’ve launched a fundraising campaign to help with its operation.

The camp was designed for Syrian refugee children who didn’t speak English and might not be familiar with organized sports or recess playground games, according to Bernardo.

“We thought we’d start a summer camp for six to 12-year-old recently arrived refugee children and teach them how to speak English but also how to play soccer, T-ball, basketball and a variety of playground games,” he said.

It was scheduled twice a week from 10 a.m. to 3 p.m. for seven weeks in July and August. Participants met at the neighbourhood house on Tuesdays and at Queen Alexandra elementary on Thursdays and were given bus passes so they could attend.

Last year, staff worked on a volunteer basis and many had childcare and educational experience. A few spoke Arabic and helped with recruitment and language barriers. One volunteer, who is originally from Egypt, was involved in a similar program at an orphanage in that country.

“She was really good with the kids,” Bernardo said.

The camp was funded through donations from local businesses and individuals.

The tentative plan for this summer is to possibly run the camp for four days a week, depending on demand.

Details of how it will operate are still in the works and won’t be finalized for a couple of months.

But the goal is to fundraise $20,000 towards its operation to help cover expenses such as bus passes, lunches, snacks, additional sport equipment and educational supplies.

Bernardo says the camp is important because it helps children build skills to make friends.

“If they aren’t able to make friends… more than anything it’s just hard on them and they won’t enjoy it here,” he said. “Apart from that, a big part of being in Vancouver and Canada is inclusiveness — including everybody. And if people aren’t able to be included in the games or what’s going on because they don’t speak the language or don’t know how to do something, we ought to change that.”

The response from last year’s participants was positive, according to Bernardo. Some said it was the most fun they’d ever had in their lives, while a six-year-old who hadn’t been to school, and didn’t know how to write in Arabic or English, learned to write his name, the ABCs and the colours.

“We were pretty pleased,” said Bernardo.

To donate or for more information about the camp go to eastvancouvernewcomercamp.org.