A 2009 report commissioned by City of Vancouver estimated the Georgia and Dunsmuir viaducts could last until 2024 without major rehabilitation and pegged the cost of replacement at less than $100 million.
Sep 23, 2015 11:32 AM By: Bob Mackin 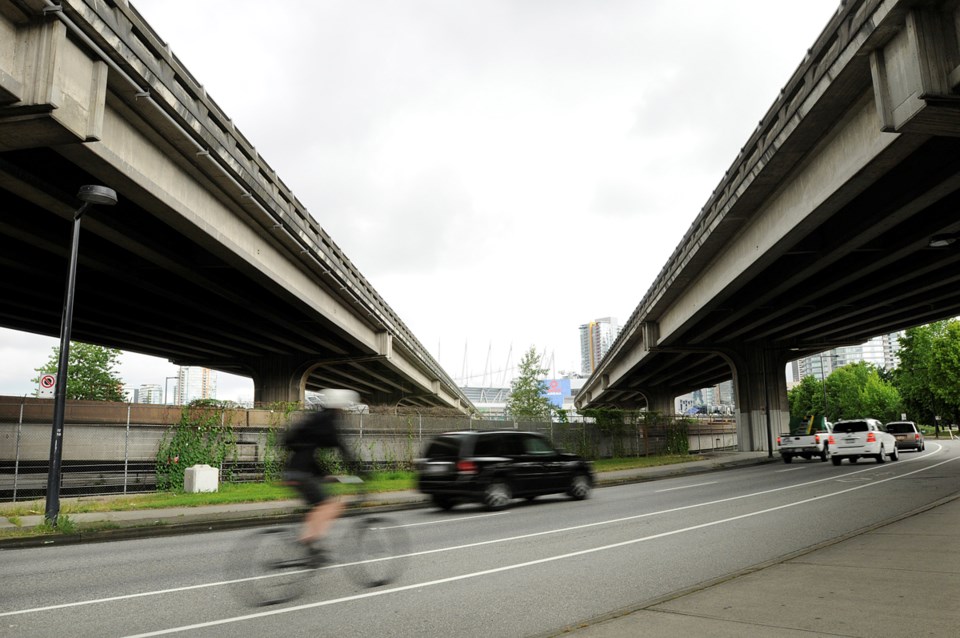 A 2009 report commissioned by City of Vancouver estimated the Georgia and Dunsmuir viaducts could last until 2024 without major rehabilitation and pegged the cost of replacement at less than $100 million.

Associated Engineering noted deterioration of the concrete bridge rail, deck joints and cracking in girders, but concluded the bridges were “generally in good condition.”

“There do not appear to be any significant functional deficiencies at present that would limit the life expectancy [of the viaducts],” said the report, obtained by the Courier last December, after the civic election, in response to an October 2013 Freedom of Information request and subsequent appeal to the Office of the Information and Privacy Commissioner.

However, city staff said in June of this year that they would recommend to city council in September that the viaducts be demolished and replaced with a new street network. A June 2013 report to council estimated that could cost as much as $132 million and free-up 10 acres, worth $110 million, for development. Acting city engineer Jerry Dobrovolny told the Courier Sept. 11 that findings of new reports would be presented to council in October or November.

Associated Engineering estimated the remaining service life of the structures to be 15 years before major rehabilitation or replacement is required. It estimated $43.2 million to replace the Dunsmuir viaduct and $50.29 million to replace the Georgia viaduct. The total in 2015 dollars would be $103.72 million. By comparison, the Powell Street overpass was built in 2014 for $50 million.

Dobrovolny downplayed the 2009 Associated Engineering report because it was based on visual inspection.

“In a whole number of areas we’ve done additional studies over the last two years,” Dobrovolny said in an interview. He would not provide updated cost estimates because the various in-depth reports “are still being finalized.”

The September 2011 report by Halcrow Consulting was published on the city website and it offered conclusions similar to Associated Engineering — that the majority of the structure is in reasonably good condition.

“The section that crosses Main Street requires some minor retrofits in the short term and there are some other maintenance and repairs that are required,” Halcrow said, estimating the annualized cost of bridge maintenance at $600,000 a year. “The structures meet the design and loading standards at the time of construction, but do not meet current seismic design standards. Having said that, and due to the nature of the structural system [girders built into pier caps], the structure should perform relatively well in an earthquake.”

Halcrow estimated $25,000 per year maintenance, $200,000 in short term retrofits, $1 million for barrier rehabilitation, $5 million for seismic upgrades and another $3 million for deck and joint rehabilitation. “If the viaducts were retained, it is estimated with the above maintenance they would have a remaining service life of 40-plus years,” said the Halcrow report.

There would be other costs. The Halcrow report, quoting Golder Associates, said remediation of toxic soils would likely cost $4 million to $8 million “if the full area was remediated to a residential standard.”

The city originally withheld information about the viaducts, claiming exemptions for policy advice, protection of city finances and third-party trade secrets and fear of harm to law enforcement and public security. It relented almost three months after an adjudicator ordered full disclosure in September 2014 of Burrard Bridge engineering reports, in a ruling that said the city’s claim the bridge would be at risk of a terrorist attack was mere speculation.