NEWS: What is your definition of affordable housing?

Last Thursday morning, around the time no fewer than 20 speakers were signed up to talk to city council about its plan to tackle Vancouvers affordable housing crisis, 22-year-old Thomas Falcone was on his way to the airport, his 29-year-old fiancée,
Aug 2, 2011 9:00 PM By: Vancouver Courier Staff 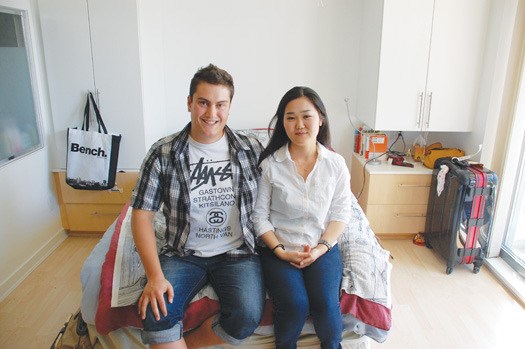 Last Thursday morning, around the time no fewer than 20 speakers were signed up to talk to city council about its plan to tackle Vancouvers affordable housing crisis, 22-year-old Thomas Falcone was on his way to the airport, his 29-year-old fiancée, Mari Takahashi in tow.

The couple had a list of errands to complete before they were to tie the knot on Saturday in Falcones parents backyard in Tswwassen. First on the list: picking up maid of honour Seri Kaeriyama, who had flown in from Japan.

At 10:15am council was about three speakers through the list of housing advocates, lawyers, non-profit representatives and social services workers. Falcone and Takahashi were at YVR, waiting for Kaeriyama to debark.

By 11:30, council had heard a clear outline of low-income housing demands: 5,000 units of social housing, rents of $375 or less to align with provincial income assistance, and a city-led campaign calling for a national housing strategy.

Falcone, Takahashi and Kaeriyama were on their way back to Eden, the 24-storey Richards Street condo building where the couple rents a studio apartment for $1,225 a month. They arrived about noon and gave their house guest a tour of the apartment all 406-square-feet of it. Then the bride pulled a cold beer from the fridge, offered it to Kaeriyama and lifted a translucent garment bag to reveal a gauzy, peach-tinted wedding gown. The two women chattered excitedly in Japanese.

Renters are busy people. Perhaps thats why none showed up at city hall that day to speak to the Housing and Homelessness Strategy to 2021.

The plan is not just about housing the citys most vulnerable, it also attempts to relieve pressure on the much larger middle the neither very rich nor very poor.

The absence of renters at Thursdays meeting didnt seem to surprise to Abi Bond, the citys assistant director of housing policy and author of the plan.

She spoke for them instead. She told council of the plight facing renters, of the anticipated loss of 15,000 rental units over the next 10 years that would further squeeze a housing market where the vacancy rate has hovered under one per cent for decades.

She told council of the difficulty of accommodating renters, that theyre a tricky group to serve. That they comprise more than 50 per cent of city residents but have very little in common. That theyre not an organized group, and unlike low-income residents, lack advocates ready to come to council with facts and figures.

She outlined her ideas for easing their burden. The city could establish a rent bank, she said, enact more inclusionary zoning and try to entice the private sector to build rental suites, even though theres not much profit to be had there.

The city wont get far without buy-in from senior government, non-profit partners and the private sector if it is to secure a supply of affordable rental housing, she said. She stopped short of saying just what affordable means.

The Canadian Mortgage and Housing Corporation defines it as 30 per cent or less of household income, but Bond wouldnt attempt a specific definition.

Its not static, she said after her presentation. Putting a dollar figure on it would be pointless, she continued, especially for a 10-year plan laid out on the verge of a municipal election and another possible recession.

Councillor Raymond Louie was a bit more bold. He defined affordable as $900 for 400-450-sq.-ft. in a Vancouver Sun article last week. But that amount is a minimum rate needed to entice developers to take part in the citys incentive program for building new rental, he later clarified. For many, $900 might not be affordable he conceded, just more affordable.

In Yaletown, Falcone had his own definition: Its when you can pay your rent every month without making major sacrifices, he said, standing in his black marble galley kitchen. He added that he didnt go to council because he felt his interests were well represented.

Below him, on Richards Street, a trio of construction workers putting in a new water main offered their own definitions of the term.

For 37-year-old Johnnie Caleta, who lives out by the PNE, it was $500 for his moms basement suite.

For Tswwassen resident Brittany Morrison, 22, it was more about proximity to amenities and childcare for her 10-month-old son than a dollar amount.

I dont know, I dont really factor that part into it, she said.

For Coquitlam resident George Lawson, 51, its enough room for future grandkids to come stay with their grandpa.

For city officials, who, by 2pm had seen council adopt the plan, its now a moving target theyll have to figure out how to reach.