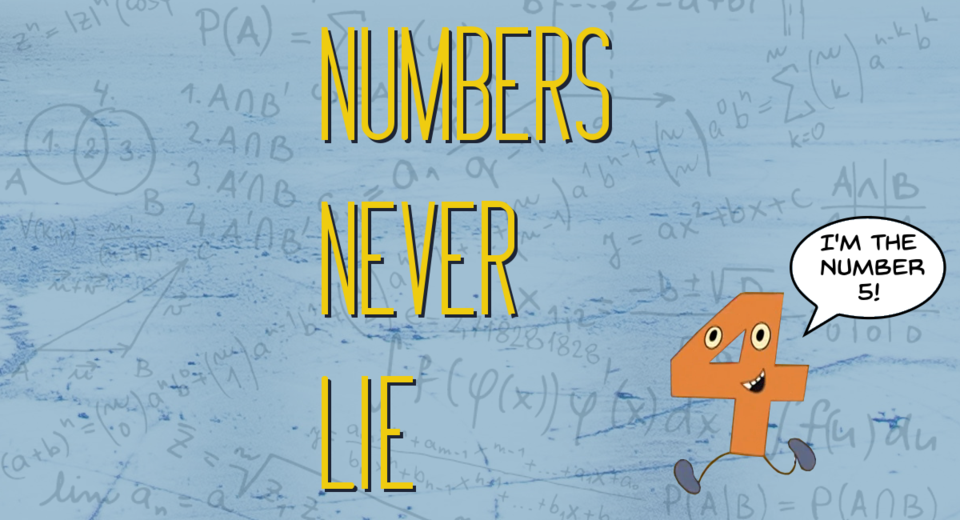 The title of “Numbers Never Lie” is a little bit tongue-in-cheek, as suggested by the Clone High reference in the header image. The reality is that numbers don’t tell any stories by themselves. Of course numbers never lie, but they don’t tell the truth either. Numbers don’t say anything at all.

In sports, however, numbers seem to tell copious amounts of stories. It starts with a simple score. If you know one team beat another by 5 goals to zero, you can immediately imagine how the game went: one team dominated the other.

If you know one more number, say the shot count, that might change the story. Say the team that won 5-0 was actually out-shot 47 to 20. Suddenly the winning team didn’t dominate the losing team, but another story emerges: a goaltender putting together an incredible 47-save performance to steal a win.

The numbers aren’t telling those stories, of course: you are.

If you combine watching the game with these numbers, you can hopefully tell a more nuanced story. Maybe the winning team dominated the first period, scoring 5 goals on just 17 shots, then focussed on shutting down their opponents for the rest of the game. The goaltender faced 47 shots, but all from the perimeter, with little traffic to cause him trouble. The story changes.

One of the biggest benefits of statistical analysis — in many areas of life, not just sports — is when they contradict the story we’ve constructed from watching the game. The numbers don’t do the contradicting by themselves: they have to be properly selected and interpreted, so we know that we’re telling the right story and not being mislead by numbers that don’t matter.

When the story we tell using numbers contradicts the story we assume to be correct, that’s when things get interesting. That’s when you potentially find a diamond in the rough: a depth forward that has top-six potential or a defenceman that doesn’t get noticed, but shuts down even the toughest opposing forwards. Perhaps it guides you to a change in your systems or a lineup adjustment that you otherwise wouldn’t have considered.

And sometimes those contradicting numbers are just plain confusing.

For instance, what if I told you that the Canucks best defence pairing last season was Alex Biega and Derrick Pouliot?

That sounds wrong, doesn’t it? Biega is a journeyman defenceman who certainly tries hard, putting out the consistent effort and edge that has granted him the nickname of The Bulldog. Pouliot, meanwhile, is a former top prospect that never quite found his game with the Pittsburgh Penguins and has immediate and obvious defensive deficiencies, despite his clear skill.

Neither defenceman was even in the Canucks’ opening night roster and Biega was a frequent healthy scratch throughout the season. When they were in the lineup, they were pretty definitively on the bottom pairing, particularly when they played together. There’s no way they were one of the Canucks’ better defence pairings, let alone their best.

When you look at the numbers, however, it’s hard to avoid seeing a different story. Here is every Canucks defence pairing that spent at least 100 minutes together at 5-on-5 last season. All statistics come from Corsica and Natural Stat Trick.


This is a whole host of numbers, so a quick explainer:

The last column (OZS%) is offensive zone start percentage: if that’s above 50%, that pairing started more of their shifts in the offensive zone than the defensive zone, and vice-versa.

I’ve added some shading to the chart to show which pairings are better than league-average for defence pairings in each category. The darker the shade, the better. You’ll notice one pairing is gold almost all the way across: Alex Biega and Derrick Pouliot.

Biega and Pouliot led or was second in in almost every single category among Canucks defence pairings. They had the best corsi-for percentage together and it wasn’t particularly close. Offensively, their numbers pop off the page: the Canucks drastically out-shot their opposition with them on the ice and took far more shot attempts than with any other pairing on the ice.

What’s more surprising is their defensive numbers. They allowed the second-lowest rate of shot attempts and shots on goal. No other pairing allowed fewer goals against.

The lone area where they’re not better than league average is easily excusable. The Canucks didn’t score a lot of goals with Biega and Pouliot on the ice, but judging from their Expected Goals, it really seems like they should have. Goals are so volatile in any case that they’re not a reliable indicator of future performance, particularly when it comes to defenceman that can have only limited influence compared to forwards when it comes to scoring goals.

So, going off of these numbers, Biega and Pouliot were outstanding together last season. It’s not like they only started in the offensive zone either: their zone starts were evenly split between offensive and defensive zone, unlike when Pouliot was paired with Ben Hutton.

How in the world does a pairing composed of two bottom-pairing defencemen put up such gaudy numbers?

Let’s look at the top defence pairings in the NHL by relative corsi percentage. This would be the pairing’s corsi relative to the rest of their team. The cutoff for this chart was at least 200 minutes spent together at 5-on-5 last season.


We see some interesting defence pairs here, including some of the top pairings in the NHL: Drew Doughty and Jake Muzzin; Dougie Hamilton and Mark Giordano; Anton Stralman and Victor Hedman; Mattias Ekholm and P.K. Subban; Ivan Provorov and Shayne Gostisbehere.

Leading them all, however, is Alex Biega and Derrick Pouliot.

So, that’s odd, but they’re not the only odd pairings showing up amongst some of the best in the NHL. Radko Gudas and Travis Sanheim don’t look like they belong. Cody Ceci and Mark Borowiecki really look out of place.

That’s where one more piece of context — one more number — can help tell the story. Regrettably, it’s one I don’t have readily available: quality of competition.

The reality is that even the most sheltered player in the NHL will inevitably face tough competition, while even shutdown defencemen matched up against top lines will end up on the ice against a fourth line from time to time.

The other aspect to consider is that when a player faces weaker competition, they’re usually playing with weaker linemates. Fourth lines tend to face fourth lines more often. The opposite is also true: if you’re regularly facing the opponent’s first line, you’re probably playing with good players.

When it comes to Biega and Pouliot, however, it’s hard to avoid telling yourself a story about quality of competition when you look at their numbers.

When Biega and Pouliot were paired together — for about 17 complete games during the season — they were on the third pairing, generally playing against the type of competition a third pairing usually faces. That means other third pairings on defence and as little as possible against the opposition’s first line.

For instance, when the Canucks faced the Washington Capitals on October 26th, Biega and Pouliot played less than a minute together against Alex Ovechkin at 5-on-5. The forwards they saw the most were Devante Smith-Pelly, Jay Beagle, and Nathan Walker: the Capitals’ fourth line.

Against the Vegas Golden Knights on March 20th, Biega and Pouliot played just 15 seconds together against Jonathan Marchessault and William Karlsson, but played nearly nine minutes against Cody Eakin at 5-on-5.

That certainly provides some context to Biega and Pouliot’s numbers together, but just how much does that context mean?

Biega and Pouliot are far from the only third pairing around the NHL to be sheltered from playing against tough competition. The story remains: even if they were playing against weaker competition, they got better results against that competition than any other pairing in the NHL.

Some might want to explain away Biega and Pouliot's impressive numbers by scoffing at the level of competition they were facing, but that's still NHL competition. In any case, keep in mind the caliber of teammates they were playing with: the Canucks were not exactly a murderer's row of talent last season. The numbers they put up were particularly impressive given the Canucks' struggles.

Does this make Alex Biega and Derrick Pouliot one of the best defence pairings in the league?

No, of course not.

But does it make them one of the best sheltered third pairings in the league? It might.

Just why did they work so well together in that sheltered role? Keep in mind, they weren’t sheltered in terms of zone starts — compare their starts to that of Radko Gudas and Travis Sanheim.

It may have to do with speed.

Biega and Pouliot are far from the fastest players in the NHL, but they’re also not slowpokes. And, against other third pairings and bottom-six forwards, you could argue that they move the puck a lot faster than their opponents.

Biega was aggressive with his skating this past season, jumping up more often in the rush, even if it didn’t result in many points. What he isn’t great at is exiting the zone with possession. That’s where Pouliot’s strength lies, however, as he’s good at skating or passing the puck out of the defensive zone.

The two of them together were aggressive with their puck movement up the ice, either with their skating or passing. Against lesser competition, they were able to quickly transition up ice, spending as little time as possible in the defensive zone.

Perhaps against tougher competition, that advantage in speed would evaporate, as top pairing defencemen and top line forwards move and think at a faster pace. But that’s just a theory.

There are a couple other arguments you could make from Biega and Pouliot’s numbers. Perhaps they don’t need to be sheltered as much as they were and could capably face tough competition. Or, if not, perhaps it would be better to have a third pairing that didn’t need to be quite as sheltered. Or maybe this is that fabled "chemistry" I've heard so much about. That’s something for a coaching staff to experiment with and decide for themselves.

Does Biega and Pouliot’s presence at the top of chart for relative corsi mean they should be a top pairing on defence for the Canucks? Of course not. That’s a naive story to tell with those numbers. It does, however, suggest that they should be given a long look as a potential third pairing next season.