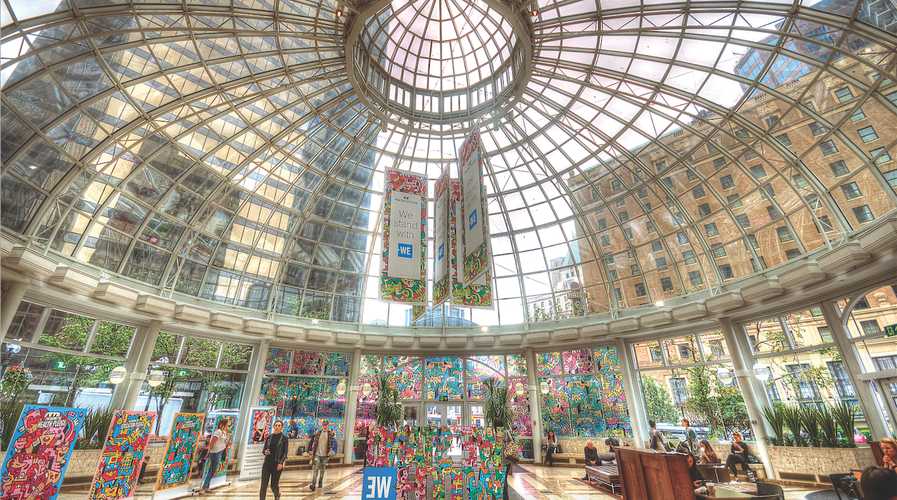 The Ontario Pension Board and the Workplace Safety and Insurance Board have teamed up to buy a 50 per cent stake in CF Pacific Centre. Photo Chung Chow

Stakes in two major Vancouver malls have been sold within as many weeks, although while one came as a surprise, the other makes sense, according to observers.

It is Cadillac Fairview’s decision to sell a 50% stake in its CF Pacific Centre that confuses Patterson.

“Cadillac Fairview’s strategy could be to spread the risk, but there’s no risk with Pacific Centre,” he said. “It’s the best mall and the only major shopping centre in downtown Vancouver. It has really high sales per square foot and strong retailers.”

Indeed, Oakridge and Pacific Centre are the two most productive malls in B.C. with sales of $1,537 and $1,523 per square foot, respectively, according to a December study by Retail Council of Canada. Only Toronto's Yorkdale Shopping Centre is more productive in Canada, with $1,650.85 in sales per square foot.

Cadillac Fairview’s decision is also curious because it might make Pacific Centre harder to manage.

The subsidiary of the Ontario Teachers’ Pension Plan announced January 20 that it would sell the stake in CF Pacific Centre as well as 50% stakes in 12 other properties, which combine to have four million square feet of leasable space, for an undisclosed sum to Ontario Pension Board (OPB) and the Workplace Safety and Insurance Board (WSIB).

Cadillac Fairview now manages all of CF Richmond Centre, and it is expected to continue to manage CF Pacific Centre.

“I’m sure that before [Cadillac Fairview, the OPB and WSIB] struck the deal they would have ironed out how they would manage Pacific Centre,” said Thomas Fung, who owns Richmond’s Aberdeen Centre.

“It must have been a very high price in order for Cadillac Fairview to sell.”

Fung told Business in Vancouver that he has never considered selling a 50% stake in his mall because it could make the property harder to manage.

Several groups have approached him with offers to buy the mall in the past year, but Fung said he has no interest in selling.

Partnering with Cadillac Fairview makes sense for OPB and WSIB given that the two organizations do not have mall-management divisions.

The arrangement is similar to the only other large Metro Vancouver mall to have joint ownership: the McArthurGlen Designer Outlet Vancouver Airport.

The Vancouver Airport Authority (VAA) entered into a partnership with European mall developer McArthurGlen Group to build and manage the mall on Sea Island because the airport authority had no experience in that sector while McArthurGlen did.

Malls have been popular assets for property managers.

Shape Properties CEO John Horton told an Urban Development Institute luncheon last year, when asked what he would do if he could have anything he wanted, that he would buy more local malls on transit.

“I would phone up Ivanhoé Cambridge and convince them to sell me Oakridge,” said Horton, whose company owns Metro Vancouver malls such as Burnaby's Brentwood Town Centre and Lougheed Town Centre.